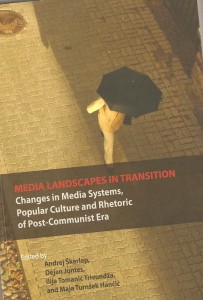 “Denationalization and privatization are among the fundamental prerequisites for the development of new (democratic) media systems. Nearly a half century after World War II, East Central European media systems were framed in a political, institutional, economic and legal structure altered after the fall of communism. It was believed that freedom of ownership is the guarantor of democracy and free press. As such, privatization of the media meant less dependence upon government. While the political views of the first non-communist governments differed widely, most of those governments opted for rapid changes in press ownership. Unsurprisingly, all newspapers and some local radio stations had already been privatized by 1990.  A significant number of new privately owned profit-oriented radio and television stations also came to exist, although the case of privatization is quite different for broadcasting since it involves another set of regulations.”

The selection above is based on a segment of Angelika W. Wyka‘s  dissertation research entitled, “The Role of the Media in the Process of Transition/Transformation in Poland, Hungary and the Czech Republic,” and is a review of the history of media privatization in three carefully selected Central European countries. It can be found in Media Landscapes in Transition: Changes in Media Systems, Popular Culture and Rhetoric of Post-Communist Era, a collection published by the Slovene Communication Association, edited by Andrej Skerlep, Dejan Jontes, Ilija Tomanic Trivundza and Maja Turnsek Hancic.

Kate Nacy is the first EJO Fellow to participate the European Journalism Fellowship program at the Freie Universität Berlin. Kate Nacy works as a journalist, writer and editor. Her work has appeared in news publications as well as in literary and arts journals. She served as the European Journalism Observatory’s English Web Editor from 2008 – 2012.
» Ethics and Quality, Media Economics » Transitional Media, East Central Europe