The “Murdoch of Kabul” and the Cultural Revolution in Afghanistan 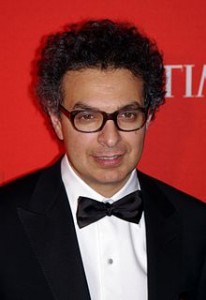 After twenty years spent in exile with his family in Australia, Saad Mohseni, son of an Afghan diplomat, returned to Afghanistan as the Taliban regime collapsed in 2002.

He is now defined by the international media as “The Murdoch of Kabul,” attaining a position among the 100 most influential people in the world, as dictated by Time magazine. Mohseni is the head of a vertically integrated media empire which includes TV channels, a record company, an advertising agency, a television and cinema studio, Afghan Scene magazine and an Internet point network, giving jobs to seven hundred people in Afghanistan and forty in Dubai. Moby Group is the name of the company he founded together with his brothers and sisters. From its offices in the Wazir Akbar Khan district in Kabul, the corporation controls the country’s major media and contributes to the Afghanistan’s  reconstruction in terms of infrastructures and social conditions: the two largest networks in Afghanistan, Tolo TV and Arman FM, with 54% and 37% of shares, respectively, owned by Moby Group.

Mohseni’s Moby Group broadcasts are changing Afghan society, helping the country to overtake the Taliban era once and for all by presenting new social models. Moby Group recently  announced, via Mohseni’s Twitter profile and a trailer on YouTube, the release of The Minister, a TV series inspired by The Office, a popular satirical BBC series also broadcast in the USA with big success. Shot as a mockumentary with fake interviews set in the offices of the Garbage Ministry of a fictional country dubbed Hechland, The Minister features no shortage of stereotypes pertaining to Afghan politics and institutions, sharply satirizing the corruption and sexism of the Afghan public sphere in the post-war period.

Under the Taliban regime, television was formally banned and the only operating radio program, “Voice of Sharia”, directly controlled by the government, broadcast only prayers and invitations to religious ceremonies. To the contrary, Tolo TV introduces previously unseen content, shaping a completely different society. Mohseni’s company broadcasts Bollywood soap operas where women appear without headscarves, home-produced series  like The Secrets of This House along with other  successful formats like the talent show Afghan Star or the music program Hop, all of  which provide Afghan society with new, more democratic models.

A report by Elizabeth Rubin published last year in New York Times Magazine, addresses the ways in which the media actively contribute to the process of “cultural revolution” (so defined by Mohseni himself during a conversation with Prime Minister Karzai). Rubin goes on to detail the ways in which the media facilitate a particular type of emancipation within the boundaries of Afghan culture, stimulating workplaces and contributing to a general improvement of the female condition.

Despite the democratization process taking place within the Afghan institutions, Moby Group’s networks still had to cope with attempts of censorship made by the government on several occasions. In April of 2008 the Ulema Council, which speaks about matters of Islamic orthodoxy, asked (with the support of the Minister for Information and Culture and the majority of the Parliament), Tolo TV and its 15 private competitors to stop transmitting Bollywood soap operas, accusing them of being “anti-Islamic” and not in accordance with Afghan traditions. Tolo TV refused to block the transmission and Karzai accused Mohseni of not understanding the Afghan culture and traditions. The Murdoch of Kabul simply answered, “Isn’t it time we change?”

Philip Di Salvo is a post-doctoral researcher based at the Institute of Media and Journalism of the Università della Svizzera italiana (USI) in Lugano. His main areas of research are whistleblowing, investigative journalism, internet surveillance and the relationship between journalism and hacking. At USI, he also teaches journalism at both the bachelor's and master's levels. Philip received his PhD in Communication Sciences from USI in 2018 with a dissertation on encrypted whistleblowing platforms in journalism. He is also a lecturer at Milan's Nuova Accademia di Belle Arti (NABA). As a freelance journalist, he writes about the social impact of technology for Wired, Motherboard/Vice, Esquire and other publications. Philip obtained a master's degree in Media Management from USI in 2012 and a bachelor's degree in Literature from Milan's Università degli Studi in 2010. He is the Italian editor of the European Journalism Observatory, based at the USI in Lugano.
» Ethics and Quality » The “Murdoch of Kabul” and the...