The Maghreb Revolution and the Shallowness of the Press 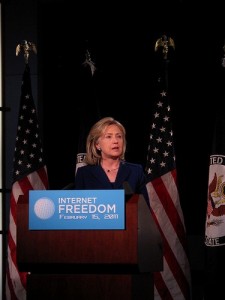 We all grew excited viewing images from Cairo and Tunis.

And as we listened to the reports from correspondents in Egypt and Tunisia, the world became convinced that the revolutions were unstoppable and, above all, spontaneous.  A “frame” of  truth was established that everyone embraced, without ever asking if it was reliable.  But if you analyze the situation from a different perspective, taking into consideration both the sophisticated communication techniques and the international political context, another truth emerges  –  one that is more credible.

At the end of the 1990s the American government decided to adopt, and above all, to apply the theories of Gene Sharp, a Harvard professor who theorized for years about the use of nonviolent struggle as an instrument to overthrow dictatorships. At this time the American government decided to test the effectiveness of his theories,  incorporating an element that Sharp himself had not contemplated: organization and support for nonviolent struggle from the outside. Thus, a new strategy was born and implemented on the world stage.

The first test was conducted in Belgrade, in October 2000, when the brave protest of Serbian students forced Milosevic to resign.  That movement was inspired by Sharp himself, but was organized and financed by non-governmental organizations, private corporations and philanthropic bodies, which – though they were independent – acted in agreement with Washington.  It was a success that was followed by the pink revolution of Tbilisi and the orange revolution of Kiev. On all three occasions the media desribed extraordinary, spontaneous insurgency.  No one was aware of what had taken place behind the scenes, which is that they were encouraged and guided from the outside, a fact now well-known to experts in communication.

After 2005 the “Sharp” formula was put aside, and resuscitated only now in this impetuous 2011, as is apparent from many coinciding implications.  The Daily Telegraph, for example, discovered – and it has not been denied – that the Egyptian opposition figures of the April 6th movement, extolled today as the brave anti-Mubarak leaders that emerged from blogs and social networks, participated in the fall of 2008 in a meeting at the State Department in Washington during which they discussed a democratic revolution that should erupt precisely in 2011.  The New York Times published a document that shows how Obama, more than 6 months ago, asked his experts to come up with proposals for ways to induce change in authoritarian political regimes in the Islamic world by taking advantage of mass discontent. Sharp himself admitted in an interview that he inspired the events in Egypt and Tunisia.  Add to that the role of the American NGOs in Tunisia and Egypt, the decisive support of the armies of these two countries, the allocation by Hillary Clinton of sizeable new funds for the spread of democracy via the Internet in authoritarian countries, and you have a more inclusive picture.

Washington, for obvious opportunistic reasons, cannot admit to more than it has so far.  It should be up to the mainstream press to explain what really happened from Tunis to Cairo, by piecing seemingly disconnected bits of information and statements together.  But once again the press appears to be overly dependent on official sources, too superficial to understand the subtlety of the spin, too frenetic in its chase for the latest news.  The media may pick up a detail here or there, but fail to paint the whole picture.  It does not reflect or probe deeper.  And again,  it fails.

Marcello Foa is the CEO of Swiss publishing group Timedia, Journalist. He is also the Co-Director of EJO and responsible of the Italian website.
» Ethics and Quality, Specialist Journalism » The Maghreb Revolution and the Shallowness...