In an introductory post Peter Laufer,  the James Wallace Chair in Journalism at the School of Journalism and Communication and an experienced journalist, encourages us to take more time and care over the news we consume, a message the European Journalism Observatory fully supports.

Yesterday’s newspaper sits mostly unread where I left it in favor of a heated debate with a friend about an obscure point of Oregon history. I’ll probably get back to the paper by tomorrow. There are articles in it I want to read, but I’m in no hurry. Those stories can wait. And I did glance through the news section to make sure I wasn’t missing something I felt I needed to know immediately.

I’m practicing what I call “Slow News,” named, obviously, after the Slow Food movement. I’m working hard to get off the 24-hour news merry-go-round because — despite the fact that I am a journalist — I’m convinced most news can wait.

I’m no Luddite and I do not hide from the news — from what a glib colleague refers to as “the dismal details of the daily downer.” Two newspapers are delivered to my house. I read through them while I eat breakfast, simultaneously checking other sources on my laptop. On my short commute to campus, the car radio blasts newscasts, from Fox to NPR. But then I take a breather. CNN is not droning in my office. Neither my phone nor my computer is programmed to assault me with so-called news alerts. (Here’s a recent example of a “breaking news alert” from The New York Times that arrived via an urgent email to my wife: “N.H.L. and Players Union Reach Tentative Agreement.”) A couple of times during the day I may check with one news machine or another to make sure the world still is relatively intact, but hockey labor relations updates can wait until tomorrow’s sports page, thanks just the same. 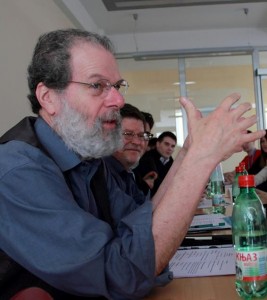 My Slow News movement is inspired by Michael Pollan’s “Food Rules,” a slim volume packed with sage advice, a compilation of wisdom from a journalist who specializes in what we eat and what it does to us. With chapter titles like “Avoid foods that are pretending to be something they are not” and “Don’t eat anything your great-grandmother wouldn’t recognize as food,” I realized as I was reading Pollan’s book that there is an integral relationship connecting food and news. We must eat in order to survive. Accurate information can be another requirement for our survival. Yet our quest for instant information has made it more difficult to find the truth and see the larger picture behind breaking events.

We need to decide for ourselves what so-called news is worth our while, not just allow ourselves to be subjected to an endless barrage of unfiltered media assaults. We’re in danger of missing the story because of the noise. A recent example is the massacre at Newtown. Unless we lived nearby in Connecticut or we knew the victims and their families, there was no need to subject ourselves to moment-by-moment updates about the tragedy, especially since the initial reports — as is so often the case with disaster reporting — were fraught with error. We need to ask ourselves what news is important and why. Quasi-hysterical news presentations — especially from broadcast and Internet-based outlets — can lead us to believe that the information being foisted on us is critical to know right now (and to hear and see repeatedly), even though it may warrant only a few lines in the back pages of tomorrow’s newspaper. When news is an important element of our societal curriculum, as in the case of the Newtown story, we should shun fragments and wait for detailed reports and thoughtful analysis once critical facts are ascertained.

So I invite you to my revolution against instant news and to join my Slow News movement. I want us to question the value of the perpetual fast-food-like empty-calories news that is processed to keep us addicted to it and instead consider that, for most news events, some time to ruminate is valuable for both the journalist in the field covering the story and the news consumer back home.

Peter’s piece was first published in the Oregonian on January 14, 2013.

Peter Laufer is an independent journalist, broadcaster and documentary filmmaker working in traditional and new media. He is the James Wallace Chair in Journalism at the University of Oregon School of Journalism and Communication.
» Ethics and Quality » The Slow News Manifesto