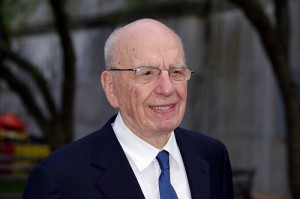 Will Rupert Murdoch withdraw from the United Kingdom and instead aggrandize his media empire in the U.S.?

Ken Doctor, an American media economist and columnist for the Nieman Lab at Harvard University has speculated about such a move. In London, Murdoch would leave nothing more than the scorched earth, while in the U.S. a unique opportunity has recently become evident. The Los Angeles Times and the Chicago Tribune, driven to ruin by Sam Zell, another impresario with criminal energies, are to be sold after insolvency. Hence, Murdoch may find a window through which he might find a way to relocate his media conglomerate to the new world.

This is a storybook scenario for Marxists who’ve been telling us for decades how shameless capital struts around in times of globalization. Ken Doctor, however, prefers to compare Murdoch with the mafia boss Corleone – and this is also, somehow, self-evident. Those who had the opportunity to listen to media researchers Tony Harcup (University of Sheffield) and Angela Philips (Goldsmiths College, London) at a recent Reuters Institute conference were inevitably left with goosebumps.

Both experts provided details about the bizarre universe of organized crime which characterized the News of the World and its competing yellow press outlets. The newsrooms suffered from a “poisonous climate” and “constant ritual humiliation.” No one dared to question the autocratic regime of the much too powerful editors in chief, which ultimately lead to a situation where ethics were “compromised at every level.”

Most improbable, too, that another media tycoon suspected of having close relationships to the mafia for many years might finally end up in prison. Even after condemnation Silvio Berlusconi will not have to flee, like his predecessor Bettino Craxi, to Africa. In the worst case he will remain under house arrest – which means he may be free to continue his “bunga bunga” parties in privacy.

European Journalism Observatory co-founder and until 2018 Professor of Journalism and Media Management at the Università della Svizzera Italiana in Lugano. Frequent contributor to Neue Zürcher Zeitung (NZZ) and Der Tagesspiegel (Berlin), as well as to the specialist publications Schweizer Journalist and Der österreichische Journalist.
» Ethics and Quality » Media Mafia