Let Us Tell Our Own Stories: Diversity In The Media 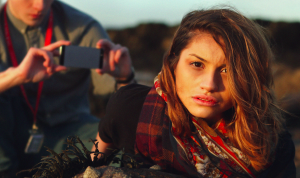 Over the last year, refugees struggling to reach European beaches have been newsworthy. They are often met by reporters and photographers who crowd around survivors, taking pictures and quotes. Yet the media interest is fleeting. After they leave the beaches the voices of refugees and migrants are rarely heard.

Migrants are among the minority groups largely invisible in the printed press, on air and online, according to a panel on media diversity at the recent International Journalism Festival in Perugia, Italy.  Other communities and groups whose stories rarely feature in the media are women, ethnic minorities, people with disabilities, those with mental health problems and LGTBs.

There is little diversity in newsrooms, the panel agreed. Nearly twenty years of initiatives by different European organisations (media, regulatory, inter-governmental and NGOs) to foster diversity and non-discrimination, have failed to significantly improve the situation. A recent longitudinal study of media in 140 countries found that in 2015 women made up less than a quarter (24%) of the people seen, heard or read about in broadcasts and newspapers – the same proportion as in 2010.

City University in London recently reported that the UK’s media industry is 94% white, [the UK’s ethnic minority population is around 15% ] and women media workers are underpaid and under-represented; a study at Coventry University found that migrants were referenced in only 15% of UK newspaper articles on migration.  In their February 2016 report (Victims and Villains: Migrant voices in the British media) the Centre for Trust, Peace and Social Relations further noted that nearly half of all articles framed migration as a threat, and migrants as “villains”, actual or potential. Only rarely, “migrants” (as well as women) are interviewed as experts of their profession – be it engineer, school teacher, architect or doctor.

This is a problem because the mainstream media’s choices of images and spokespeople greatly influence what the public perceive as relevant and who they see as entitled. Ideally, media professionals can depict an individual as much more than just a category – whether ‘disability’, ‘migration or ‘discrimination’ – and they can create a questioning base for social change.

Yet embracing diversity is a way of connecting with wider audiences, the panel on Diversity and Transcultural Competences agreed. Balanced, fair and non-discriminatory reporting is needed to help build inclusive societies. Journalism which spans cultural bridges by reaching out to the unfamiliar can be the basis of many creative opportunities but a fresh debate is needed into the role and accountability of media in today’s complex society, the panel said.

Speakers discussed whether intercultural competences could be a creative journalistic opportunity. They encouraged media professionals to treat diversity as a “lens” through which to read contemporary events.

Kate Coyer, a panellist and research director at the Central European University in Budapest, focused on access to the media. She pointed to independent output from community and alternative media – defined as the third media sector – as a way of involving and reaching diverse audiences. She said community media play a crucial, if unpaid, role in encouraging participation, promoting social inclusion, and training.

The right to have a voice

Larry Macaulay, founder and editor of Refugee Radio Network, an independent network for migrants and refugees mainly in Germany, spoke about the right to have a voice: who is entitled to speak and who decides what is relevant? He said when people are denied public participation they become more vulnerable to bigotry and marginalisation: “If we allow others to tell our story for us, we are doomed.”

Marina Lalovic from RAI Radio 3 in Italy referred to her own professional path from a “foreign” voice on Italian public service radio to covering a wide spectrum of cultural and political topics. At one time, she was an ambassador for MEDIANE, a programme set up jointly by the EU and the Council of Europe with the aim of including minority-specific perspectives without talking exclusively about minority-specific problems.

There is a perception that media is ‘done’ to people

Mukti Jain Campion, an independent producer for the BBC and founder of Culture Wise Productions, stressed the importance of tapping into the creative potential of diversity in all aspects of production: stories, location, contributors and so on. “Proceed with openness, curiosity, empathy – and humility; question your view of the world; seek out people whose voices are not commonly heard and listen to what they have to say.”   This way, little-heard perspectives can connect with wider audiences and avoid the perception that media is ‘done’ to people, rather than engaging with them.

As the Perugia panel’s moderator, I stressed the importance of being aware of one’s own cultural bias: education, background, experiences and networks. These can all influence the way journalists see and represent the world. A transcultural (seeing oneself in the other) approach allows us to recognise identity as something complex and multi-faceted, constantly evolving through interaction.  According to Professor Richard Slimbach, author of The Transcultural Journey, transculturalism aims to define shared interests and values across cultural and national borders, “thinking outside the box of one’s motherland.”

Journalism is itself about questioning, explaining, exploring ideas, enlightening and surprising.  The ability to encompass ‘the other’ needs to become part of basic journalistic thinking or be promoted through specific projects. Media professionals can endorse equality by recognising that diversity has many subtle shades and that complexity is the norm in today’s society. Nor is diversity ignored by the European media market. It has gained ground in TV fiction and entertainment, often as a commercial strategy to remain relevant and in touch with audiences. It has also been introduced in ethical and employment guidelines by public service broadcasters and regulators, based on the belief that more diversity in the staff (women, people with migration background, people with disabilities) contributes to a more inclusive media production.

But it’s not wholly a journalistic responsibility – all of society needs to be aware of its role in an interconnected world with its multiplicity of communication channels and accessible technology.  New, creative, initiatives are needed, but these must be grounded in a broader intercultural dialogue focusing on similarities and connections beyond nationality, gender, language, skin color or abilities.

Such awareness can help to stimulate fresh debate about the role of media in a changing society.