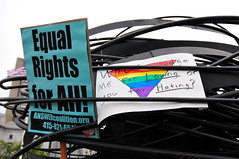 Are you for “family values” or “human equality”? Not that you actually have to choose one over the other, despite the prevalent belief that the two are mutually exclusive.  If you’re a Family Values reader, you might look to the Chicago Tribune for your latest in gay marriage info, whereas if you’re of the Human Equality variety, you’d better go for the New York Times. A new study published in the Social Science Journal takes a look at coverage of gay marriage in the New York Times and Chicago Tribune in 2003 and 2004, before and after the Massachusetts ruling that legalized gay marriage in the state.  After analyzing 120 news stories, detailing approach, tone and quoted sources, it was found that the Times emphasized equality, with 33 percent of sampled stories focused on equal rights, compared to 19 percent in the Tribune. The Tribune, traditionally a more conservative paper than the Times, pushed coverage toward American family values.  Religious attitudes were found to be incorporated more frequently in Tribune coverage (20 percent of stories) than Times coverage (12 percent).

For more on the moral worlds of liberals and conservatives, see Miller-McCune.

Kate Nacy is the first EJO Fellow to participate the European Journalism Fellowship program at the Freie Universität Berlin. Kate Nacy works as a journalist, writer and editor. Her work has appeared in news publications as well as in literary and arts journals. She served as the European Journalism Observatory’s English Web Editor from 2008 – 2012.
» Ethics and Quality, Media and Politics » Framing Gay Marriage