Leaders ‘Paranoid About Journalists’ As Respect For Press Freedom Declines 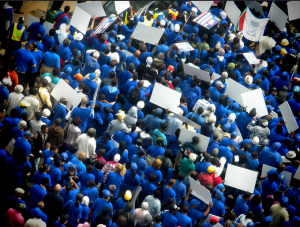 There has been a ‘deep and disturbing’ decline in respect for media freedom on every continent over the last three years, according to the latest edition of the World Press Freedom Index, published today by Reporters Without Borders.

In many countries, it reports, laws have been adopted penalising journalists for new ‘crimes’, such as “insulting the president”  or “supporting terrorism”. Self-censorship is increasing as a result.

Ever since the 2013 index, Reporters Without Borders has been calculating indicators of the overall level of media freedom violations in each of the world’s regions and worldwide. The higher the figure, the worse the situation. The global indicator has gone from 3719 points last year to 3857 points this year, a 3.71% deterioration. The decline since 2013 is 13.6%.

The many reasons for this decline in freedom of information include the increasingly authoritarian tendencies of governments in countries such as Turkey and Egypt, tighter government control of state-owned media, even in some European countries such as Poland, and security situations that have become more and more fraught, in Libya and Burundi, for example, or that are completely disastrous, as in Yemen.

The survival of independent news coverage is becoming increasingly precarious in both the state and privately-owned media because of the threat from ideologies, especially religious ideologies, that are hostile to media freedom, and from large-scale propaganda machines. Throughout the world, “oligarchs” are buying up media outlets and are exercising pressure that compounds the pressure already coming from governments.

The legislative framework has registered an equally marked decline. Many laws have been adopted penalising journalists on such spurious charges as “insulting the president,” “blasphemy” or “supporting terrorism.” Growing self-censorship is the knock-on effect of this alarming situation. The “media environment and self-censorship” indicator has fallen by more than 10% from 2013 to 2016.

Every continent has seen its score decline. The Americas have plunged 20.5%, above all as a result of the impact of physical attacks and murders targeting journalists in Mexico and Central America. Europe and the Balkans declined 6.5%, above all because of the growing influence of extremist movements and ultraconservative governments.

The Central Asia/Eastern Europe region’s already bad score deteriorated by 5% as a result of the increasingly glacial environment for media freedom and free speech in countries with authoritarian regimes.

Finland remains at the top of the index, with Eritrea (180th) at the bottom. Poland recorded the biggest fall of any European country, down 29 places to 47th, with Tunisia rising the most places (up 30 places to 96th in the index).