Voluntary internship at Reporters Without Borders in London

New Post: Editor for new TV channel to be launched next year in Scotland. Apply by 27 August.

City University’s Department of Journalism is regarded as a leader in its field.

The Journalism Diversity Fund, sponsored by (among others) Associated Newspapers, Guardian, PA, Sky, FT) offers Bursaries available to British students enrolled on a NCTJ-accredited course  and who come from “a socially or ethnically diverse background.”  Closing date: 15 November.

Index on Censorship is recruiting journalists

Index on Censorship is looking for European journalists to act as part-time correspondents based in Germany, Poland and Italy to monitor violations to press freedom for Mapping Media Freedom. They are accepting applications on a rolling basis.

A forthcoming Data Journalism Workshop in Bucharest offers free training for Romanian journalists. To be held on 15-16 September. Data Exploration for Storytellers is a free 2-day practical workshop. Working language of the workshop will be in English. Professional data and investigative journalists from The Times (UK), Rise Project (RO) and Textura (UA) will offer essential tools which can be applied by participants straight away in their work.

A six-month fellowship programme for journalists and media practitioners to support quality reporting on labour migration in the Middle East. The programme is open to individuals working in Bahrain, Jordan, Kuwait, Lebanon, and the UAE. 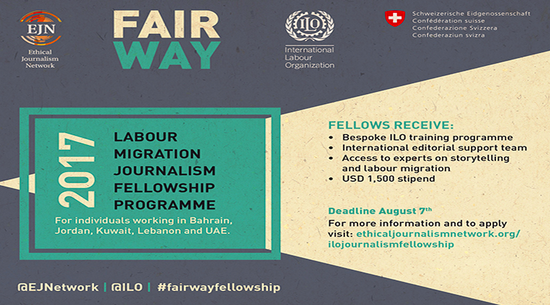 The third annual VR conference for Journalism & Documentary invites VR enthusiasts, journalists, interactive documentary makers, early technology adopters and other non-fiction storytellers to meet to share experiences, seek inspiration and head back home feeling virtual. The conference is self-organised and all costs are covered by ticket sales. The talks of the first conference in 2015 can be found here. The programme from last year can be found here.

Advance notice that the next International Journalism festival takes place in the Italian city of Perugia on 11 – 15 April 2018. The biggest annual media event in Europe has free entry.

Entries open on 1 August. Entries in a range of categories will be shortlisted in October for the Award ceremony in London in December. The Awards, for UK journalists, are sponsored by (among others) Reporters Without Borders.