Investigative Journalism In “One Of The World’s Most Dangerous Countries” 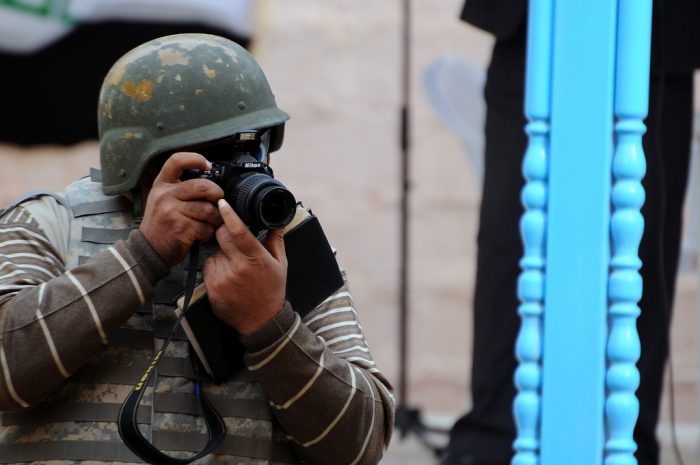 Photo-journalist in Iraq. Training and equipment are in short supply.

Newspapers in Iraq are commissioning investigative journalism in a bid to attract and retain audiences who might otherwise turn to local digital news platforms. But the cost of investigative projects, a lack of access to information and curbs on freedom of the press have hindered development of this specialism in Iraq.

A recent study, The Obstacles of Investigative Journalism in Iraq from the Point of View of Iraqi Journalists, has found that Iraq’s legacy media organisations currently fund occasional investigative projects, but have been deterred from investing more.

Dr Al-Hamdani’s research has highlighted the challenges faced by Iraq’s investigative reporters. These include the considerable risks of working in a country beset by religious and sectarian warfare. Journalists are often targeted by either pro-government militias or militant opposition groups and have little protection against threats. They also face legal obstacles and a lack of government transparency, the study found.

Iraq is currently ranked 158 of 180 countries in the World Press Freedom Index, published annually by Reporters Without Borders.


A lack of transparency of government sources was the problem cited by most (80%) respondents. The majority also reported a lack of financial resources to conduct investigative work, especially to buy electronic devices, such as recording tools. Indeed, only a fifth of journalists interviewed said they had equipment required to carry out their investigative work.

One of the most serious challenges to the development of investigative journalism identified by the study was how journalists, who usually receive low wages, could be protected from the temptations of corruption.

Although continuing education is considered an important part of a journalist’s career, few courses are offered in this complex journalistic genre. Only 12% of those interviewed confirmed they had done courses, conducted by international organisations.

Efforts have been made to make training available, and more is planned. In 2016 two universities in Baghdad opened MA courses in investigative journalism, and universities in Sulaymaniyah and Dohuk were helped by the Copenhagen-based International Media Support (IMS) organisation, which has been working in this area for six years.

These courses have already made an impact. According to Rebaz Mohammed, IMS Programme Coordinator based in Iraq, work by the NIRIJ has attracted press coverage and attention from government agencies, and one investigation (into the use of expired medications) has led to court proceedings and compensation for victims.

Among other topics investigated by Iraqi media have been the waste of public funds, lack of justice, failures of public officials and the principle of accountability. A recent NIRIJ investigation was entitled ISIS’s Real Estate Empire about the mysterious disappearance of thousands of property deeds in Mosul.

Although Dr Al-Hamdani’s research is limited to Iraqi journalism, other Arab countries face similar issues. The majority of Arab countries do not yet have laws that protect investigative journalists, such as a right of access to information or protection of source confidentiality.

The results of this research were presented at a conference, “Towards a vision for the future to build a responsible media”, organised last year by the Faculty of Information of the Iraqi University, Baghdad, in partnership with the NIRIJ.

Nouha Belaid holds a PhD in media and communication. Her thesis looked at television on social media in an era of media convergence. In 2017 she was named by UNESCO and the European Union as one of 100 Young Tunisian Experts. Her 2013 master’s thesis, devoted to political communication and social media, was awarded the Prize for Scientific Excellence. Nouha was a co-founder of the Arab Journalism Observatory (AJO) and currently edits the AJO website. She teaches online journalism at Tunisia’s Central University and is also the Academic Programme Manager of the university’s School of Communication. Since 2013, she has worked as a consultant and trainer with international institutions such as Internews, the United Nations Development Programme (UNDP), the Arab States Broadcasting Union (ASBU) and others.
» Research, Specialist Journalism » Investigative Journalism In “One Of The...