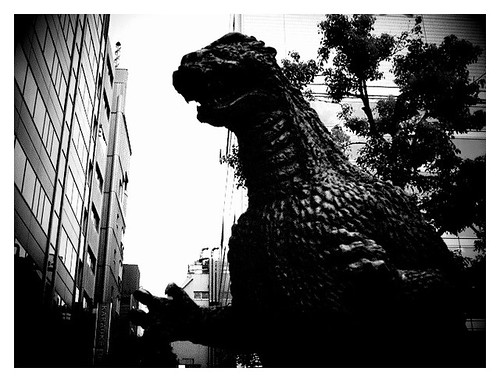 Well, there. It’s been said.

Perhaps not exactly in such precise terms, per se, but it’s been generally implied that there’s catastrophic U.S. federal debt out there, and that it’s massive, and that it will – ultimately – destroy us. Or help China destroy us. Or it will, at the very least, make a lot of moms and dads fight more and worry about new things they didn’t have to worry about before. Let’s suppose there are two prominent news narratives with regard to the current state of the U.S. economy: (a) blood-drooling, fire-breathing Godzilla Debt or (b) Moms and dads sleeping less and clipping coupons more. American news can be kind of polarized.

What’s become clear is that economic news in the U.S. bums people out. Big time. According to the Pew Research Center for the People & the Press, negative views of economic news have risen sharply since last month, now resting at their highest level in more than two years. Perhaps no news is, in fact, less-depressing news.

Just for fun, let’s take a quick gander at a few recent headlines dealing with the U.S. economy:

“Will Bank of America Doom the Economy?” (Salon)

“The Next Horrible Budget Showdown” (Salon)

“When Dollar Stores Are Too Expensive” (Slate)

“Be Afraid: Why the Markets Are Tanking” (Slate)

Granted, there are a number of more optimistic sources for keeping up with current events (try TV Guide, Sports Illustrated for Kids…). But according to findings based on the most recent installment of the weekly News Interest Index, an ongoing Pew project, 67% of those surveyed say they are hearing “mostly bad” news about the economy, up 18 points in the last month alone and more than 40 points since the start of 2011.

The index, based on longstanding research into public attentiveness to major news stories, examines news interest as it relates to the news media’s coverage. Results for this survey were based on telephone interviews conducted among a national sample of 1,001 adults 18 years of age or older living in the continental United States.

Views on news about individual economic sectors – from the financial markets to jobs to real estate – are “increasingly downbeat”.

When it comes to employment, responses pertaining to the job situation in the U.S. are the lowest they’ve been since Pew first started tracking them in June of 2009.

And among those expressing negative sentiments about economic news you’ll find majorities in nearly every demographic group: More than six-in-ten Republicans (71%), Democrats (62%) and independents (69%) say that the news they are hearing about the economy is mostly bad.

The vast weight of the federal debt can be (lightly) understood as follows: The recession forced revenue to plunge, and tax rates have been very low for a long time. Then there are the (more than two) wars. Expensive ones.

And yet the world still turns, and things still continue to happen (even outside America!). Other such issues garnering attention include the Federal Aviation Administration’s partial shutdown, violence following political uprisings in Syria, the candidates for the 2012 presidential elections, and the food shortage in Somalia, although these accounted for significantly smaller portions of the newshole.

Unremitting economic storylines may be topping public interest, however given the recent market plunge, this is not terribly unusual. Revoking pessimism is certainly an unrealistic order, but it’s worth noting that despite the national anxiety, preoccupation with uncertainty, deepened feelings of bewilderment, resentment – equally magnificent events continue to occur each week, unsettling entire populations. They are simply happening in other places.

Kate Nacy is the first EJO Fellow to participate the European Journalism Fellowship program at the Freie Universität Berlin. Kate Nacy works as a journalist, writer and editor. Her work has appeared in news publications as well as in literary and arts journals. She served as the European Journalism Observatory’s English Web Editor from 2008 – 2012.
» Ethics and Quality, Specialist Journalism » Economic Chaos! Cataclysm!