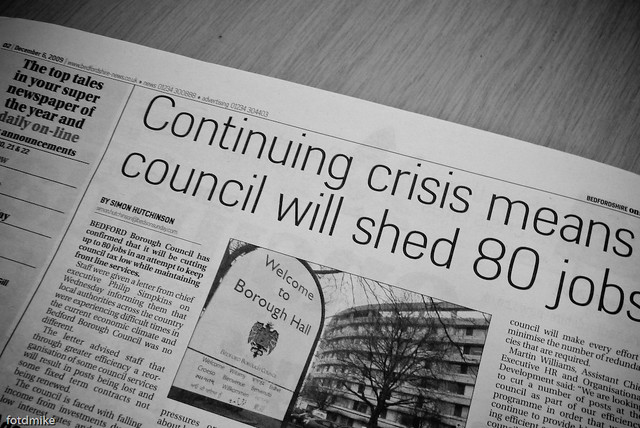 A new study from the University of Mainz shows that media coverage of banks is pro-cyclical.

This means media outlets dramatize their business coverage in good and bad times – thus strengthening the market’s tune and business fluctuation. In late November 2006, Frankfurter Allgemeine Zeitung published an article about the economic prospects of Deutsche Bank, stressing positive numbers and forecasts, for example an expected return on equity of 27 percent. The bank’s CEO Josef Ackermann had “delivered,” according to the article, although an expensive legal trial was also mentioned in the text. Just four years later, when new and very positive numbers were presented by the bank, Manager Magazin was much more subdued, merely describing the uptake as “solid.”

A new study by Myriam Vosseberg from the University of Mainz, “Paradigm Shift in Business Reporting?,” compares reporting in the business press and the economic departments of several newspapers, both before and during the financial crisis.

According to Vosseberg’s study, the economic departments of quality newspapers spent more time in 2010 addressing risks, special investment opportunities, and business decisions than in the previous three years.  In addition, reporting on pure numbers and statistics – especially return on equity – dropped significantly.  According to the study, 52 percent of articles included in Vosseberg’s research were at least predominantly about business results, while three years later this number was reduced to 37 percent.

Furthermore, the assessment of banks deteriorated in newspaper coverage. Before the crisis, banks were assessed negatively in 25 percent of articles – after the crisis negative assessments were found in 55 percent of articles, but according to Vosseberg, “there wasn’t much reporting on high bonuses for bankers.”  She suspects that discussion on this topic was included in other areas of the newspaper, especially in news or political sections, which were not included in her study.

Vosseberg’s research used content published during the first five months of the year in the business sections of Süddeutsche Zeitung and Frankfurter Allgemeine Zeitung, in addition to the business newspapers Handelsblatt and Börsenzeitung, from 2007-2010. All articles were part of a content analysis which focused on balance sheets, press conferences, and quarterly reports, or on future risks – while at the same time featuring one of four banks (Commerzbank, Deutsche Bank, Helaba and Landesbank Baden-Württemberg).

For Stefan Geiss, Vosseberg’s thesis supervisor at the Mainz Institute of Journalism (Institut für Publizistik), this is a good example of a phenomenon he calls “know-it-all-journalism.” Many journalists are habitually less critical during positive market periods, and very critical and negative during bad periods. “Before the economic crisis, especially the collapse of investment bank Lehman Brothers, the risks were almost entirely excluded from reports, and banks were criticized for being too cautious. After the crisis, the focus has shifted to risk,” says Geiss.

Based on Vosseberg’s numbers, Geiss described the pro-cyclical reporting of financial journalists as “at least questionable,” because their reporting regularly exacerbates bubbles as well as crises. Geiss therefore hopes that in the future, economic reporting mechanisms are discussed more frequently, “that would actually be a task of the media pages,” says Geiss. But he has little hope – there have been economic crises before, and journalists didn’t learn anything from them either.