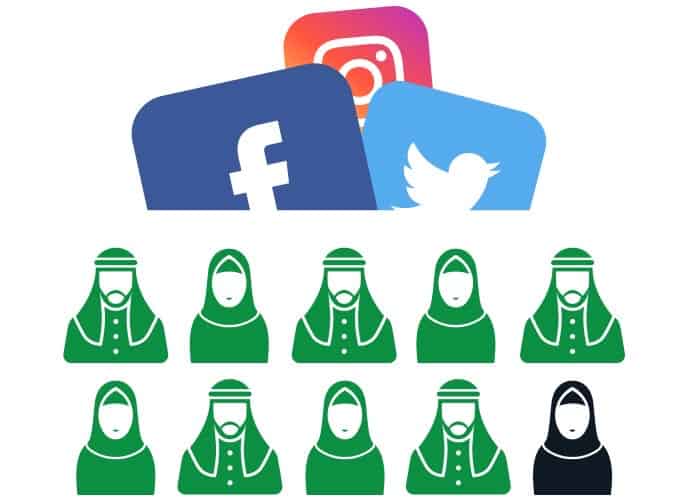 Nine out of 10 young Arabs use at least one social media channel every day. (From infographic by GO-Gulf)

The social media landscape in the Middle East looks very different now from what it did earlier in the decade, presenting challenges for journalists, brands and researchers alike.

During the Arab Spring, Facebook and Twitter were seen as important players in amplifying criticism of existing leaders, serving as platforms for the organisation of protests and enabling activists to share their demands for change with the outside world. But this is no longer the case. These older services have been superseded by newer, more visually orientated platforms such as Instagram and Snapchat.

Alongside this, many of the conversations that once played out on open networks – such as Facebook and Twitter – have migrated to closed, encrypted, networks such as WhatsApp, Viber and Telegram.

Here’s how these developments have fed into some of the wider trend lines observed in 2019:

Across the region, Twitter usage among Arab nationals has fallen by half since 2013, from 45% in 2013 to 22% in 2018, data from Northwestern University in Qatar finds.

Nonetheless, Twitter remains popular in Saudi Arabia (KSA) and Turkey. These are the fifth and sixth largest markets for Twitter in the world, with over 10 million active users in KSA, akin to 38% of the population, and 8.3 million in Turkey (13%).

There are similarly mixed messages for Facebook. In the region as a whole, the network has seen a decline in usage over the past decade, though it still manages to reach 187 million active monthly users. How is that possible? In a word: Egypt.

Use of Instagram has grown from 6% of Arab nationals in 2013 to 42% at the end of 2019. There are currently more than 63 million Instagram users in the Middle East.

Turkey is the sixth largest market for Instagram worldwide, with 37 million members and 56% penetration. Take-up is also notably high in other MENA nations such as Kuwait (6th at 54% penetration), Bahrain (10th at 50%) and Israel (15th at 48%).

Snapchat’s reach is not as substantial, but the network is very popular in KSA, where it is used by over 90% of all 13-34-year olds.

The ephemeral messaging network added 18 new shows, and 9 new seasons of existing programs, to Snapchat Discover in the region last year, as well as a new premium advertising product featuring six-second unskippable ads that run across Snapchat Shows in KSA and UAE.

And although overall use of Twitter has declined, research conducted by the consumer insights company Toluna found that up to 72% of Twitter users in KSA and UAE and 62% of users in Egypt consider the platform to be a leading source for online video.

In response to this trend, Twitter unveiled over 16 premium video content collaborations across sports, entertainment and news. Partners include major broadcasters such as the MBC Group and the Saudi football clubs Al Ahli and Al Ittihad.

New and live original productions for Ramadan were also announced, including “Your Ramadan Morning with Sayidaty”, an all-female morning show by and about women, and “Who’s Turn is it?”, a live programme showcasing stand-up comedians.

Trend 3: The rise of digital parenting

Another visual medium, YouTube, is also expanding its influence and impact.

Parents in MENA increasingly use YouTube as a means to bond and share experiences with their children and reminisce about their childhood, as well as relying on the channel “to act as a third parent or advisor who offers support.” Interestingly, Dads run the top 3 parenting channels in MENA, Google has established.

Some parents are also becoming YouTube influencers. Saudi vlogger Muhammad Moshaya hit 8 billion views of his YouTube channel in late 2019, according to data from Socialbakers.

The family-oriented YouTuber – whose videos depict his life with his children and his travels around the world – now has 14.6 million subscribers.

The next most popular channel, Super Somaa, which features a Super Kid who helps solve the problems of all humans – and his friends in particular – has 2.1 million subscribers and just under 9 million views.

What these trends show is that social media use in the Middle East continues to change rapidly, as the popularity of individual networks ebbs and flows and functionality evolves.

Networks such as Twitter are managing to reposition themselves, while other channels such as YouTube are beginning to impact users in new – and perhaps unexpected – ways.

As we enter a new digital decade, it will be fascinating to see which trends continue and what form the next wave of disruptive social media takes.

Image: Detail from an infographic created by GO-Gulf based on the University of Oregon report “Social Media in the Middle East: 2019 in review”. Reproduced with permission.

If you liked this story, you may also be interested in Middle East: Digital Divides Narrowing, Privacy Concerns Increasing.

Damian Radcliffe is the Carolyn S. Chambers Professor in Journalism, and a Professor of Practice, at the University of Oregon. He is also an affiliate of the Department for Middle East and North African Studies at the University of Oregon, a Fellow of the Tow Center for Digital Journalism at Columbia University, an Honorary Research Fellow at Cardiff University’s School of Journalism, Media and Culture Studies, and a fellow of the Royal Society for the Encouragement of Arts, Manufactures and Commerce (RSA). He has produced an annual report charting social media developments across the Middle East and North Africa (MENA) since 2012. He tweets @damianradcliffe. | Hadil Abuhmaid is a Media Studies PhD student and a Graduate Employee at the University of Oregon. Her primary area of research interest explores national identity and culture in Palestinian cinema. Hadil earned a BS in Journalism and Political Science from Bir-Zeit University in Palestine and an MA in Nonprofit Management from the University of Oregon, with a focus on Arts Administration. She is the co-founder of Filmlab: Palestine, a nonprofit based in Ramallah, which aims to develop the cinema industry in Palestine. She tweets @AbuhmaidHadil.
» Recent, Technology » Social media in the Middle East:...