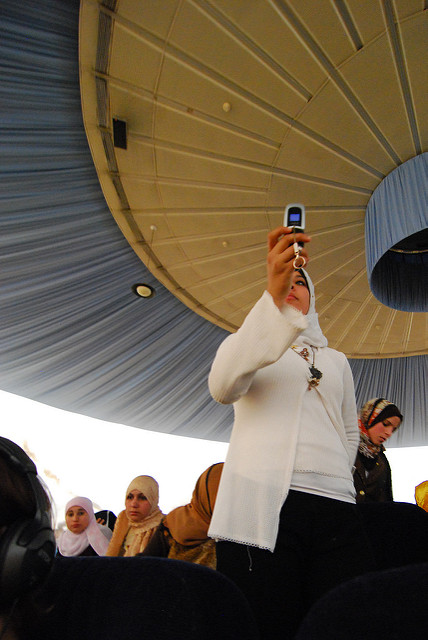 Smart phones in Egypt, where internet penetration has dramatically increased over the past three years.

Internet use is growing across the Middle East as people gradually abandon traditional listening and viewing practices, according to new research. The 2016 Media Use in the Middle East study found that digital divides are narrowing, not only between Gulf countries and their regional neighbours, but also between generations and social classes within countries.

Researchers interviewed 6000 people in six countries: Egypt, Lebanon, Tunisia, Saudi Arabia, Qatar and United Arab Emirates. Focussing on different aspects of media use, including cultural attitudes, censorship and social media, they found that internet penetration has risen in all six countries over the last three years, but particularly in Egypt and Lebanon. Internet use in Tunisia is the lowest among countries surveyed. Nearly all nationals in Arab Gulf countries use the internet.

The study also found that users of all media have become more open to other cultures through the availability of a broader range of international films and television programmes. More than one third (36%) of those surveyed included a foreign language channel in their list of channels they regularly watch.

The study, conducted by the Northwestern University in Qatar, in partnership with the Doha film Institute, is part of a longitudinal, comparative project, conducted annually by the University. It concluded that increased access to other cultures  – either through international terrestrial or digital platforms – has not led audiences to reject their own national or regional media. On the contrary, the study reports: “We see some evidence of increased use of media specific to one’s own identity alongside the expanding availability of international content.”

Arabic is the preferred online language in the region and the number of people accessing the internet in English is falling, the report notes.

Audiences want more content specific to their own culture and history, ranging from 52% in Tunisians to 80% of Qataris, researchers found. Most consume entertainment media in the Arabic language. The use of English is much lower, and declining. Consumption of film, TV and music from the US has decreased since 2014.

Most Egyptians and Qataris said it was the government’s responsibility to block ‘objectionable’ content from the Internet. However, Lebanese, Tunisians and Emiratis said individuals should have the right to choose what to watch.

Support for free speech increased in Tunisia and Egypt from the previous year but declined slightly in Saudi Arabia. Most (54%) nationals interviewed across all countries said they believed in freedom to express their ideas online, even if their views are unpopular.

Facebook and WhatsApp are the dominant social media platforms in the region although there is some national variation (for example only 3% of Tunisians use WhatsApp). Instagram is becoming increasingly popular everywhere.

Nouha Belaid holds a PhD in media and communication. Her thesis looked at television on social media in an era of media convergence. In 2017 she was named by UNESCO and the European Union as one of 100 Young Tunisian Experts. Her 2013 master’s thesis, devoted to political communication and social media, was awarded the Prize for Scientific Excellence. Nouha was a co-founder of the Arab Journalism Observatory (AJO) and currently edits the AJO website. She teaches online journalism at Tunisia’s Central University and is also the Academic Programme Manager of the university’s School of Communication. Since 2013, she has worked as a consultant and trainer with international institutions such as Internews, the United Nations Development Programme (UNDP), the Arab States Broadcasting Union (ASBU) and others.
» Digital News, Press Freedom, Recent » Middle East: Digital Divides Narrowing, Privacy...