Unconventional, Irreverent Independent Newspaper To Go ‘Off Stone’ And Online 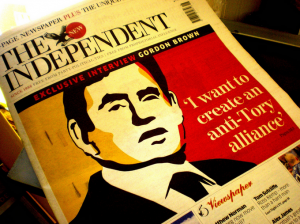 It seemed rather threatening at the time. It was my first day as the  executive editor in charge of news at the Independent, and it seemed right to mingle with the reporters in the office pub over the road after work. It was the chief reporter who took me by the elbow into one of the dark recesses. “Look – you may have come here with your  fancy Sunday Times ways [I had been head of news there] but I want you to know that this paper is like no other. It is the product of a group of friends, and we’ll defend it to the death.”

Looking back this week, 30 years after the launch and with the announcement that the print editions of  the Independent and the Independent on Sunday are to close at the end of March, I see even more clearly how important it was to heed these words and how they were the key to understanding the psychology of this most idiosyncratic of newspapers – where I went on to spend 13 of the most rewarding years of my journalistic life.

I had joined in 1994 at a difficult time for the Indy. By then, the original vision of Andreas Whittam Smith to create a truly independent quality newspaper was running out of steam and, more importantly, money.

The reins were now held by a consortium of the La Stampa and El Pais newspapers from Italy and Spain, the UK Mirror Group, and Tony O’Reilly’s Independent Newspapers. They had chosen the cerebral Ian Hargreaves from the Financial Times to replace Whittam-Smith as editor, who had appointed me as his lieutenant.

But within months, Hargreaves, who proved too independent-minded for the board, was out the door and the paper went through a series of editors, ownerships and vicissitudes, each accompanied by a downward notch in circulation and fortunes, ultimately leading to this week’s final demise. A circulation of more than 400,000 had collapsed to less than 30,000. 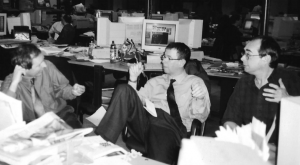 During my years with the paper, which included eight as deputy editor of the Independent on Sunday, I served under a total of eight different editors, some of whom would not have disgraced the pages of an Evelyn Waugh or Michael Frayn novel, including the idiosyncratic Janet Street Porter, Rosie Boycott with her passion for legalising cannabis, and Andrew Marr, who later admitted he wasn’t much good at the job.

Yet all this time the paper continued to be brilliant, with outstanding use of pictures, award-winning magazines, some of the best foreign coverage in the world, while mostly maintaining its non-partisan political status. Under editor Simon Kelner it had become the first quality tabloid, and the first “viewspaper”, where comment took priority over news. It launched its mini-offshoot, the i, which has survived the cull and netted £25m in sale proceeds.

Can the Independent’s originality survive its transition to digital-only?

The key to the Independent’s editorial versatility was because its outlook on journalism remained unconventional – but in the best possible way. It’s first obituaries editor was not a journalist but an antiquarian bookseller; it appointed James Fenton, a poet, as a far east correspondent. Its editorial leadership was a world away from that of the Fleet Street “good ol’ boys”, where the editor of the Daily Telegraph can slip seamlessly into the editor’s chair at The Sun after being deputy at the Mail. The Indy was always of itself – its loyal “friends” mostly saw to that.

Even in its later years when it was wholly owned by O’Reilly’s global Independent Newspapers or by the Lebedevs, father and son oligarchs, the paper still felt fresh and original. It’s big failing was elsewhere: it was weakest of the pack in a market where quality journalism was ever more expensive and revenues ever diminishing.

Right to the end, the paper has stayed as irreverent, innovative, contradictory, quirky and nimble of foot as the day it opened. The current and last editor of the Independent Amol Rajan (also, many say, one of the best) says that the website that is to replace it will be just as good, investing in “high quality content”. But will we be passionate about it, as those loyal Indy reporters were in the old days were?

We may hope so. There has always been a lot of schmaltz and mythmaking about newspapers, which now seems to intensify the closer they get to their untimate demise. Yet it is true that the physical world of print is full of passion in a way that the cold hyperlinked universe of a website or a wiki rarely proves to be. Rajan hints at this in his letter to “treasured print readers” announcing the closure, talking of the “rustle and whiff” of paper and the “thud on the doormat”.

The office of the  Independent print titles, packed with their committed staff, has always been such a place where passions poured out, rivals jostled, intense debates took place, where page proofs containing great scoops were held proudly aloft, where mere type was elevated into designs that sang out brilliantly on the news stands next morning on some of the most original front pages of modern times.

And creative tension crackled between editors, reporters, leader writers and anyone else who felt qualified to join in. In an online bulletin board this week, staff posted favourite memories of their days on the Indy. A former City Editor cited a vocal argument between a news editor and myself, peppered with saltiest of language, at the end of which he nearly thumped me. Now I can be certain it must have been an especially good edition of the newspaper the next morning!

Will this creative cacophony fall silent when the final editon of the last newspaper on March 26 goes “off stone” (a phrase, incidentally, with a provenance going back to the days of Caxton)? Let’s hope enough of that band of “friends”, who nobbled me on my first day, retain their positions to ensure it doesn’t.

Michael Williams was executive editor of ‘The Independent’ (1994-1999), deputy editor of the ‘Independent on Sunday’ (1999-2007) and readers’ editor of both papers. His book The Future of Quality News Journalism (With Peter Anderson and George Ogola) is published by Routledge

Michael Williams was executive editor of ‘The Independent’ (1994-1999), deputy editor of the ‘Independent on Sunday’ (1999-2007) and readers’ editor of both papers. His book ‘The Future of Quality News Journalism’ (With Peter Anderson and George Ogola) is published by Routledge
» Media Economics, Recent » Unconventional, Irreverent Independent Newspaper To Go...