Who Gets Good News? Apparently Not The Poor… 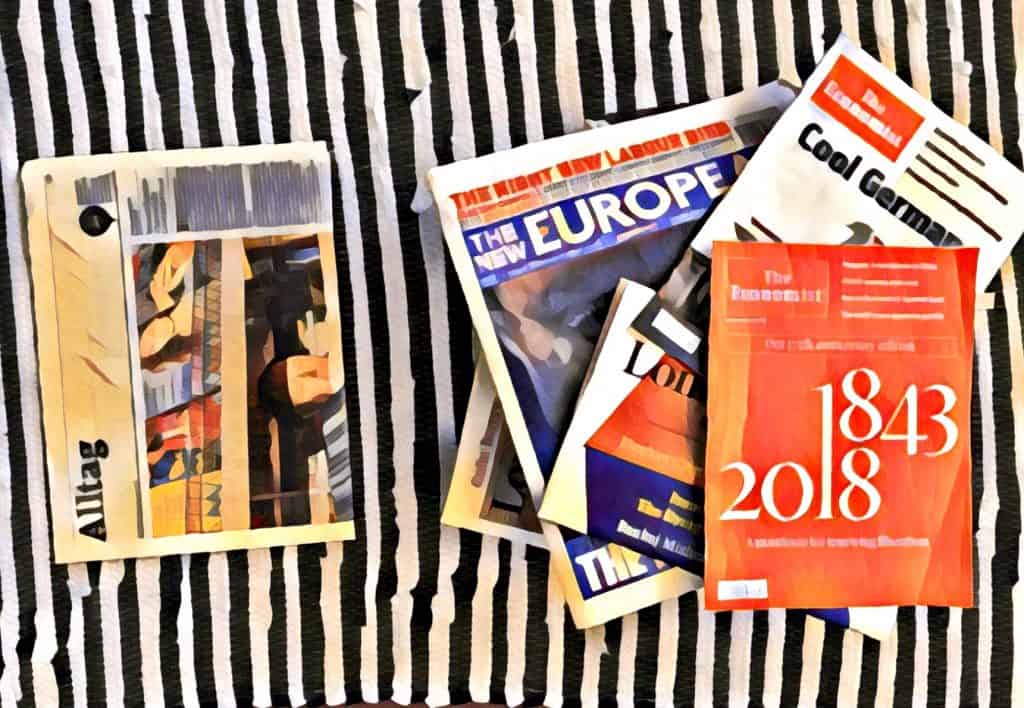 Inequality is a favourite topic among many these days. Economists, political scientists, even the IMF – all point to inequality as an important factor for the current state of affairs in many countries. But while pundits usually talk about income inequality, fewer people look at a no less important form: news inequality.

And at least for the UK, a new study by Reuters Institute for the Study of Journalism has now found that news is even more unevenly distributed than income. According to the authors, Antonis Kalogeropoulos and Rasmus Kleis Nielsen, poorer people consume significantly less news than wealthier people. The difference between the two groups is particularly strong online, where poorer people are less likely to go directly to a source of news. The only similarity, it seems, is that both poorer and wealthier peoples are equally reliant on news ‘intermediaries’, such as social media and search engines. 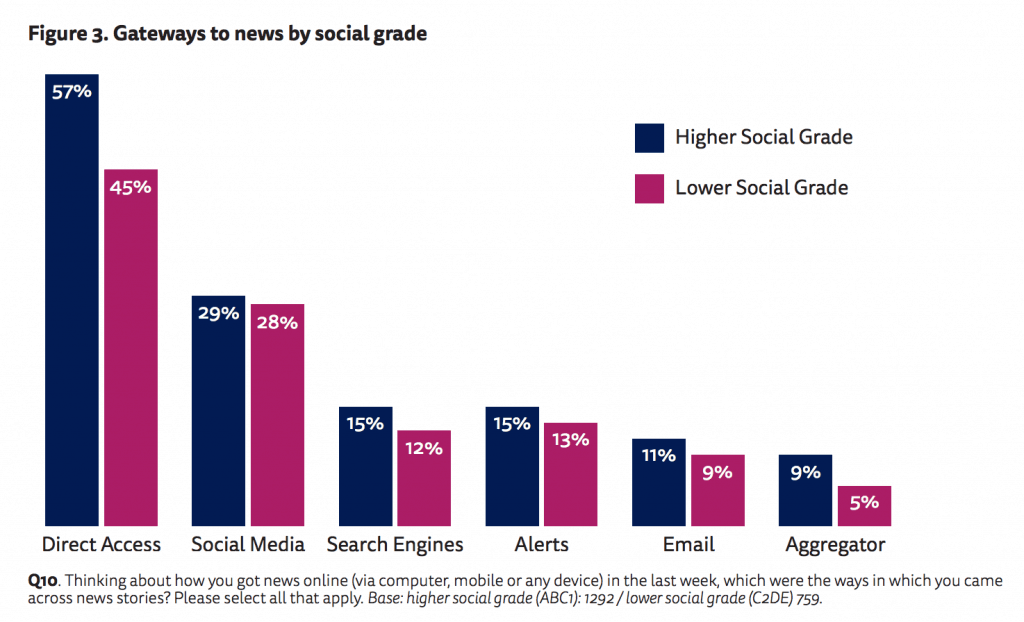 The study, ‘Social Inequalities in News Consumption’, measured the number of news sources – both online and offline – used by individuals in the UK, according to their social grade. Despite some offline news sources, such as the Sun, the Mirror and ITV News, having higher usage among those in lower social grades, there are no online sources which have significantly more users from poorer backgrounds.

The study also finds that news consumption, particularly online, is more unequally distributed in the UK than income is – measured on the basis of the number of news sources used on a weekly basis. The Gini coefficient (a statistical measure of distribution developed by the Italian statistician Corrado Gini. It is often used as a gauge of inequality), for news consumption inequality measured 0.42 for offline news sources (on a scale of 0 to 1, with 1 being maximum inequality) and 0.55 for online sources. For comparison, the GINI coefficient for income inequality in the UK is 0.36.

Methodology: According to the study, data was taken from the Reuters Institute’s 2018 Digital News Report survey in the United Kingdom. Research was conducted by YouGov at the end of January/beginning of February 2018. The researchers looked at questions in the use of 28 offline and 32 online news sources. For social grade, the survey respondents are classified based on the Market Research Society scale from grades A to E, based on occupation. ‘A’ classification is “Higher managerial, administrative and professional” and ‘E’ classification denotes “State pensioners, casual and lowest grade workers, unemployed with state benefits only”. For the purposes of the study, those in ‘higher social grades’ are those with a classification of ABC1; those in ‘lower social grades’ have a classification of C2DE.

The study further finds that around a quarter of the UK population do not access news online, with a comparable proportion accessing just one online news source. Of the offline news sources studied, The Times, the Guardian and BBC Radio news are more popular with those in from wealthier background whereas the tabloids such as the Daily Mail and the broadcaster Sky News each have a similar proportion of users from better and less well off backgrounds. 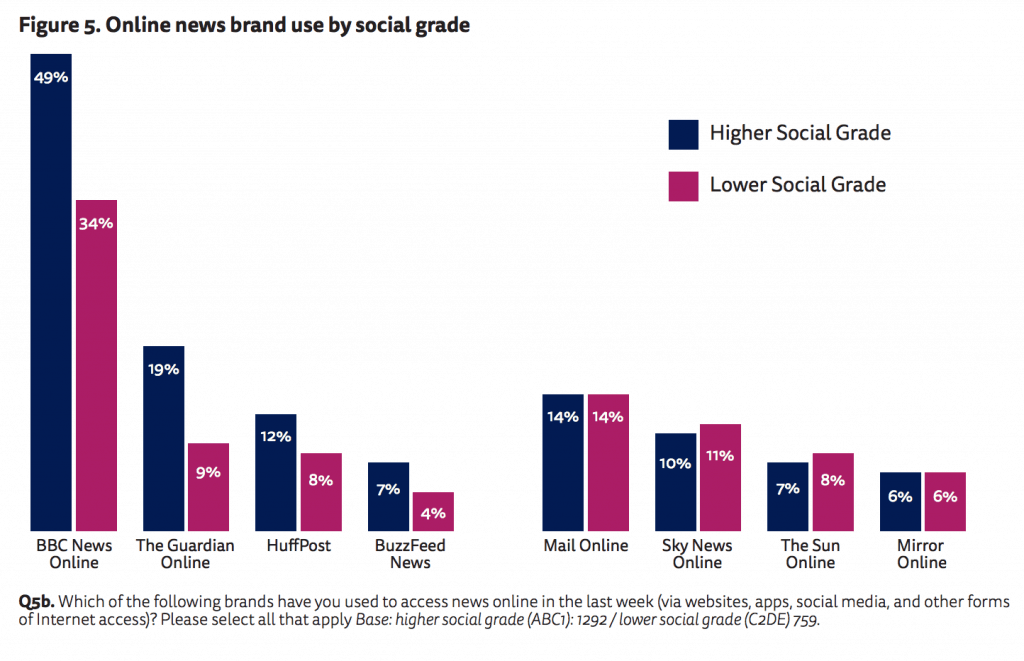 A Critical Challenge To An Informed, Empowered, And Resilient Public

Commenting on the findings, lead author Antonis Kalogeropoulos said: “As we move towards an increasingly digital media environment, the social inequality documented here is likely to increase. While less visible than the political polarisation of some people’s news use, we would suggest that such social inequalities in news use – here analysed in terms of social grade, but also potentially pronounced in terms of for example age, gender, or ethnicity – is at least as important as the question of how highly motivated and often vocal, and hence visible, partisans use news. In principle, most journalists would like news to reach everybody more or less equally, irrespective of social grade. Despite the ease of accessing news online, today, that is clearly not happening.”

His co-author Rasmus Kleis Nielsen added on Twitter how important is not only to look at polarisation or income inequality but “to pay attention to less visible growing social inequality in news use”, which he calls a “critical challenge to an informed, empowered, and resilient public.”

The full report is published by the Reuters Institute for the Study of Journalism and can be found here.

Felix Simon is a journalist and researcher and a graduate of the University of Oxford’s Internet Institute (OII). He is the former acting editor of the European Journalism Observatory and works as a research assistant at the Reuters Institute for the Study of Journalism. His writing on tech, politics, and the media has appeared, amongst others, in the “Frankfurter Allgemeine Zeitung”, “Die Welt” and “Der Freitag”, the Swiss “NZZ” as well as in the “Telegraph” and “The New European”. He has published in journals such as “Journalism Studies” and “Transformative Works and Cultures”. His research focuses on political communication in the digital age, big data in politics and the entertainment industry, as well as the changing nature of journalism and the media in the 21st century. He also takes a side interest in populism and the future of disinformation. He tweets under @_FelixSimon_.
» Digital News, Research » Who Gets Good News? Apparently Not...