May 13, 2015 • Photography and Video, Short stories • by Sandra Stefanikova 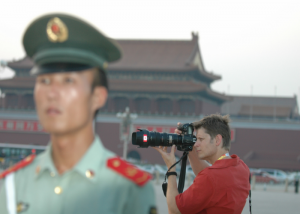 Photojournalism is a threatened profession, according to new research. Over the last two decades digitalisation has led to the most fundamental changes since the invention of photography. New technology has transformed the way pictures are taken, edited and presented, making it easy for anyone with a digital camera and internet connection to take, upload and publish good quality photos.

Many professional photojournalists who lost their jobs during the 2008 economic crisis have been replaced by reporters, citizen journalists and the public, equipped with digital cameras or mobile phones.

Non-professional photography may not be as high quality, but it is usually low-cost, or even free to media organisations. Faced with this competition, photojournalists are losing their status.

These findings are based on our research: “Changing Structures and Content: Photojournalism Practice in the Age of Network Media” conducted by Sandra Štefaniková and Filip Láb, members of Czech EJO team and at the Institute of Communication Studies and Journalism, Faculty of Social Sciences, Charles University in Prague.

Face-to-face interviews were conducted with 30 freelance photojournalists from Central European countries between January and May 2014.

The study found that the position of photographer within media organisations has changed. Despite the importance of visual material to news production, photojournalists feel increasingly less appreciated than their writing colleagues.

Photojournalists are rarely invited, or even allowed, to bring their own topics into the newsroom. Most of their work is assigned to them by editors. They are regarded as an adjunct to the reporting process, rather than as journalists in their own right.

Our research revealed that digitalisation has impacted the entire process of photojournalistic material production. It has influenced technical aspects of the photographic medium and equipment and imposed a new set of newsroom routines and practices.

Digitalisation also changed the position of photography in society; its function, content and use.

One of the key changes is in the production of image content. Visual reporting has been transformed by the availability of virtually unlimited material, high sensitivity and resolution, and photo editing software.

At the stage of image production, photojournalists point out that one of the main differences is a sense of unlimited material. Whereas film negative allowed photo reporters to take approximately 72 photos (two rolls of 35 mm negatives), today they hardly ever take fewer than 250 photos per assignment.

The decisive moment caught on camera – the result of a photographer waiting patiently to capture the climax of an event – has been replaced by the cinematic way of image-taking when several photographs are captured in quick succession. The best images are then selected among the vast amounts of other similar frames.

Photographers we surveyed also admit that they edit at least 95% of selected images before submitting them. Thus, almost all photographs published in media today were edited in some kind of photo software, mostly Adobe Photoshop. Editing of one photograph takes 2.2 minutes on average and may including cropping, exposure compensation, levels, curves, sharpening and colour correction.

Speed is an illusion

Digitalisation is generally associated with overall acceleration within the media context and news production.

Surprisingly, photographers surveyed often talked about the “illusion of speed”. Whereas, every single part of photographic production has accelerated significantly since digitalisation, the overall process, according to the photojournalists we interviewed, takes almost as long as the traditional film-based process.

The illusion of speed might have roots in photojournalists’ fast performance during each stage of process of production and work, particularly when they are working under constant heavy stress. However, the digital environment requires photographers to take on different responsibilities: they spend more time selecting and editing images and creating captions.

With the transition from analogue to digital technology photographic equipment used by photojournalists dramatically improved. Improved features, such as faster autofocus, auto exposure, auto-white balance or much higher sensibility, contrast etc. not only affected the formal quality of news photography, but also diminished the skills needed for photojournalism.

However, the technical quality connected with the creation of large amounts of visual news material can be at the expense of picture and content quality.

Shooting continually with no material limitation results in photo overproduction.

Photojournalists also say they have less or no time to work on traditional photojournalism formats, such as photo essays, reportages, or documentaries. They consider a majority of photojournalistic material published today to be spot, or flash news.

However, the decline of picture and content quality does not concern sport photography. In fact, technical improvements have led to better overall quality of sport photography, according to photojournalists.

Digital technology, vast amount of visual material published, and a lack of skilful photo-editors (for example in the Czech Republic) has given photojournalists a new role. Photographers are often delegated into the role of gatekeeper, deciding which photos should, or should not be published.

This shift of responsibilities and tasks traditionally performed by picture editors is more apparent in the online news media rather than traditional printed newspapers.

Online news media are also released from the limitation of material and space. News organisations might thus publish large amount of visual materials.

A slideshow, the most common tool of online visual presentation, is similar to simple page turning.

All respondents in our survey agreed on this point: the crucial difference between a photojournalist and a writing journalist, or citizen journalist with a camera, is that photojournalists are trained in visual storytelling.

They know how to capture and convey the story and how to build the image. They know the visual grammar and all the factors that must be included in the game of visual storytelling and know how to deal with them.

The photojournalists surveyed agreed that everyone can take pictures today, but this does not make them good photographers.

Equally, everyone can write today, but it doesn’t make them all good writers or reporters.

Sandra Štefaniková is a PhD candidate in Media Studies at the Institute of Communication Studies and Journalism at Charles University in Prague. Her main research interest is the production, distribution and reception of photojournalism. She is also engaged in media content analysis. She is an editor of EJO's Czech site.
» Photography and Video, Short stories » Research: Is Digitalisation Killing Photojournalism?