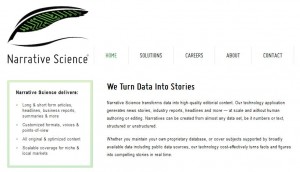 On paper it might sound rather dystopian –  a particularly Luddite fabrication constructed to warn against the potential evils of technology.

An idea such as this may even bring to mind the plot of one of Roald Dahl’s most famous stories, The Great Automatic Grammatizator, in which a man discovers that grammatical and syntactical structures can be converted into numbers.  The man, Adolf Knipe, uses codes and algorithms to create books and novels, thanks to a complex machine he invented.

On occasion, reality may be stranger than fiction. Narrative Science, a new Chicago-based start-up, born within Northwestern University’s School of Engineering and Journalism, has created software capable of synthesizing different types of data to create editorial content and journalistic articles.  What is more stunning, and possibly even frightening for some journalists, is the quality of the outcomes:

“WISCONSIN appears to be in the driver’s seat en route to a win, as it leads 51-10 after the third quarter. Wisconsin added to its lead when Russell Wilson found Jacob Pedersen for an eight-yard touchdown to make the score 44-3… .”

The recap of this NCAA football game doesn’t compare to a Gianni Brera article or Osvaldo Soriano’s romantic match reports, but even the most avid readers of local sports pages may be unable to detect dramatic differences between the Narrative Science text and the content located within local sports pages.

Narrative Science has created the most advanced software yet in the field of automatically generated texts. Before the invention of Narrative Science, this type of experiment typically lead to implausible and mechanical sentences, similar to those seen in Google Translate outputs. While the software was able to think and structure text, it was unable to create imaginative writing.

Oren Etzioni of Washington University, who has been working on a reading machine capable of navigating the World Wide Web, applauded the launch of Narrative Science, saying that the quality of the text was, “like it was written by a human being.”

The sophistication of the results raises questions not only about the value of this type of technology, but also about its implementation in common writing. According to the Narrative Science website, the ultimate goal of the project is to provide low-cost and efficient content, featuring sports stories, financial reports, real estate analysis, local community content, election coverage, advertising campaign summaries, and market research.

The small Chicago-based startup is already off to a good start with 20 customers,  including Big Ten Network, a subsidiary of Fox Broadcasting Co. using Narrative Science for brief sports reports.  The prospects of the technology are vast due to the software’s unique ability to understand and interpret data from different points of view, in addition to comprehending the meaning of expressions and concepts like “touch of the player,” “back and forth,” and “team results.”

The co-founder of Narrative Science, Kris Hammond, who teaches both Informatics and Journalism at Northwestern University, pointed out how his software could bring these two disciplines together.  He didn’t hide his optimism, announcing that a machine could win the Pulitzer Price in five years. The New York Times took a more skeptical approach to the notion of a machine winning literature’s most coveted honor, noting that the inventors of the system would receive the accolades and not the system itself.

It is undeniable that Narrative Science has great potential for development. But for now it’s still difficult to imagine an analysis of the Italian political situation written by Narrative Science, or book reviews and war reports created by machines or algorithms. For now, this concept is still only content for cyberpunk literature.

Philip Di Salvo is a post-doctoral researcher based at the Institute of Media and Journalism of the Università della Svizzera italiana (USI) in Lugano. His main areas of research are whistleblowing, investigative journalism, internet surveillance and the relationship between journalism and hacking. At USI, he also teaches journalism at both the bachelor's and master's levels. Philip received his PhD in Communication Sciences from USI in 2018 with a dissertation on encrypted whistleblowing platforms in journalism. He is also a lecturer at Milan's Nuova Accademia di Belle Arti (NABA). As a freelance journalist, he writes about the social impact of technology for Wired, Motherboard/Vice, Esquire and other publications. Philip obtained a master's degree in Media Management from USI in 2012 and a bachelor's degree in Literature from Milan's Università degli Studi in 2010. He is the Italian editor of the European Journalism Observatory, based at the USI in Lugano.
» Digital News » Narrative Science: If Software Replaced Journalist?