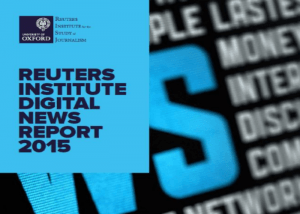 This year’s Reuters Institute Digital News Report is based on research conducted in 12 countries, surveying over 23,000 people. Key findings include a sharp increase in the use of social media platforms to reach audiences, a surge in the use of mobile for news, a decline in desktop internet and significant growth in video news consumption online.

The entire report is available free to download, on the dedicated website www.digitalnewsreport.org.  This includes an interactive graphic allowing users to consult and compare data by country and theme.    In this post I want to focus on four aspects of the report: the challenge to TV’s dominance; levels of trust among users; the rise of global players; and the prospects for paying for news online.

There are significant national differences in the way that news is consumed, found and distributed.  Television news remains the single most important source of news in most places but its position is increasingly under challenge from the young, and in some countries.

Germany stands out against that trend; the number of respondents who used television as a source of news in the previous week has hardly changed since 2012, even among young people (58% of under-35s in Germany still watch a scheduled TV news programme).  Social media growth is less pronounced in Germany: only 23% of those across all age groups who accessed news in the previous week, named online (including social media) as their main source of news over that week.

Television news also remains strong in Denmark. Over the past four years online and social media use has grown at a faster rate in Denmark than in Germany, but the number of people who continue to use television as a weekly source of news in Denmark has barely changed.

Elsewhere there are signs that TV is losing its dominance, particularly in the US and UK and especially among people watching scheduled news bulletins.

In the United States, 44% of people surveyed, who had accessed news in the previous week, said TV had been their main source of news, down from 53% in 2013. This trend is particularly pronounced in the under-45s. Only 31% of those surveyed in this age group named television as their main source of news in the previous week, compared to 42% in 2013.

Overall, France, Germany and Japan demonstrate the strongest allegiance to traditional media, and have also been slower to adopt digital trends.

Even within the countries slower to use online media there are marked generational differences: for example, young Germans and Japanese generally prefer online news and social media to TV news, radio or print.

Facebook and Facebook-owned apps, such as Instagram and WhatsApp, serve as gateways to news for many young people. 41% of consumers surveyed across all countries access news via Facebook each week, nearly twice as many as the company’s closest rivals (You Tube, 18%, Twitter 11%). This represents a 6% increase over the ten countries surveyed in 2014, when 35% of consumers used Facebook to access news.

Despite concerns about technology companies acting as news aggregators and creating a news ‘filter bubble’, many users say social media helps them to find a wider range of stories and from a wider range of sources, than they might have through traditional media outlets.

Trust in the media

Significant differences were revealed in the levels of general trust in the media. In Finland 68% of those surveyed said they trusted the media in general, compared to only 32% in the US, Spain 34% and Italy 35%.

This chart measures levels of trust in the news in general, and compares it to trust in the news sources that respondents ‘use most of the time’. Everywhere there is understandably greater trust in sources regularly used by respondents, but the discrepancy between the two figures and the lowest levels of trust seem prevalent in countries with the most partisan and hence polarised media, such as Italy.  Countries showing high levels of trust generally appear to be those that combine strong independent public broadcasters and well-resourced commercial players.

There are two outliers to this pattern. One is Brazil which scores very high on trust, but the sample we have used is urban-only, and is therefore rather wealthier than the average for the country. The other is Ireland, which scores lower on trust than one might have expected.

Traditional news organisations are facing multiple forms of competition.  Some are from born-digital brands in their own country, but this year’s report also traces the impact of global digital brands, such as The Huffington Post, which operates in 14 countries around the world. The report found, after data was weighted for population, that 10% of those surveyed across all countries had accessed news via The Huffington Post in the previous week. Four per cent of those surveyed had accessed news via Buzzfeed in the previous week. Buzzfeed has doubled its reach in the UK and US in the past 12 months.

Global aggregators, such as MSN (8% of those surveyed globally had accessed news via MSN in the previous week) and Yahoo (18%) also continue to perform strongly – Yahoo’s figure is high due to its popularity in Japan.

The report also notes the success of traditional global news brands, such as the BBC (8% of those surveyed had accessed news via the BBC in the previous week), CNN (6%), New York Times (5%) and, in the English-speaking world, The Guardian (2%) and Mail Online (2%).

Prospects for paying for news

The percentage of people paying for news online remains low. The lowest was in the UK, where only 6% had paid for news in the past year, Finland is the highest at 14%.

Asking how many people might pay in the future produces little encouragement. Once again the country with the most reluctant payers is the UK, where 75% said they would not pay for online news whatever the price.

In the US the figure is 67%, 63% in Australia and 59% in Spain. Of those who would consider paying for online news in those countries, the average maximum amount ranges from $US8.50 in the US, to $AUS4.50 in Australia.

Other ways to pay for journalism don’t look much more promising. With the rise of ad blocking software (47% in US and 39% in UK “regularly use ad-blocking software”) and the announcement from Safari that they will offer a built-in ad blocker, the prospects for banner advertising look bleak.

The report also includes some specific research in the US and UK on native advertising, or sponsored content, suggesting that these are viewed with suspicion by many users, at least if they are used around news, as opposed to features.

Even where the 12 surveyed countries offer similar levels of internet access there is a remarkable diversity in how users access the news.

Earning revenue from digital news – other than for specific targeted specialist news sites – is still a major challenge for publishers. As Rasmus Kleis Nielsen, Director of Research at the Reuters Institute said: “Our research indicates that most people like news and use news, but they don’t want to pay for it, don’t want to see advertising around it, and don’t want to see it mixed up with sponsored content. This means sustainable business models remain elusive even for those who succeed in building an audience.”

In his excellent essay written for the report, Mind the Gap, James Harding, the BBC’s head of news, contends that gaps between consumers of online and offline news, as well as generational gaps, are widening. His essay focuses on equality of access to news in the digital world but many journalists and publishers might share his conclusion that “the digital future is fabulous, but it is not fair.”

Dr David Levy is the Director of the Reuters Institute for the Study of Journalism at the University of Oxford. He has served as a member of the French Parliamentary Commission, reviewing the future of France Télévisions. He was a Visiting Professor at Sciences Po in Paris from April to June 2012 and was previously a visitor to the Centre for Global Communications Studies at the Annenberg School of Communications, University of Pennsylvania.
» Digital News, Recent » Digital News Report: More Mobile, Video...