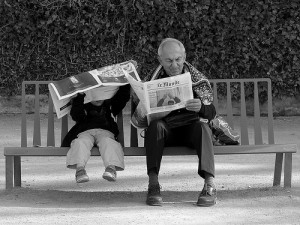 According to the latest 2012 Swiss Social Report, there is no generational conflict in Switzerland – the old and the young simply do not communicate.

Following the publication of the report, television news program “10 vor 10”, asked adults both young and old how they felt about the current social security system and its struggle to maintain itself amid the increasing barrage of new pensioners. “They just have to struggle then, like we did,” says an older woman. “I am not worried, that is something for later,” answers a young man. In the meantime, cries for social security-reform are becoming louder. Is it time for a wake-up call? And if so, what role will the media play?

Although there is an increasing number of aging adults in our society, their demographic is scarcely visible in traditional media outlets (newspapers, television, film, magazines). Numerous studies have shown that aging populations are seldom covered by the media, and when they are it’s often in a stereotyped and negative way. This kind of unfavorable media discourse affects the population in a variety of ways, from encouraging negative self perception to influencing ways in which legislation is designed and implemented.

The key to understanding the issue is learning what kind of discourse is most prevalent in our society. Demographic changes are complex and they put our social systems to the test.  According to the international study Eurobarometer 2012, “a number of challenges for the welfare system and public finances” will emerge as a consequence of these changes.

As we are all involved, it is worth examining the ways in which media outlets cover our aging society. Should the media pay more attention to social security, the influence of immigration, the need for lifelong learning, or the outstanding life conditions responsible for this astonishing rise in life expectancy? Not only what is presented by the media is interesting, but also how it is presented. The way we title issues usually invokes a certain line of thinking. For example, the words “stubborn” and “single-minded” may have similar meanings, but the way these terms are perceived can vary by individual. When considering our aging society and social security system, the term “generational solidarity” suggests cooperation among younger workers and their older colleagues (as the youth understand that they themselves will be retirees one day).

Another example is the term “mathematical correction” which suggests that the system is no longer valid due to the nation’s current demographics, and should therefore be corrected. And if the social security system were to be described as a “financial burden on young families,” this would have another meaning altogether. So why is it important to examine coverage about our aging society? Because what is read, spoken, and thought about our aging society now will influence our response to the social challenges that lie ahead.

Karen Torben-Nielsen is a researcher at the Institut Alter in Bern and a Ph. D. student at Università della Svizzera italiana, working on a research to compare how newspapers in Switzerland and Belgium cover citizens 65 and older.

Karen Torben-Nielsen is a PhD-candidate at the University of Lugano and works at the ‘Institut Alter’ of the Bern University of Applied Studies (Switzerland). She investigates the coverage about the Ageing Society in various, international newspapers.
» Specialist Journalism » “Growing Older” or “Staying Young”