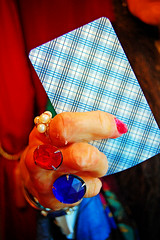 Anyone sitting in front of the television in Italy for half an hour, especially in the evening, would soon believe we’re all in dire need of a clairvoyant.

This is because astrologers, fortune-tellers, and all sorts of psychics claiming to be blessed with supernatural powers are thriving on a variety of small and private channels.

A woman who fell victim to the famous television healer Vanna Marchi testified: “I told her my son had cancer. She gave me a private consultation for a big sum of money. She said that the case was severe and that in order to ease the progress of my son’s illness, she needed quadruple the amount. If I did not pay, my son’s fate would be tragic. I told her firmly that I wouldn’t give her any more money. She replied that I didn’t love my son”. Marchi was later arrested and her television programme was cancelled.

According to the institute of political, economic and social studies Eurispes, 13 millions of Italians consult fortune-tellers every year for a total business volume of EUR 6 billion. This means that 35,000 women and men pay a total of EUR 1,6 million a day for the services of a medium.

Data compiled by the Italian tax police Guardia di Finanza indicates that 150,000 psychics are practising in the Italian Peninsula.

Surprisingly, a high rate of mediums, 42 percent, are living and working in the rich northern regions, rather than in “Mezzogiorno” (southern Italy), which has a reputation of being the most superstitious part of the country.

Indeed, the 2011 annual report Magic and Occultism in Italy compiled by consumer organisation Telefono Antiplagio, denounced thousands of cases of abuse for profit and confirmed that the worst affected region is paradoxically the most developed Lombardy.

Campania and Lazio come second on the list, with the cities of Naples and Rome at the top. Sicily occupies the third position.

Financial deals with television channels
Why are spiritual programmes flourishing on local private television channels? The reason seems to be that small channels have established a large amount of contractual agreements with psychics, in order to secure a solid base of paid sponsorship to help them survive.

A former television fortune-teller recalls: “I used to invent things to scare callers and tell them things like “Someone has cast a deadly evil spell on you,” so that they would ring us 20 times. We were experts in brainwashing.”

On screen, psychics emphasise the fact that they do not charge high fees.“Mago Mariano” opens his programme with the words: “With little money I will put an end to all your misfortunes and you will not have to lie in despair on your sofa anymore.”

In reality, however, “psychics are able to drain big amounts of money,” says professor Giovanni Panunzio, a teacher of religion in Sardinia and the founder of Telefono Antiplagio. “Because of the crisis, their prices have gone down, but demand is also rising.”

Some of them hide their large profits, evading even the “Fisco” (tax office).  “The most frequent criminal activities among psychics are fraud, extortion, unauthorized practice of medicine, abuse of people with mental disabilities,” Panunzio explains. “Only five percent of the cases are reported to the police, because of the victims’ fear of being blackmailed.”

Giletti often obtains interviews with families who confess pathetic stories of their ruin: “We are up to our necks in debt for trusting these television swindlers,” one victim said.

The power of magic
Why are such live programmes so popular, one might ask? And what are their loyal viewers looking for?

More than half of the people who pick up their phone to take part in the programme, or 52 percent, wish to solve sentimental troubles.  Another large group of callers, 40,5 percent, are curious to find out what the future has in store for them;  viewers’ questions can also be related to job hunting, 24 percent, or to health issues, 13 percent. A smaller group of callers, 6 percent, are seeking to get rid of the “malocchio” or evil eye.

Psychic television programmes attract two opposite categories of viewers: the believers and the skeptics. The latter usually watch for entertainment purposes or out of curiosity for the mediums’ often excentric looks, accents and manners.

For callers, the danger lies in the fact that psychics invite them at the end of the show to ring them back, with the intent to create dependency, as highlighted by the Cicap study.

On television the average age of the callers is 42 years old.  Fifty-one percent are women, 38 percent are men and 11 percent are adolescents. Fifteen percent of them have a university degree. They spend between EUR 30 to 600 per session.

Vittorio Amedeo Marinelli, who works as a lawyer for Telefono Antiplagio, describes the level of attention given to magic in the media: “Leading publishers sell more advertising space to psychics. At the top of the list, Berlusconi’s Mediavideo promotes psychics’ services on its three main channels 24 hours a day. Pagine Gialle (Yellow Pages) by Seat comes next. It is followed by the RCS Group with their magazine Astra.”

The emergence of online psychics
Now Facebook and Ebay are also publishing advertisements for magic readings.

Due to the high level of unemployment a new type of online psychics has also emerged.  Unemployed people, students and housewives are being recruited as receptionists with occult powers. “It’s a war among the poor,” lawyer Marinelli said.

It is difficult to investigate the accurate number of psychics who are practising online.  On their websites, they offer talismans warding off the evil eye and potions that rekindle the flame in a worn out relationship.

They also promise big winnings. Michele R. testifies: “An internet clairvoyant predicted me a big scratch card win within the next few hours. I rushed to the tobacco shop and bought a scratch-card. I scratched it. Look what I won: two euros. I should denounce that site.”

Online medium “Professor Alpha” was arrested after being denounced by a woman whom he had forced to pay millions of euros for a rite of protection against bad luck he performed through his laptop.

Father Gabriele Amorth, the former Chief exorcist for the Vatican, said: “Channels hosting frauds and treating them as scientists, must be blamed.”

Self-regulation?
In the end, the question boils down to the age-old argument: who is to blame, the drug user or the drug dealer?

Beyond the fact that wrongdoings require punishment, the important issue in moral terms is to test the efficiency of the self-regulation code for tv shopping and cartomancy introduced by the former Minister of Communications, Maurizio Gasparri.

“That law is a gift for charlatans who want to misuse television,” says Panunzio, “because they do not commit their crimes in front of the cameras, but behind the scenes. This often happens with the channels’ complicity: their owners and managers pretend not to see nor hear anything.”

According to Article 21 of the Public Safety Laws “Testo Unico Leggi Pubblica Sicurezza”, it is illegal for anyone to engage in charlatan activities.

“So why do many of them advertise on television? Because the Gasparri law lends credibility to quacks,” Panunzio argues.

The best advice? Simply do not fall into their nets.