With Journals Gone, Let’s at Least Save Journalism 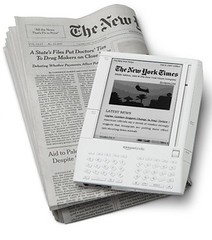 As we find ourselves caught in a media pandemic, an open mind may carry us beyond the wreckage.

“You have to be incredibly open to every idea,” advises John Byrne, director of the online weekly Businessweek.com. Early this year, Clay Shirky, digital guru and professor at New York University, suggested 2009 would be “a bloodbath.” According to Shirky, our focus shouldn’t be on saving newspapers, but on the preservation of journalism.  Now is the time to experiment and be daring, and some don’t need to be told twice.

Conceptually it works like the traditional model, which allows one to download and read books (for a fee) in a mere 60 seconds, however the new 3.2 GB model is designed for reading daily papers, equipped with a larger screen to retain the original layout of a printed newspaper.  The gadget also allows one to read atlases, illustrated books, graphics, manuals, and magazines in PDF format.

For the Kindle DX to succeed, it must convince publishers of its great potential and appeal to members of the new generation. The New York Times, the Boston Globe and the Washington Post have already signed agreements with Kindle, and they’re not alone.  Anyone who owns a Kindle in the United States can already subscribe to around sixty daily papers and periodicals, including the Wall Street Journal, the New Yorker, and even the Corriere della Sera. Yet while some publishers are willing to hedge their bets on the Kindle card, others are disgruntled because Amazon – according to a handful of publishing house executives – would pocket 70 percent of profits derived from subscriptions. Perhaps for this reason NewsCorp magnate Rupert Murdoch announced that he’d be opting out of the agreement, preferring instead to create his own digital platform to gather news from his online sites, accessible through a system requiring readers to pay for each downloaded article.

Still, Kindle seems to be catching on among young readers– simply scan any international airport to find someone gazing into the device, a sign that it may very well replace both newspapers and magazines.

Natascha Fioretti is a research assistant at the University of Lugano. She's the EJO’s Italian Web Editor and coordinates and promotes EJO events. Bilingual in Italian and German, she earned a degree in Foreign Languages and Literature Studies at the Università Cattolica del Sacro Cuore di Milano and a Master’s degree in New Technology Enhanced Communication for Cultural Heritage obtained at the Università della Svizzera italiana. As a freelance journalist Natascha writes for a variety of print publications.
» Digital News » With Journals Gone, Let’s at Least...