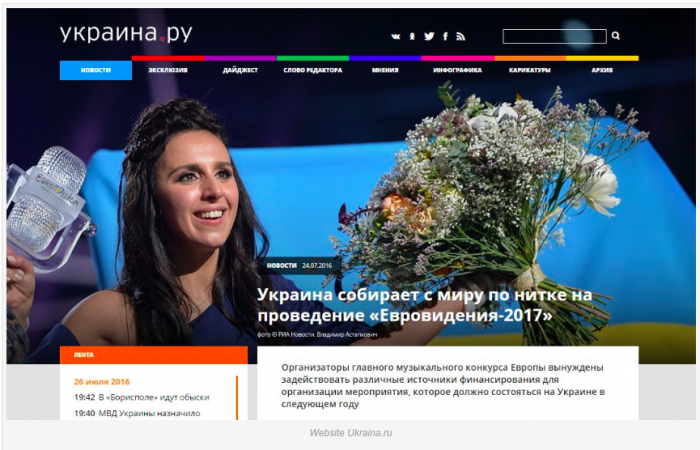 A Russian website’s ‘news’ story, claiming Ukraine is unable to fund the 2017 Eurovision Song Contest, has been denied

StopFake was set up in March 2014 by teachers and graduates of the Kyiv-Mohyla School of Journalism. It aimed to counter a rise of ‘information aggression’ from Russian sources that followed Kiev’s EuroMaidan protests and Russia’s annexation of Crimea.

“Russian propaganda hasn’t disappeared; it’s just become more subtle and sophisticated. It is now spreading beyond Ukraine, to other European countries. I would say they mastered those mechanisms here in Ukraine and now use it effectively in Europe,” Deynychenko said.

StopFake is adapting to this new challenge and has broadened its remit. The site now aims to increase awareness of fake news across other post-Soviet countries and the EU, as well as in Ukraine. “We want [others] to learn through our errors and use our experience in countering Russia’s propaganda,” Deynychenko explained.

The StopFake team also promote media literacy and conduct research into how propaganda works – and how to counter it.

The site, which originally operated only in Russian and English, now has platforms in Spanish, Italian, Romanian, Bulgarian, French and Dutch. Czech and German language versions have recently also been launched.

Most StopFake editors are native speakers, living either in Ukraine or their home country. They translate news from Russian or English into their native language and monitor their local media content for Russian spin.

Voerzio cites his favourite examples of fake news stories and hoaxes that have appeared in the Italian press: Marta Grande, a representative of Beppe Grillo’s movement, claimed Ukrainian soldiers are cannibals; an Italian journalist said Ukrainian nationalists are fighting in Aleppo on the side of ISIS; Berlusconi’s Il Giornale claimed that Sergei Polunin, the ballet dancer, was a Nazi Ukrainian. 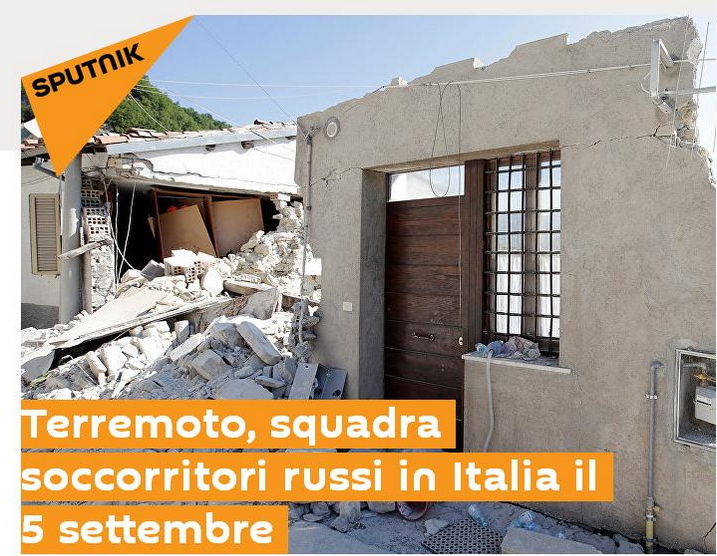 Claims made on Sputnik’s website, that a Russian rescue squad was being sent to Italy after the 2016 earthquake, were officially denied

Voerzio believes  many anti-Ukrainian fake stories that appear in Italy’s media are spread by organisations owned by Silvio Berlusconi’s powerful media-owning family. Berlusconi himself is reported to have a close friendship with Vladimir Putin.

Russian news sites, such as Sputnik, also disseminate content in Italy, through their own sites or social media, in the Italian language.

Voerzio said there is a market for Russian content in Italy. “Here in Italy we also have a very strong communist community which considers Putin to be a new Stalin who is going to restore the dream of communism in Europe. There are also people who follow the political organisation of Beppe Grillo, an Italian comic. They also have strong ties with Russia.” Lega Nord, a xenophobic political party, is another Italian group with possible Russian links, Voerzio added.

Most of the early followers of the Italian StopFake platform were members of the Ukrainian diaspora in Italy, but Voerzio believes the site’s audience is changing.

“Many Italians started to follow our page. Journalists have begun to understand that there is something wrong with Russian propaganda and it’s not normal that some Italian political parties speak more about Russian sanctions than about Italian problems,” he said.

Responding to the new challenges

In Kiev the StopFake team works for both foreign and Ukrainian audiences. Apart from the website, they produce Russian-language audio newscasts transmitted by Hromadske Radio to a number of Ukrainian towns including those in the Donbass region, an area at war.

“It’s very important, as we even have Ukrainian-controlled territories in the east where people don’t have the chance to watch Ukrainian television because it either doesn’t reach these areas at all or Russia blacks it out with its TV towers from its territory,” Ruslan Deynychenko explained.


StopFake recently held a series of fact-checking workshops in Ukraine, Kazakhstan and Georgia. Together with colleagues from central and eastern European countries, the team has launched a project designed to counter pro-Kremlin disinformation. In early November, the website also joined the social platforms/global newsrooms network of First Draft partners which aims to improve the quality of online journalism.

On its website, StopFake emphasises that it is not funded by any official Ukrainian organisation or government agency, and that its main aim is not politics, but journalism. “We are a journalists’ organisation whose primary goal is to verify information, raise media literacy in Ukraine and establish a clear red line between journalism and propaganda.”

The network is funded by crowdfunding and donations. It is also supported by the international Renaissance Foundation, the Foreign Ministry of the Czech Republic, the British Embassy in Ukraine and the Sigrid Rausing Trust.

You may also be interested in other EJO stories about StopFake:


“Russian Media, Ukraine and the Battle for News”

Halyna Budivska is a PhD student at the Mohyla School of Journalism, National University of Kyiv-Mohyla Academy. She is also the editor of the Ukrainian website of the EJO.
» Ethics and Quality, Latest stories, Media and Politics » StopFake, Ukraine’s Fact-Checking Site, Expands Across...