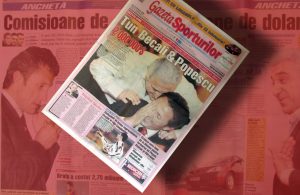 “Dosarul transferurilor” (The transfer papers), an investigation into allegations of corruption in Romanian football which led to seven convictions, just one of a series of investigations by journalists at the Sports Gazette newspaper.

Over the past 16 years, a team of four sports journalists at Romania’s last remaining print sports newspaper, Gazeta Sporturilor, has been responsible for some of the country’s most devastating investigative journalism. Their articles have led to dozens of convictions, changed government policy and contributed to social reform.

Some of Romania’s best-known politicians, business figures, football players and sports leaders have been convicted following their investigations. Their work has been so effective that some joke that if Gazeta Sporturilor (The Sports Gazette) writes about you, it is time to order your prison uniform.

The journalists themselves say their aim is not simply to get convictions, but to pursue truth and the greater public good. In an interview with EJO they said they do not keep count of prosecutions arising from their work. “We don’t draw a line on a paper for every man we take down,” explained Cătălin Tolontan, the newspaper’s editor-in-chief and the head of the investigative team.

“And we don’t believe we are the only ones seeking justice in Romania. We just receive information, decide which to follow, and get to work. We don’t think of our investigations in terms of the judicial system. We do our duty to tell the stories, we are not part of the stories,” Tolontan said.

“We believe it is our duty to tell the truth so that it becomes public knowledge. What the prosecutors do with that information is none of our business,” he added.

The four investigative reporters help each other, but they do not cooperate with prosecutors. “We never give official statements, we don’t offer evidence, we keep every piece of our investigations to ourselves. All they can find out from us is what the public also knows, from reading the newspaper. We print every piece of worthy information, and that is our only duty,” Marius Mărgărit, another team member, said.

The journalists keep digging even when, occasionally, prosecutors ask them to stop. ”At the beginning they kept asking us to stop working on our investigations. They said we were making it harder for them.”

Tolontan said the team always ignores these requests and the prosecutors eventually give up: “We don’t really care about their investigations. We care about what the public wants. The public wants the truth.”

“Sportsmen” writing about the health system

In recent years, the Gazeta team has uncovered problems in the medical system (diluted disinfectants used in operating theatres, doctors paid by medical suppliers etc), and in government ministries such as the Romanian Tourism Ministry and the Romanian Youth Ministry. They have investigated allegations of bribes and fraudulent contracts within the public system.

So what motivates them to go out of their sports journalism comfort zone and enter new areas of expertise? “Coming from the outside is an advantage. We have that simple curiosity to ask questions and receive answers. Plus, people tend to discount you. Because, they say, there’s no way a sports journalists would write a pertinent article about practical issues of the health system,” Tolontan said.

He also believes that medical journalists have grown too close to their subjects, losing objectivity. “Whenever people have a health issue, they ask their medical reporter colleagues to help them get to a good doctor. After they helped so many people, how can we pretend that they can write good investigative pieces about these same doctors.”

One of the team’s recent projects had a tragic end. The CEO of a company they were investigating committed suicide after his company was revealed to have produced diluted disinfectants and supplied them to hospitals across Romania.

I asked how such events made them feel. The question sounded very loud in the glass-walled room. They all stared at the table and the room briefly went silent. Eventually one reporter replied: “People don’t kill themselves over what the media writes. They have other things pressuring them. And we always think we have to choose the greater good: the public interest. How many people died in Romanian hospitals, catching impossible to treat infections, because their surgeries were performed with improperly sterilized instruments?  We have a duty to tell the truth.”

Their eyes tell of the dilemma they clearly feel, between their duty and their doubts. They sense the question before being asked: “We always have doubts before publishing the first story. We don’t doubt our information. That, we have triple checked thoroughly. We realise the impact we will create once the paper goes to print and we know we are about to shake society once again. And that cannot leave you untroubled,” explains Mirela Neag, another team member.

Being an investigative journalist in Romania is not easy. But it is not quite as dangerous as it appears in American spy-movies, where journalists sometimes use guns to defend themselves. However, there are some consequences of criticising the system. “They try to denigrate us and use the state’s authority to intimidate us. We have been investigated by the ANAF (National Agency of Fiscal Administration), and supervised by the secret service. The funny thing is, the more they try to cover up an issue, the more they try to scare you, the more motivated it makes us. So we write better, and do our jobs better just so we can prove we won’t quit.

“Mostly, they try to intimidate the sole woman in our team. They believe her to be the weak link and they try to push her,”  Cătălin Tolontan said.

But it is clear that Mirela, the only female team member is very strong. She simply shrugs her shoulders to indicate that for her, the subject is not even worth discussing.  Then she changes the subject: “the good thing is that in the last 10 years they stopped trying to buy our silence, to bribe us. Times have changed, there’s no more room for things like this.”

In its 2015 report Freedom House classified Romania’s media as ‘partly free’. It reported that press freedom is protected by the constitution, but weakened in practice by financial insecurity and overriding political and business interests. Investigative journalism in the country is declining due to commercial pressures, according to Freedom House.

“Media is the only chance democracy has”

In a context of a dying press, where the influence of politics and the rise of fake news, click bait and poor journalism is destroying public confidence, the investigative journalists at Gazeta Sporturilor see the light at the end of their investigations. They feel the public’s support behind every line they write and they believe they are helping to change an increasingly confused society, one that strives to find solutions to ongoing problems. “When lots of people feel exhausted, they turn to the press. They don’t trust the system anymore, but they trust journalists. Media is the only chance democracy has,” Tolontan said.

And he knows best because, without him, all these investigations might not have happened. He does not say it himself but his colleagues do, after he has left the room. Then they all stand up and return, one after another, to their desks. Their laptops wait, with tons of emails sent by readers. Suggestions, tips, cries of help, subjects that wait to be investigated, discovered and written.  The work of these four journalists, and others like them, represent media freedom and hope for democracy.

Anamaria Nicola is editor of the Romanian version of the European Journalism Observatory. She is associate professor at the Faculty of Journalism and Communication Sciences (University of Bucharest) and has worked for 8 years as a special reporter, live correspondent, news editor and producer for major sports newspapers and TV stations in Romania. In 2012 she published a manual on ”Live Reporting” (in Romanian, at Polirom) and in 2014 she contributed with a chapter on women integration in sports media for a book called ”Gender, Mass Media, Representations – Social realities and media representations”. She is a PHD and is publishing the main research of her thesis in a book called: ”The news of terror - emotions in the media”.Email: [email protected]
» Ethics and Quality, Latest stories, Press Freedom » Romania: The Sport Reporters Uncovering Corruption,...