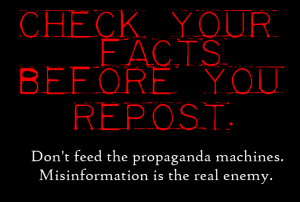 An alarm signal is sounding from Italy. Media researchers there have analysed how misinformation and conspiracy theories spread via social networks, such as Facebook, much faster than news from more reliable sources.

A team of researchers, led by Walter Quattrochiocchi of the Institute for Advanced Study, Lucca, analyzed 270 000 postings from 73 Italian Facebook pages.

The sobering result: researchers and journalists who are trying to serve their audiences with objective news, in the traditions of enlightenment, are unable to debunk effectively targeted disinformation.

They simply cannot compete with the speed and the intensity with which nonsense spreads, through ‘likes’ and ‘shares’.

Journalists who try to discover the truth, and provide balanced judgements, have always experienced difficulties in the highly politicized context of Italy’s mass media, but in social media they seem to have completely lost ground.

Researchers in Anglo-Saxon and German-speaking countries agree that the mainstream media and serious journalists have lost their role as dominant gatekeepers in the public sphere.

However, they continue to discuss the controversial consequences for society. Internet gurus like James Surowiecki and Clay Shirky, who believe in swarm intelligence and in the ‘potential of the many’ to induce change, are fighting with sceptics who are frightened that trolls and the mob have taken over social networks and commentary sections.

Recently, the pendulum has been swinging towards the sceptics.

Several serious news media have organised ‘hate slams’ – public events where journalists/newsrooms present the most aggressive, stupid and hateful reader comments they have received recently – to make their public aware of unreasonable and negative reader comments.

Others have closed down their commentary sections as they could neither control the disinformation, nor the sleaze. The findings of the Italian researchers are even more discouraging.

Nevertheless, we should not give up. According to Albert Camus, we should imagine Sisyphos being happy, even if he has to push the rock up the mountain knowing that will roll down again and again.

This article originally appeared in Tagesspiegel