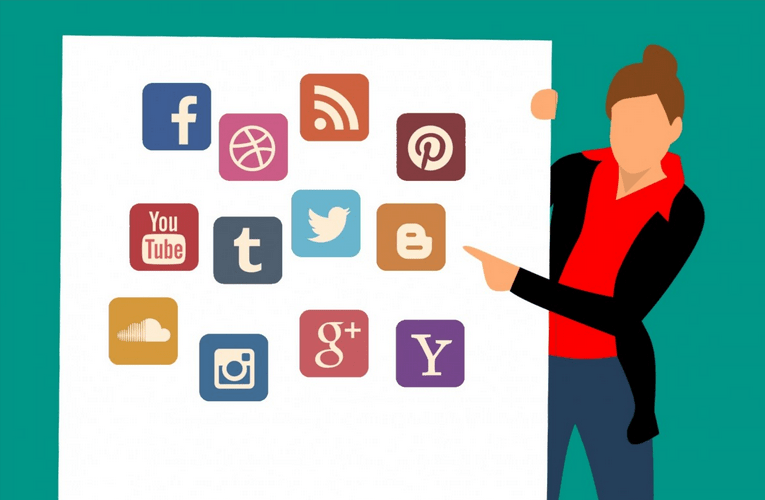 It feels as if half the world usually sees Donald Trump’s latest tweets – because the media quote them, comment on them and inadvertently help them to spread even further.

Nowadays, journalists use social media as a source on a regular basis. The days when social media only counted as a legitimate source if journalists had no other access to events like disasters or civil war have long since passed. Instead, they have become part of the fabric of modern journalism.

How Popular Is Social Media As A Source?

Yet, how often are Facebook and Twitter really used by journalists as a source? Our study tried to find out. For this purpose, we used computer-assisted methods and manual analysis to analyse reporting in the newspapers Süddeutsche Zeitung, New York Times and Guardian between 2004 and 2016 (analysing a total of approximately three million articles).

The days when social media only counted as a legitimate source if journalists had no other access to events like disasters or civil war have long since passed.

Many older studies work on the assumption that the use of social media as a source has recently been stagnating in quantitative terms. And in some sense they are right. We did, in fact, discover a levelling-off of the adaptation curve (see graph 1): year by year at the beginning of the decade, fewer new people registered on social media platforms; in parallel, the growth in the number of references to social media in journalists’ reporting also stagnated.

But this plateau-forming phase has come to an end. As our study shows, the number of social media quotations has increased noticeably in the last few years. The intensity of growth as well as the absolute level are higher in the Anglo-American newspapers than in the German Süddeutsche Zeitung; but the trend can be seen here, too. In all three papers, journalists quote ever more platform content. Twitter, despite its significantly smaller user base in all countries, is more popular than Facebook. The journalistic adaptation of social media as a research tool has clearly not yet come to an end. 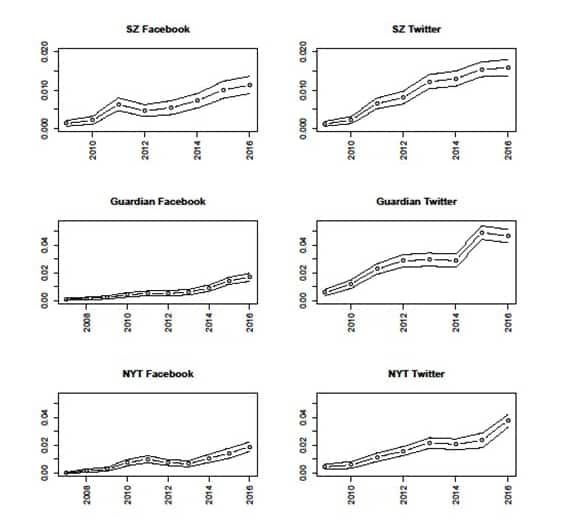 Using computer-assisted methods and manual analysis the texts published in the period surveyed (NYT = 1.175.636/ Guardian = 1.298.334/ SZ = 85.1667) were searched for articles in which the words “Twitter”/ “tweet” or “Facebook” featured as the reference for a quotation. The diagrams present the percentages of these articles in relation to the entire corpora – with 95% point-by-point confidence intervals.

Unfortunately, we cannot say much about the reasons for the increase. However, various factors are likely to play a role: younger journalists, in particular, have a greater affinity with the medium and, for years, editorial offices have also been professionalising their social media activities. The crisis around journalistic business models – less time for research and news agency closures – may be favouring social media use as does the ever-growing number of potential sources with celebrities, sportspeople and politicians now all using social media, in some cases, excessively.

Especially for the case of Twitter, we can trace the increase in references, above all, to the increase in the elite sources quoted (see graph). The supposed medium of the masses is, essentially, a mouthpiece for those who were already determining the headlines in the pre-digital age. This attracts journalists whose presence, in turn, triggers an influx of further elites – the platform thus develops into an irresistible gravitational field for everyone who is searching for mass-media attention, including propagandists and conspiracy theorists.

Comparison of the articles in which elites (politicians, celebrities, corporate representatives etc.) and non-elites are cited as the source by Facebook or Twitter – each as percentages of the entire corpus with 95% point-by-point confidence intervals.

Another reason for the development we observed may be the platforms’ own policies. After Facebook had gone public, the platform attacked its competitor Twitter by adapting its algorithm with the aim of making itself more interesting for journalists. Facebook also increasingly used hashtags and introduced the “FB Newswire” app to encourage journalists to use the platform for their work.

What Will The Impact On Quality Be? We Don’t (Yet) Know

It is still unclear what impact the use of social media as a source has on the quality of journalism. It should, however, be clear that caution is required when using social media as a research tool. In a new study, communication researcher Sascha Hölig traces two current trends: on the one hand, the increasingly vehement criticism of journalists for having lost touch with the lives of ordinary people; on the other, the widespread use of Twitter amongst journalists and politicians as “a means of research and an informal barometer of public opinion.” Whether there is a connection between these two trends cannot be definitively clarified but it does not seem entirely implausible.

The supposed medium of the masses is, essentially, a mouthpiece for those who were already determining the headlines in the pre-digital age.

Other studies have also identified Twitter as reflecting a distorted image of reality: the title of a study by Usher, Holcomb and Littman says it all: “Twitter Makes It Worse: Political Journalists, Gendered Echo Chambers, and the Amplification of Gender Bias.” The US researchers found evidence of “gender silos” on Twitter. They discovered that male journalists have more followers and preferentially reinforce male colleagues; female journalists also keep mostly to themselves.

How Should Journalists Deal With Social Media

What can we learn from all this? Should journalists renounce social media? For all its disadvantages, digital intermediaries do, of course, have the potential to make journalism better, more diverse, more immediate. But despite all the euphoria that accompanied the adaptation of social media in the past, the pitfalls they entail cannot be ignored. What is missing so far are established reflective practices for handling the new tool with detachment.

Platforms and journalism intertwine on different levels: they are important channels for journalism, powerful traffic referrers; they advertise with initiatives and millions in sponsorship for collaborative partners in the media sector. From the journalists’ perspective, it is the embrace of “frenemies”, as Emily Bell has called the intermediaries: friends and enemies all in one. In order to preserve independence and remain sensitive to social reality, journalism has to keep its distance – in all directions.

The full study “Sourcing the sources: An analysis of the use of Twitter and Facebook as a journalistic source over 10 years” was published in Digital Journalism and can be found here.

Dr Gerret von Nordheim is a postdoctoral researcher in the field of communication science at the University of Hamburg, Germany. His research focuses on intermedia effects in the hybrid media system, especially between journalism, social media, and populist actors. He specialises in computational methods.
» Research » Journalists Quote Social Media Content Ever...