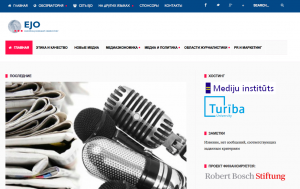 In keeping with the European Journalism Observatory’s mission, EJO Russian aims to promote research, ideas and knowledge exchange between media researchers and practitioners.

The website will inform Russian-speaking journalists, media academics and students about  developments in European media.  In turn, EJO websites across the network will translate stories about Russian media into European languages.

News media in Europe and the United States often focus on Russia’s political climate and the difficulties it creates for journalists working there. EJO Russian will cover these important issues, but will also present a broad, research-based picture of work being carried out by media academics and practitioners in the country.

Other topics likely to be featured include social media, citizen journalism and journalistic transparency in Russia.

The new website brings the number of languages in the EJO network to 10.

The Russian website is funded by Robert Bosch Foundation and is operated by the Turiba University and the Media Institute, Riga, Latvia.

Dr Ainārs Dimants is Project Director.  He is a media researcher and Professor in Communication Theory at the Turiba University in Riga, alumnus of Faculty of Journalism, Lomonosov Moscow State University (1990) and former Moscow Correspondent of Latvian daily newspaper, Diena (1990–1992).

Dr Andrejs Berdņikovs (Андрей Бердников) is website editor. He holds a Ph.D. in Political Science from the University of Latvia. Russian is his native language and his areas of expertise include media and information culture in Russia and among Russian-speakers in the Baltics.

Evgeniya Boklage is co-editor. She is a researcher in the field of health and science communication in the Institute for Media and Communication Studies at the Free University of Berlin. Evgeniya speaks Russian and has a research interest in Russia’s mediasphere.