What Exactly Is Happening To Poland’s Media? 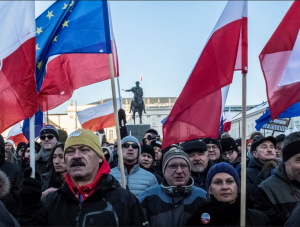 Over the last few weeks Poland’s recently elected conservative government has sacked the managements of public TV and radio, appointed their successors, and closed television programmes considered critical to its policies. It has also announced plans to increase government surveillance powers.

These moves, which followed amendments to Poland’s radio and TV broadcasting laws at the end of last year, have caused public demonstrations and international outrage, including unprecedented EU commission supervision. Undeterred by the widespread criticism, Poland’s ruling party has declared that its media reform is only just beginning.

Relations between politics and the media in Central and Eastern Europe have never been easy and trouble-free. Politicisation of the media, especially public radio and TV, is a key part of this story. Every Polish government in power between 1989 and 2015 has been accused of treating the public media as an instrument of political propaganda.

Even taking into account all these antecedents, the scale of changes implemented by the country’s new government so soon after it came to power last November, is surprising – for national as well as foreign observers.

The government now has the power to appoint key media staff

Recent amendments to broadcasting laws made it legal for the government to fire managers from public TV and radio and replace them with government-friendly publicists or figures from the right-wing media. The media purge has resulted in the resignations of well-known journalists and news anchors. Changes to the scheduling are also expected – popular TV or radio shows, known for their criticism of power, are being taken down or replaced.

But it’s not only the timing and scope of those changes that makes these new regulations so troublesome.

The real problem is that the new law completely shifts the way public service broadcasting chiefs are nominated and controlled. According to the new regulations, the Treasury Ministry has the right to hire and fire them – at any time. Previously, all these procedures were coordinated by the National Broadcasting Council (Krajowa Rada Radiofonii i Telewizji – KRRiT), an  independent institution anchored in the Constitution and serving as a supervisory body for public and private broadcasting in Poland.

The changes have provoked public anger and international criticism

The new model of control stands in complete opposition to what the EU, Council of Europe and institutions like European Broadcasting Union (EBU) recommend in terms of quality and political independence of public service media. Calling on President Andrzej Duda not to sign the bill, EBU representatives stated in an open letter: “[the government changes are] an attack on an institution which will no longer be independent as soon as the measures take effect. In our view, this is the most profoundly retrograde step and will deeply damage public service media.”

“The introduction of a system whereby a government minister can appoint and dismiss at its own discretion the supervisory and management boards, goes against basic principles and established standards of public service media governance throughout Europe,” wrote representatives from European Federation of Journalists (EFJ), Association of European Journalists (AEJ), Reporters Without Borders (RSF) and Committee to Protect Journalists (CPJ).

Referring to this criticism, the ruling right-wing party Law and Justice [PiS] argued that the new regulations had to be introduced to make Polish public service media “impartial and objective”. The PiS argued this was necessary after the country’s previous ruling coalition had taken ‘full and exaggerated control’ over it.

The current amendments are treated by the Law and Justice party as a temporary solution. A full reform of the public service media sector is planned for mid-2016. According to statements from Piotr Glinski, minister of culture and national heritage, the new media bill will transform public service media, and the Polish Press Agency, from commercial enterprises into “national cultural institutions”, which will ensure “stable financing and development opportunities”.

According to ruling party officials, the main goals of the new reforms will be:

The details of these proposals are still unknown as the new media law has not yet been subject to public consultation. What is certain is that this new institutional and legal framework will significantly limit the role and the influence of the National Broadcasting Council and parliamentary control over the media, replacing old mechanisms and practices with direct government control.

All these public media-related changes seem insufficient for the control-hungry government. In its next move, PiS probably would also like to “re-Polonise” (as the party officials call it) the private media in the country, especially in terms of ownership. Ruling party leaders have, on several occasions, declared that Polish media should be “more Polish”. However, these changes are much less probable, as such significant change in the ownership structure wouldn’t be possible without violating important EU rules.

The government has also announced plans to change surveillance laws to allow it greater access to digital data, and to increase police powers to monitor telecommunications and the internet. These proposals were met by more public demonstrations in Polish cities this weekend (January 23rd).

Last week, (19th of January), the European Parliament debated the government’s recent legal amendments, in particular those concerning the media and the Constitutional Tribunal. Although the final outcome of these changes is still unknown and there is little agreement between different European Parliament factions, it is the first time that the EU Parliament has initiated a procedure of EU commission supervision.

It is the first time the EU’s Rules of Law Mechanism has been used, since it was introduced by the European Commission in March 2014. It will investigate whether the new Polish laws concerning the Constitutional Tribunal and the Radio and TV bill/amendments break EU democracy rules.

It is hardly possible that any severe consequences against Polish government will be introduced, however, the leading party should consider this hearing as a first and strong warning.