‘No News From Petrograd Yesterday’: historical perspectives on, and future challenges of, reporting Russia 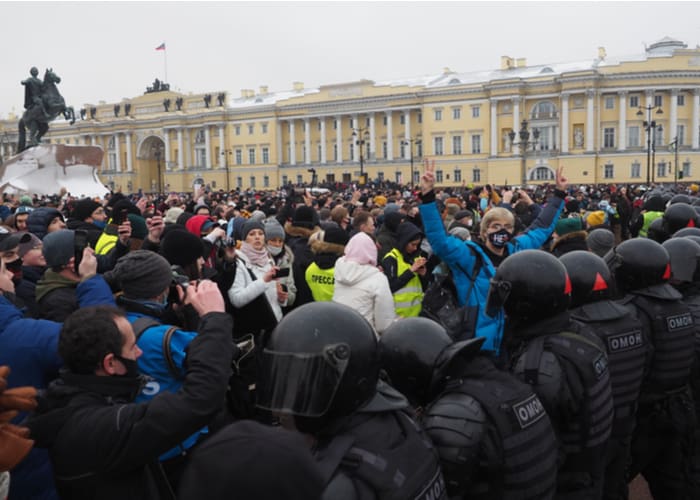 2021 protests in Saint Petersburg – known as Petrograd in 1917 when it was the centre of the Russian revolution.
Photo credit: Alexander Chizhenok / Shutterstock.com

As Russia entered the first of its revolutions in 1917 – events that would shape the world for the remainder of the twentieth century – the Daily Mail was stuck with the headline ‘NO NEWS FROM PETROGRAD YESTERDAY’. The news story which followed was barely 50 words, beginning, “Up to a late hour last night the Russian official report, which for many months has come to hand early, had not been received”. Known today as Saint Petersburg, Petrograd was Russia’s capital at the time and the centre of the revolution.

The writer’s frustration was plain. Russia’s provisional government had cut telegraph links with the rest of the world. News of the revolution had to wait.

My recent research involved print and broadcast archives; journalists’ memoirs; and a wide range of interviews with journalists who worked as Moscow correspondents from the 1950s to the present day. In my book, Assignment Moscow: Reporting on Russia from Lenin to Putin, I argued that, despite all the obstacles placed in their way, Moscow correspondents have generally served audiences well, and on occasion offered insights that have eluded policymakers, or even inspired their later conclusions.

The paper I presented at the recent Cardiff Future of Journalism Conference began with an assessment of the coverage of the revolution and considered key episodes of the Soviet period before moving to the present day.

Reporting during the Stalin era

The ‘Show Trials’ of the 1930s were used by the Soviet leader Josef Stalin to remove his contemporaries from the political scene – in some cases, by execution – and staged, in part, as a media event for all the world to see.

Here the correspondents’ insight seems to have directly influenced the later conclusions of Fitzroy Maclean, then a British diplomat in Moscow, and a man whose adventurous life has led to suggestions that he may have partly inspired the character of James Bond. Sections of his memoir Eastern Approaches (1949) on the Show Trials bear a close resemblance to parts of Malcolm Muggeridge’s news analysis, printed more than a decade earlier.

On the obtaining of confessions, Muggeridge wrote, “Many theories have been put forward to explain them – Tibetan drugs, hypnosis, the natural propensity of the Slav temperament towards self-abasement.”

Maclean suggested: “People had attributed the confessions of the accused to oriental drugs, or hypnotism, or the workings of the Slav soul.”

Muggeridge also noted that the prisoners were “kept in custody for months, sometimes on and off for years” and “constantly submitted to intensive cross-examination” – an experience, he argued, few people would be able to endure without becoming “unbalanced”.

“Most of the prisoners had been in prison for a year or eighteen months,” Maclean wrote. “During that time, they would have been cross-examined for days, for weeks, for months on end.”

Shifts during the wartime alliance

The terror of the Stalin period was followed by a wartime alliance between the Soviet Union and Britain and the United States. Correspondents found themselves in an era where ideological differences were played down in the struggle against Nazi Germany. The Cold War saw those tensions re-emerge – even if one Soviet leader was keen to engage personally.

I was fortunate enough to interview the late Robert Elphick (1930-2019), who remembered Nikita Khrushchev turning up at diplomatic social occasions, and making a point of talking to foreign correspondents. “He always liked to have a coterie of us about because he could talk to us and we could then report stuff and he would get kudos in the Politburo,” Elphick recalled.

It’s not easy to imagine President Vladimir Putin behaving in the same way. In the Putin era, poor political relations, combined with changes in technology, have presented a whole new set of challenges for UK and US reporters covering the world’s largest country.

Reporting on the pandemic has brought its own difficulties.

In April this year, The Journalist – the magazine of the National Union of Journalists in the UK, asked me to write about the experience of today’s Moscow correspondents.

“That’s where we, in particular, have felt the most pressure – in our reporting both of the development of the vaccine, and then its distribution around the world,” said one of those I spoke to, a news editor for a major international media organization. “In fact, on that latter subject, we have come under a good deal of official pressure.”

A foreign reporter based in Russia agreed. “The Russian authorities are increasingly sensitive to criticism on a wide range of topics, from the coronavirus pandemic to human rights.”

My paper in Cardiff concluded with an even more recent and troubling incident: the expulsion of the BBC Moscow correspondent Sarah Rainsford. The story of western correspondents in Moscow is the story of Russia’s relations with the West. The decision to ban Rainsford – a determined and dedicated journalist – from Moscow, shows just how poor those relations have become.

If you liked this story, you may also be interested in: Official Secrets Act: UK Government has a long history of suppressing journalism to hide its misdeeds

Dr James Rodgers is a Reader in International Journalism at City, University of London. He is the author of four books on Journalism and international affairs, the most recent of which is Assignment Moscow: Reporting on Russia from Lenin to Putin (2020). He is a former correspondent in Moscow, Brussels, and Gaza.
» Media and Politics, Recent, Specialist Journalism » ‘No News From Petrograd Yesterday’: historical...