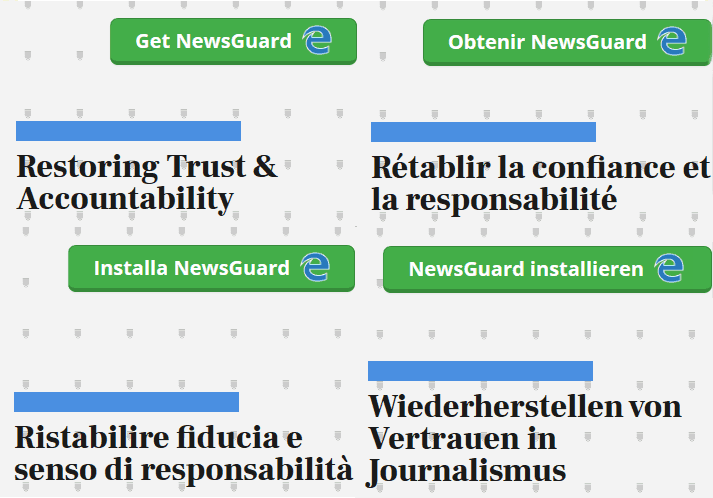 NewsGuard, the US media start-up launched in 2018 with the ambitious aim of providing news consumers with a reliable guide to the trustworthiness of any news website they might consider visiting, is gradually being rolled out across Europe.

EJO editors looked at how the NewsGuard browser extension has been received in those countries where the company has already assigned ratings to the majority of news websites.

NewsGuard’s analysts turned their attention to an initial batch of European countries in time for the European Parliament elections: first the UK (in April), followed in due course by Italy, Germany and France (in May).

By the time of the official rollout date in each country, NewsGuard aimed to have assessed the credibility of between 70% and 90% of news websites there.

Its teams of analysts do this by evaluating each site according to a set of nine quality criteria, five of which relate to content and editorial policy. The remaining four relate to transparency in areas such as ownership and potential conflicts of interest.

A score of 60 points (out of a possible hundred) is required for a website to be awarded a green rating. A site with a score lower than 60 points gets a red rating.

Each site is given a “nutrition label” – a write-up setting out in detail why the outlet has been given a particular rating and listing the sources consulted.

Its business model is based on the licensing of its site evaluations to platforms and search engines.

NewsGuard’s policy is to give websites the right of reply, both before and after publication of the nutrition labels. Its analysts raise any reservations they might have directly with the sites concerned, thus giving them the opportunity to respond and the chance to amend their practices. According to NewsGuard co-CEO Steve Brill, the nutrition labels are essentially a work-in-progress and the company’s editors make a point of engaging with the sites they’re assessing. “We’re journalists, we always call people for comment,” he told EJO.

Brill says that when making their initial evaluation, NewsGuard’s analysts generally give red ratings to an average of between 20% and 25% of sites in each media market. These scores are kept under review and several sites – including the UK’s Mail Online – have been upgraded to green after the outlet agreed to enter into a dialogue with NewsGuard over their rating.

“About a quarter of the websites that we’ve rated have changed one or more of their practices after engaging with our analyst in order to improve their journalistic practice, which of course we’re very happy with,” Brill’s fellow CEO Gordon Crovitz told EJO.

Updates to ratings are published on a regular basis on NewsGuard’s website.

Websites stuck with a red rating have perhaps predictably sought to discredit the whole enterprise.

Commentators for RT (formerly Russia Today) – whose English-language site at present fails in five categories and whose German-language site fails in six categories – have described it as a “censorship plug-in” and an “Orwellian browser plug-in”. 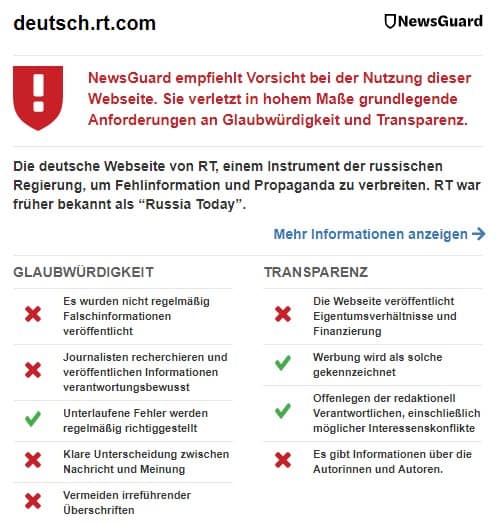 Reservations have also been expressed by outlets that have not done too badly out of NewsGuard’s ratings process.

A commentary published by the online magazine Slate – which achieved an exemplary score, passing in all nine categories – referred somewhat scathingly to the growth of a “trust industry”. Slate’s technology specialist, Will Oremus, noted that deciding who should be the final arbiter of source credibility was a vexed question, as “even the best-intentioned arbiters will be subject to their own biases and outside pressure”.

France’s Libération – which was assessed by NewsGuard as “generally maintaining basic standards of credibility and transparency” – also had some reservations over the project’s close links with the advertising industry, noting that one of the chief investors in the company was the giant French advertising group Publicis.

A number of senior journalists who have been recruited as advisers and editors by NewsGuard insist that the approach is totally even-handed.

Richard Sambrook, director of the Centre for Journalism at Cardiff University and senior adviser to NewsGuard in the UK, stressed the project’s apolitical nature.

“Although some casual allegations of political interference or bias have been made I have seen no evidence whatsoever and have full confidence in the independence and robustness of NewsGuard’s approach,” Sambrook told EJO.

And Chine Labbé, an analyst for NewsGuard’s French operation who previously worked for Reuters in Paris, told Libération: “We do not judge according to whether a site is right or left, pro-European or not. We do not care. But if there is a bias, it must be clear to the reader. The most important thing is transparency.”

A tool for readers

Angelo Paura, a member of the team responsible for assessing Italian websites, told EJO that the company’s approach to helping readers navigate their way through a sea of bewildering sources of information was badly needed in the Italian media market.

“NewsGuard is an essential tool for combating the record levels of misinformation in Italy. The country is a big target for Russian propaganda and more generally for bad actors wishing to spread anger and disinformation with the goal of dividing citizens and weakening democracy,” he said. “We are not a filter; we are a tool that gives readers context to better understand the sources of their news.”

Paura also echoed Brill’s point about NewsGuard’s journalistic approach and the advantage this represents over relying on algorithms to separate the wheat from the chaff. “We apply human intelligence to a problem that Silicon Valley’s artificial intelligence has failed to solve: the plague of misinformation and disinformation online,” he told EJO.

This approach has on the whole been appreciated by media experts in several European countries.

Matteo Scanni, the co-director of the Journalism School at Milan’s Università Cattolica, told EJO that NewsGuard’s strength lies in its reliance on the basic principles of journalism.

“Services like NewsGuard, which are based on forms of shared intelligence, can make a significant contribution to a debate that requires effort and constant vigilance. One of the most interesting aspects of NewsGuard is the news filtering system, which happens through the application of classic journalistic principles: newsroom meetings to establish which sites to map, in-depth assessment of their strengths and weaknesses and the application of nine reliability principles,” he said.

Several German commentators have expressed some doubt over the value of NewsGuard as a media literacy tool. Philipp Müller, a media scholar at Mannheim University, told Süddeutsche Zeitung that the project appeared to be based on the assumption that news consumers were incapable of judging the trustworthiness of websites for themselves, despite the fact that recent studies had shown that most readers are able to make a reasonably accurate assessment of the sites they visit.

No monopoly on truth

This point of view was echoed by Lena Frischlich, a researcher at the University of Münster specialising in the dissemination of propaganda online. Frischlich told EJO that there is evidence to suggest that “media users do not make such a bad job of assessing the credibility of alternative and established news sites”.

She conceded that NewsGuard’s methodology could provide a useful starting point for discussion in media literacy sessions in schools, though she stressed that its labels “can never and should never replace the reader’s own thinking”.

But the general consensus appears to be that NewsGuard’s browser extension can actually help to sharpen users’ critical faculties.

Christoph Neuberger, a communications specialist at Munich’s Ludwig Maximilian University, told the website of the public broadcaster Deutschlandfunk that while it is too much to expect one system to successfully eliminate the problem of online disinformation, in the case of NewsGuard “the transparency, the disclosure of criteria, and the fact that mistakes can be corrected can help users learn how to deal with news and to recognise that nobody on the Internet has a monopoly on the truth”.

If you liked this story, you may also be interested in Ethical, Trustworthy Journalism Central To The Future Of The News Industry