Newsrooms Should Prepare For Terror Attacks 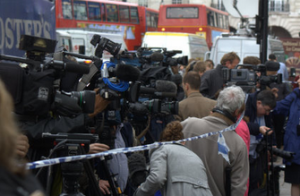 In the wake of terror attacks in Paris and Brussels, it is increasingly recognised that terrorism can affect news organisations close to home as well as in the field and that newsrooms should prepare to cover terrorist incidents.

Most news organisations are comfortable in making logistical and deployment plans and decisions. It’s what they do. They increasingly understand the risks of conflict reporting or the dangers of working in failed states and the need to provide appropriate staff training and support.

The needs of the newsroom

However, what is less often thought about are the needs of the newsroom and at headquarters. These range from an increasing awareness of vicarious trauma brought on by staff having to look at distressing images from social media or from conflict – and how they should be managed and supported – to the plans and support that senior managers should have in place.

Terrorism can affect news organisations directly – and when it does, the consequences reach far beyond the immediate physical ones.

In 2001, within days of me being appointed Director of BBC News, Irish terrorists planted a car bomb outside the BBC’s national newsroom which exploded and destroyed the heart of the BBC’s news operation. Thanks to a warning, no staff were injured – but the newsroom took months to be rebuilt.  As we had carried out extensive advance crisis planning we lost no core programme output.

In 2007 the BBC’s Gaza correspondent Alan Johnson was kidnapped.  The entire organisation was absorbed in efforts to publicise his plight and work to free him. This involved not just his editors and news staff but also the Director General who personally flew to the Middle East to negotiate with governments and other groups.

So terror in many forms can reach and disrupt the operations of news organisations far beyond the issues of reporting in the field. It is essential – as we move into an era where we can expect more terror on our doorsteps wherever we live – that news organisations recognise and plan for this.

So what is a crisis management plan?

It is a developed plan that anticipates some of the key decisions that may need to be taken, who will take them and who will be responsible for clearly allocated activities. Some of the key questions might include:

These are just a few of the initial and basic questions media organisations need to ask and work through in some detail if they become directly involved in the story. There are many more that need to be thought about and developed.

Crisis plans are an important element of good management – protecting the organisation and mitigating risk but just as importantly looking after the interests of staff as well. To that end they fall under the category of journalism safety as much as hostile environment training. We all hope it won’t happen. Many of us know that it can.


This article first appeared on the INSI site

Richard Sambrook is Professor of Journalism and Director of the Centre for Journalism at Cardiff School of Journalism, Media and Cultural Studies (Cardiff University). For 30 years, until February 2010, he was a BBC journalist and news executive. He spent ten years on the management board of the BBC becoming successively Director of BBC Sport, BBC News and, latterly, Director of BBC World Service and Global News. From 2010 until 2012 he was Global Vice Chairman and Chief Content Officer of the Edelman public relations agency.
» Media and Politics, Newsroom Management » Newsrooms Should Prepare For Terror Attacks