New research suggests that mobile journalism can be a more efficient method of interviewing people than traditional TV journalism. In a recent field experiment, a mobile journalist was able to persuade many more people to take part in vox pop interviews than a two-person TV crew.

As part of the research, I interviewed 11 experienced mobile journalists based in the United Kingdom, the Netherlands, Germany, Ireland, Australia, Qatar and Italy. All of the journalists agreed that mobile journalism allowed them to film stories that would have been impossible with a traditional TV camera and a multi-person crew. Most of the interviewees felt that people prefer to give interviews to a mobile journalist, either for psychological reasons or because the equipment is less intrusive.

To test the claim, I organised a field experiment in a shopping centre in Helsinki. The aim was to discover whether a mobile journalist could get more vox pop interviews than a two-person TV crew.

Altogether, 400 passers-by were approached in Kamppi shopping centre. The mobile journalist and the TV crew each approached 200 people over two days in February 2017. 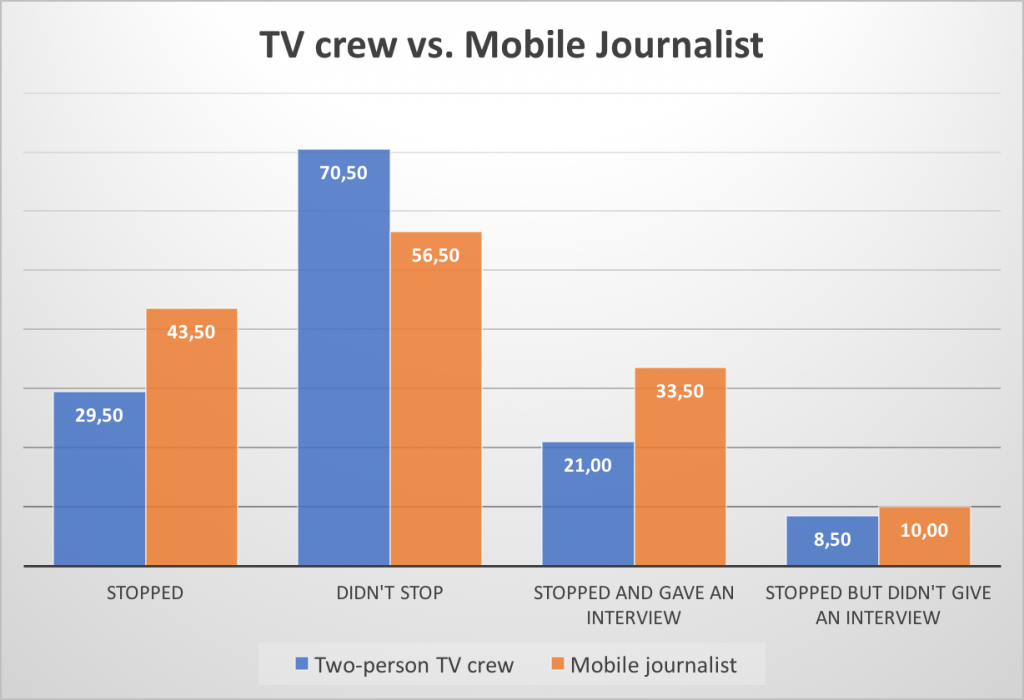 Passers-by were more likely to engage with the mobile journalist (orange) compared to the TV crew (blue).

Watch the video to see how the approaches were made.

Some of the participants were asked which interviewing method they preferred. One 23-year-old man said mobile journalism was the better method.

“If it’s a big camera, you might feel like you’re going to give some big thing or you’re going to be asked very serious questions. This is very familiar. We’re very familiar with mobile phones. We use them every day. So, it’s fine and it’s fun,” he said while standing in the front of the mobile journalist.

Another passer-by, a 26-year-old man, said the mobile journalist seemed more friendlier because he was alone: “Hard question. I haven’t encountered either of them so often. I can’t say… Perhaps I’d choose one person. There’s less pressure,” he said.

Although there were slight differences based on age and gender – mobile journalism proved a more effective method across all age groups and among males and females.

When the TV crew approached participants, 23% of people under 40 years-old and 19.47% of older people consented to be interviewed. When the mobile journalist tried to get comments he was more successful in both age groups: 39.81% of younger participants and 26.8% of older participants stopped and gave an interview.

However, when the sample is split into smaller groups, the margin of error and possibility of statistical bias increases.

Based on the field experiment, mobile journalism seems to be very efficient way to get vox pop interviews. However, it is worth mentioning that the results could vary in different kind of interviews or in different parts of the world. According to statistics, Finnish people are particularly keen on using smartphones.

In the experiment, some of the participants said, that they trusted “proper” TV crews more. The problem was also mentioned several times during interviews with professional mobile journalists for the study. Along with some technological disadvantages, credibility was one of the few downsides the experienced mobile journalists pointed out.

Closer to the Story? Accessibility and Mobile Journalism is available on the Reuters Institute’s website.

Panu Karhunen works as a news editor for the ISTV, the web TV platform of Ilta-Sanomat, Finland's biggest news site. As a news editor at ISTV he has developed daily news videos, live broadcasts and off-site-videos on different social media channels.Panu started his career as a journalist in 2001. Since 2002 he has worked as a reporter and news editor for different newspapers in the Sanoma Company, mostly for Ilta-Sanomat. He has experience of both printed newspapers and digital news sites.
» Digital News, Ethics and Quality, Latest stories » Research: Do Mobile Journalists Get More...