Difficult Times At The Guardian? Editorial Cuts And Job Losses 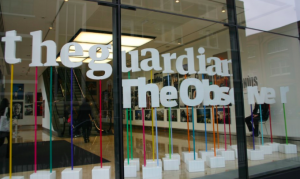 The Guardian newspaper is facing editorial cuts and job losses due to a slowdown in advertising sales – both print and online – according to an internal email written by David Pemsel, Guardian Media Group’s (GMG) new chief executive.

“This is shaping up to be one of the most difficult … periods we’ve faced in many years,” Pemsel wrote, adding that spending had “migrated to the likes of Facebook and Google at a far faster rate than previously seen.”

The email, which was leaked to Politico warned of cuts across the newspaper, including spending on new hires, salaries, travel and other expenses.  Staff numbers will also need to be reduced, according to Guardian insiders.

Pemsel became chief executive at GMG earlier this year when Katharine Viner took over as editor-in-chief from Alan Rusbridger.  Viner and Pemsel are struggling with a problem facing all newspapers: earning enough money from digital products to cover losses from print.

This year has been “incredibly challenging” for all the major legacy media organisations, Pemsel said, with print advertising falling at an ‘alarming rate’.

He predicted that across Fleet Street, print advertising will be down by about 20 percent. Circulations are also falling.

Advertising revenues at the Daily Mail and Mail on Sunday fell £7m, or 15%, in the three months to the end of June. Although their digital counterpart, Mail Online, recorded an 8% increase in advertising turnover, it was not enough to offset the print decline.

Telegraph Media Group (TMG), owner of The Telegraph and Sunday Telegraph newspapers – among the most profitable on Fleet Street, also reported falling advertising revenue and circulations in the year to 2015. It has cut editorial costs, including more than 100 staff, over the past 18 months, but has continued to invest in its digital operation.

The Guardian has expanded more ambitiously online than many of its rivals and now generates about 40% of its income from digital, so was less exposed to a dip in print revenue. But online advertising has also slowed, as advertisers spend their money on companies like Google and Facebook, Pemsel said.

Guardian Media Group currently has cash reserves of £840m and reported underlying losses in the year to the end of March 2015 of £19.1m on revenue of £214.6m. Those reserves could grow above £1bn when it sells its share in Top Right Group.

But Pemsel warned that these reserves are “finite and modest by some standards”.

He said: “We must, as a result, maintain strict control on costs and be more disciplined on spending. We must continue to close the gap between the likely slowdown in our revenue growth, experienced by all in our industry, and the outflow of costs which we can and must control. This will inevitably impact recruitment, pay, travel and expenses, and will require each of us to play our part.

“We must, in other words, do everything we can to balance the books. By doing so, we will create some financial room to manoeuvre, which will – in turn – enable us to continue investing in areas of growth,” Pemsel wrote in his memo.

Caroline Lees is the Head of Communications at the Reuters Institute for the Study of Journalism. She is the former editor of the European Journalism Observatory’s English language site. She is a British journalist and has worked for The Sunday Times, London, for seven years including time spent in Delhi as South Asia Correspondent and as a news reporter and arts correspondent. She has also worked as foreign editor and assistant editor of The Scotsman, and for the Economist and Telegraph Media Group.
» Business Models, Media Economics » Difficult Times At The Guardian? Editorial...