Populism, platforms and podcasting: some key themes in the Digital News Report 2019 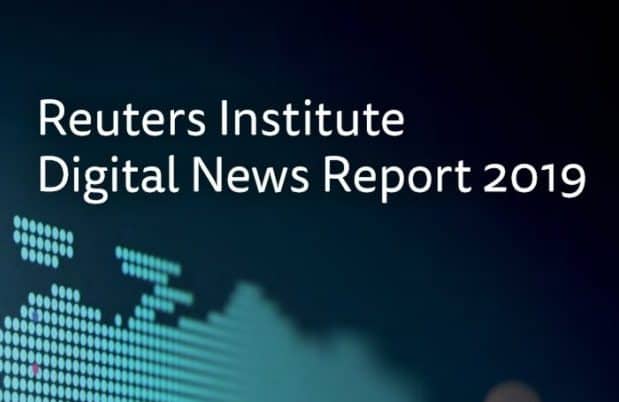 This year’s Digital News Report focuses on themes that are of crucial importance for the future of journalism and the media: the impact of populism, the role played by the big tech platforms and their efforts to build public trust in information available online, and the evolution of online business models. It also looks at the shift to private messaging apps and the rise of podcasts – among many other topics.

The report, which was launched last week by the Reuters Institute for the Study of Journalism, contains new insights about digital news consumption based on a YouGov survey of over 75,000 online news consumers in 38 countries and six continents. It remains the most authoritative study of its kind.

In his Executive Summary, lead author Nic Newman notes that the 2019 report “comes against the backdrop of rising populism, political and economic instability, along with intensifying concerns about giant tech companies and their impact on society.”

Newman says that while news organisations have taken the lead in reporting these trends, they have also been challenged by them, with the result that an industry reeling from more than a decade of digital disruption has been further depressed.

Platform power – and the ruthless efficiency of the platforms’ advertising operations – has undermined news business models, contributing to a series of recent high-profile layoffs in traditional (Gannett) and digital media (Mic, BuzzFeed).

According to Newman, “political polarisation has encouraged the growth of partisan agendas online, which together with clickbait and various forms of misinformation is helping to further undermine trust in media – raising new questions about how to deliver balanced and fair reporting in the digital age.”

Against this background of continuing instability, the report identifies some real shifts of focus.

Amid all this frenetic change, the report notes that some are beginning to question whether the news media are still fulfilling their basic mission of holding powerful people to account and helping audiences understand the world around them.

This questioning takes the form of government inquiries in some countries into the sustainability of quality journalism. But it also comes from parts of the public who feel that the news media often fall short of what people expect from them.

Major upheavals such as th 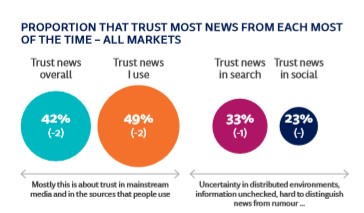 e Yellow Vests protests in France or Brexit in the UK have put a strain on the perceived impartiality of the news media, which in turn can affect trust.

Connected with the issue of trust and doubts over the quality and credibility of information sources, research into news consumption habits carried out for the report revealed that news avoidance is a growing phenomenon.

More people now say they actively avoid the news (32%) than when the same question was asked two years ago. Avoidance is up 6 percentage points overall and 11 points in the UK, driven by boredom, anger, or sadness over Brexit. People say they avoid the news because it has a negative effect on their mood (58%) or because they feel powerless to change events.

Other important findings to emerge from research carried out for the 2019 report include:

Further details on these developments – and much more – can be found in the complete 2019 report, which can be downloaded from the Digital News Report website here.