The Vatican: Coronavirus and the media 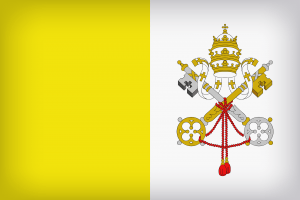 Journalists working for Vatican media outlets see it as their mission not only to provide factual information, but to cater for the spiritual needs of the faithful.

The first case of Covid-19 in the Vatican was confirmed on 6 March, and since then, Vatican Radio and its website Vatican News have been reporting on the outbreak in the smallest state in the world and providing information on measures taken by the Vatican authorities in response to it.

However, these reports on the situation in the Vatican City State account for only a small part of the Vatican’s coverage of the coronavirus crisis, due to the transnational and universal nature of Vatican reporting. This in turn is a consequence of the special structure of the Catholic Church – a centralised system which is at the same time divided into a worldwide network.

This structure is reflected in the Vatican’s own media operations. The Holy See’s information portal Vatican News offers news in dozens of languages produced by journalists from all over the world. In addition to the pronouncements and activities of the Pope and the Holy See, the content covers events in local churches worldwide and issues of global interest such as the environment, human rights and ethics.

In line with this universal approach, Vatican media have been examining the impact of the pandemic on countries throughout the world. Vatican News has looked at the effects of the crisis on social life and the practice of faith, and has explored the ethical questions raised by it. Vatican media have also been reporting on the pastoral support offered by Pope Francis in response to the global crisis.

Highlighting the impact on the disadvantaged

Special attention is being paid to the consequences of the crisis for minorities and marginalised groups, who are now more than ever dependent on aid. For example, Vatican News has been reporting on how coronavirus affects the homeless and refugees. It has also covered other areas in which large numbers of people are in a particularly vulnerable situation.

Vatican News reporting focuses on the relief work of the Vatican and Catholic humanitarian organisations such as Caritas. However, it has also highlighted the work of individuals and professional groups in the frontline of efforts to alleviate the consequences of the pandemic. These include medical staff, volunteers and priests who care for the sick and the bereaved, families and the elderly.

One group whose work is often overlooked, even in church media outlets, are nuns. In Italy – one of the countries most badly affected by the pandemic – members of religious orders daily risk their lives as they help to battle the coronavirus through their work in clinics and with vulnerable and isolated people.

Giving a voice to those affected

Vatican News has been reporting on the social consequences of the pandemic, for example its impact on families and workers. It has expanded its range of programmes in an effort to give more people the chance to talk about how it has affected them. For example, Vatican Radio’s Italian service has launched a new programme intended to give a voice to people engaged in combatting Covid-19. The programme also informs its listeners about solidarity initiatives and highlights the stories of victims of the pandemic. It has also carried a report on how the situation in many prisons is deteriorating as a result of the crisis.

Closeness at a time of social distancing

In a bid to reach all the faithful worldwide during the crisis, the Vatican is now broadcasting all early morning masses, Angelus prayers and General Audiences with the Pope in live stream and with live commentary in six languages: Italian, Portuguese, Spanish, German, English and French. Before the pandemic, Pope Francis’s morning masses were not live streamed, at least not in their entirety. This has now changed: the virus, which is forcing people throughout the world to keep their distance from each other, has prompted Vatican media to reach out more to the worldwide community – even if the closeness achieved is only a virtual one. At the daily morning masses, Pope Francis now offers spiritual support by asking for prayers for those whose lives have been affected by the virus.

The Pope’s masses and prayer initiatives in response to the crisis have increased interest in the Vatican’s media outlets. The Pope’s morning masses in the German-language live stream were watched by 50,000 users on social channels alone in the two weeks after the service was launched. The number of people connecting via Facebook, YouTube or the Vatican News website has more than doubled since the first few days of the service. And on top of this, yet more viewers and listeners are able to see and hear the masses when they are rebroadcast by Vatican News’s partner stations (both TV and radio).

You could say that the expanded live offer is in a very special way fulfilling the mission of the Vatican media. We journalists entrusted with carrying out this mission always try to bear in mind the fact that Vatican reporting is not only about news and disseminating information. It is also about pastoral care, hope and solidarity. It is underpinned by a strongly ethical dimension and by the conviction that especially in times of isolation and shutting down, shared values can help to build bridges. As well as upholding journalistic standards such as accuracy, impartiality and the need to represent a wide range of views, journalists working for the Vatican media recognise that at this time of crisis, people need not only to be given factual information, but for their fears and spiritual needs to be addressed.

Anne Preckel is a journalist with the German-language service of Vatican News / Vatican Radio.
» Ethics and Quality, Recent » The Vatican: Coronavirus and the media