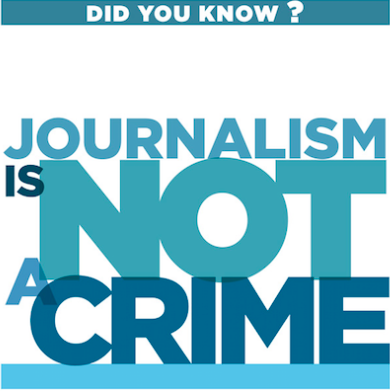 Just a few weeks later, many of those media no longer exist. Since the failed coup on July 15, more than 100 Turkish media outlets have been closed, their assets seized by the government.  Leading newspapers including Yarina Bakış, Özgür Düşünce, Meydan and Taraf, as well as the news site Haberdar and pro-Kurdish news agency DİHA have ceased publishing.

Press freedom in Turkey was being eroded long before the coup attempt. Journalists in the country have become used to threats, arrests and censorship with news outlets regularly blocked or closed by the government. The most recent press freedom index by Reporters Without Borders puts the country in 151st place, just below Tajikistan.

On the night of the attempted coup many Turkish media outlets took the government’s side and defied the military. Television channels continued their coverage, despite the military’s instructions to stop broadcasting. This allowed President Recep Tayyip Erdogan, and other members of the ruling party AKP, a platform; Erdogan also used Facetime to contact a CNN Türk presenter to call for national resistance on the streets.

Meanwhile, access to social media such as Twitter was blocked, but a short time later unblocked again, allowing the President to spread his message through that medium, as Efe Kerem Sozeri, an academic, writes in the online newspaper The Daily Dot.

More than a dozen news sites were blocked by the telecommunications regulator (TIB) the day after the coup attempt and within a week (July 20) Erdogan declared a three-month state of emergency, partially suspending the European Convention on Human Rights. These moves have allowed the government to rule by decree and pass bills that have the force of law. Decree number 688, signed by the President last week, allows any cabinet member to order the closure of any media organisation if he deems it a threat to national security.

In the past few weeks 16 television channels, 23 radio stations, three news agencies, 45 daily newspapers, 15 magazines and 29 publishing houses have been accused of links to the Gülen movement and closed down. Turkish preacher Fethullah Gülen, who lives in the US, has been accused of being behind the coup attempt. According to the Committee to Protect Journalists 48 online news articles have been censored in the last month, including one published in the UK’s Independent about Erdogan’s son.

The authorities have also issued warrants against 107 journalists, charged with “being a member of a terrorist organisation”, specifically the Gülenist Terror Organisation (Fetullahçı Terör Örgütü, FETÖ)..

P24, a local independent news platform, reports that 30 of these accused journalists have already been arrested. Their names were published by pro-government media and by AKP followers on Twitter. Among the detained journalists was Bülent Mumay, a longtime employee of the country’s biggest newspaper Hürriyet. Mumay was fired at the end of 2015 under pressure from the AKP government. Since then, he has worked at a university and as a freelance writer for various media, including German media.

Mumay announced on Twitter that he would report to the police station, but was arrested before he had a chance to do so. He also shared a photo of his Turkish Journalists’ Association membership card, writing: “This is the only organisation that I’m a member of.” Mumay was released after four days in detention, although most of the other 30 detained journalists are still being investigated by the prosecutor.

A number of Kurdish journalists, whose names did not appear on the government’s list, have also been arrested. One, Zehra Dogan, from the women’s news agency Jinha, was accused of being a member of a “terrorist organisation”. A few days later  Zeynel Abidin Bulut, a journalist with the main Kurdish daily newspaper Azadiya Welat, was detained.

Hülya Karakaya, editor of the magazine Özgür Halk, was arrested at Diyarbakır airport.  Mehmet Arslan, a reporter for Dicle News Agency (DİHA) and Nizamettin Yılmaz (and his wife), a distributor for Özgür Gündem and Azadiya Welat, daily Kurdish newspapers published in Turkey, were also detained on the same day. Access to the pro-Kurdish news agency DIHA was banned for the 43th time this year, access to the pro-Kurdish women’s news agency JİNHA was also banned.

According to the journalists union, DİSK Basın-İş, at least 64 media and publishing house workers have been arrested since the coup attempt and the Directorate General of Press and Information has cancelled the press cards of 330 journalists.

Since July 15, more than 60,000 civil servants, judges, teachers, police officers and soldiers have been suspended from their posts. More than 1,500 university deans were asked to resign, hundreds of academics and scientists were dismissed.  Some of them were detained on the grounds of being members of the “terror organisation” FETÖ/PDY, without any evidence.

The raids against academics and journalists have become a witch hunt. The Committee to Protect Journalists points out that Turkish journalists should not have to pay the price for the military officers’ unlawful attempt to overthrow the government”.

People are still demonstrating in Turkey, but not only Erdogan supporters. CHP, the opposition party organised a pro-democracy rally, attended by supporters of all parties, on July 24 in Istanbul’s Taksim Square. Speaking at the rally, Kemal Kılıçdaroğlu, CHP chairman, repeatedly emphasised the dramatic situation facing press freedom. He warned against using the coup as an excuse for a ‘witch hunt’: “The state should not be governed by anger and revenge… Torture, ill treatment, oppression, intimidation would only bring the state down to the level of the coup plotters themselves. This should not be allowed,” he said.

Assoc. Prof. Ceren Sözeri is a faculty member at the Communications Department of Galatasaray University, Istanbul. She received her Ph.D. from Marmara University in 2009. She has published on political economy of the media in Turkey, ethical issues, discrimination and hate speech in traditional and online media.
» Media and Politics, Press Freedom, Recent » Turkey: 100 Media Outlets Closed, 30...