Ethical, Trustworthy Journalism Central To The Future Of The News Industry 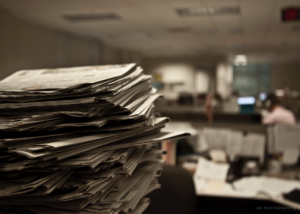 I do not know of any industry that has been through such an existential crisis as journalism has in the last decade or so. I spent over 20 years working in news and current affairs before joining the LSE nine years ago where my research has been largely about how the news media tries to discover a new business model. Ethics, as much as economics, will be central to that bright future. In the digital era it could be that other industries must also learn a similar lesson.

The whole process of journalism has been reconfigured. The means of gathering, creating and disseminating news has been changed by technological transformations that mean the way news is consumed and paid for have also been profoundly altered. We now have more smartphones than people in the world, connected to a global internet that allows citizens to access, share and create news for themselves. No longer gatekeepers, journalists and the news organisations they work for find themselves as nodes and channels within a networked information framework where new digital players such as Google, Facebook or Buzzfeed are arguably more significant than the BBC, CNN, or the New York Times.

Many ‘legacy’ news organisations are adapting rapidly to this fundamental challenge by introducing new work practices, platforms and sources of revenue. In the UK, The Guardian has chosen the ‘open’ model and seeks to build online volume by branding itself as the world’s liberal news provider with a range of products including breaking news, in-depth investigations, cookery workshops and a dating website. Buzzfeed funds its increasingly excellent journalism through sponsored content and kitten videos. While others such as The Times of London has chosen the subscription model plus a variety of services that it offers its community of readers.

But what about the ethics? What’s the value in that?

Take the current refugee crisis that is sweeping across Europe. It is a huge case study of the potential opportunity and the real challenges facing journalism as a business in the digital era. One photo of a dead boy on a beach seemed to act as a turning point for people’s awareness of this immensely important, complex and disturbing set of issues. Through social media that image leaped into the palm of people’s hands, appearing on their connected, interactive screens in the midst of their lives. They reacted to it even if it was just to ‘like’ it. Millions started campaigns with twitter hashtags in support of the migrants. Others have responded angrily, exploding with digital fury at the prospect of what they see as a threat to their way of life. What do professional journalists do in the face of this turmoil?

One response has been to thrust that image and all the other compelling, upsetting stories into the faces of readers and viewers. Newspapers that just a few weeks ago were warning of the dire consequences of mass immigration suddenly pleaded for compassion. Journalists who had been arguing that the west should remain aloof from intervention in the conflicts that have caused this rush to Europe’s shores are now saying that it is, in fact, our responsibility. The news cycle has never been faster thanks to the accelerant of 24/7 news channels combined with the stream of online news all trying desperately to keep up with the unpredictable, ever-shifting stream of social media. All this might leave the audience both exhausted and confused.

My case is that the best business response to this is that journalism must add value to this scenario of complexity and uncertainty. To do so involves ethics. Yes, absolutely journalists must be using all the new technologies. They must be on all the new platforms. Not just with their own websites and the big networks such as Facebook but in places like Snapchat and Instagram where people go in ever increasing numbers to find out what is happening in their world. But when they do this journalists must add ethical value.

First they must be there. Reporting from the ground is still vital. At the same time they must be tapping into the myriad online sources that surround any story as it happens. They must be able to do data journalism: to give real, reliable, information presented in accessible ways that describe events and issues accurately and in proportion. But they must also have empathy. The old idea of impartial, fact-based, balanced journalism is still entirely valid. But journalists must also understand the emotional element. They must have the empathy for the subject and the audience’s response to convey the human interest in any story. If they do this in a transparent way that seeks honestly to give a better account then they will be trusted. They must be humble enough to admit their mistakes and always to accept that they don’t know everything. If they get these ethics right, then people will value their work. They will build sustainable relationships of trust and relevance to the public. That is the best way to get people to pay for your work.

Increasingly, other businesses — not just media companies — are learning a similar lesson.

Building trust means having to work harder to give a service to the public, not just flog them a product. An ethical approach means you protect your brand from the battering that modern social media can hand out when your actions don’t align with your claimed values. Reputational risk is no longer a public relations issue, it is core to the business strategy.

This article first appeared in the LSE Business Review

Charlie Beckett is a professor in the London School of Economics Department of Media and Communications and director of the LSE’s journalism think-tank, Polis, as well as director of the LSE Truth, Trust and Technology Commission. He is on Twitter as @CharlieBeckett
» Ethics and Quality, Recent » Ethical, Trustworthy Journalism Central To The...