China: Coronavirus and the media 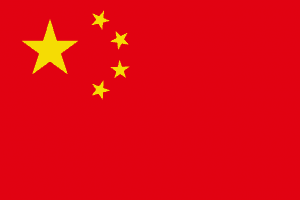 Several clear phases can be identified in the Chinese media’s response to the local epidemic that within a few months had metamorphosed into a global pandemic. The media have also focused on specific themes such as the different ways in which the Chinese authorities and authorities in the West have handled the situation.

December 2019: An “unknown pneumonia” in Wuhan

When patients suffering from fever and a previously unknown form of viral pneumonia began to present at hospitals in Wuhan in December 2019, it received almost no coverage in the Chinese news media. However, although the general public was not informed about the outbreak, doctors investigating it began to exchange information. Some of their findings were reported to the local health commission and at the same time began to be disseminated more widely via social media.

On 30 December, the Wuhan health commission sent an internal letter urging local hospitals to trace and report the “pneumonia with unknown etiology”. That evening, a social media storm was sparked off when Wuhan doctors including Li Wenliang posted messages in private WeChat groups about the return of a SARS-type virus. The following day, the Wuhan health commission officially announced that cases of an unknown pneumonia had been diagnosed in the city. From this point on, national media such as China Central Television and news organisations in other cities such as Beijing (Beijing News Newspaper) and Shanghai (Jiemian News) began to cover the story. 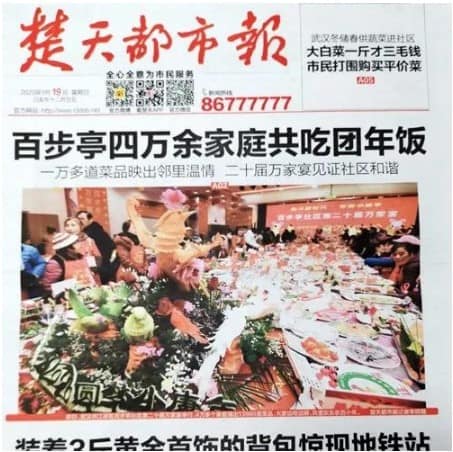 Weeks after the new coronavirus emerged in Wuhan, a local paper reported on a mass banquet held to welcome the Chinese New Year.

It was not until 6 January 2020 that the topic finally appeared on the front page of a best-selling Wuhan local newspaper, the Chutian Metropolitan Newspaper. The paper said that pneumonia due to SARS had been ruled out as the cause of “59 suspicious cases”. However, media attention waned when the Wuhan health commission reported no new cases between 11 and 16 January. The commission subsequently announced through media channels that the illness Covid-19 was caused by a new strain of coronavirus (“nuovo coronavirus”) but that there was “no significant evidence of people-to-people contact contagion”.

On 19 January, the Chutian Metropolitan Newspaper carried a report about a mass banquet for 40,000 families held in Wuhan on the previous day. This is an annual event intended to demonstrate community harmony in welcoming the Chinese New Year. It took place just a week before the New Year, when the Chunyun – the period during which Chinese people head home to celebrate the festival with their families, triggering the largest human migration on the planet involving over 3 billion passenger journeys – had already kicked off.

On 20 January, after the national health commission had carried out an investigation into the Wuhan outbreak, one of China’s most respected respiratory experts, Zhong Nanshan, confirmed in an interview carried by state broadcaster CCTV that the new coronavirus was highly contagious and could be spread via person-to-person transmission.

From then on, the Chinese media began to cover Covid-19 extensively. The mainstream media went into overdrive with positive and constructive coverage highlighting the effectiveness and sacrifice of the government and the people and insisting that efforts to combat the disease had united the whole of society. In addition to this positive focus, four other important elements of media coverage became apparent:

Maps showing the spread of the epidemic with numbers of cases reported in real time were published on various online platforms. Features of these epidemic maps include geographic location information enabling users to assess the real-time situation in their neighbourhood and avoid going to high-risk areas. Journalists also used data visualisations to demonstrate how Covid-19 was spreading from Wuhan to other parts of the country. For example, The Paper mapped 763 cases detected in early February and showed how they carried the virus from Wuhan to other parts of China before and after the city was put into lockdown on 23 January. DT Financial News visualised the data from a scientific paper based on an analysis of over 70,000 cases in order to help the general public understand the impact of factors such as age, gender and occupation (with medical staff being particularly vulnerable).

On 1 February, thirty-seven reporters from the Beijing-based Caixin Media, a leading producer of investigative journalism, published four detailed front-page stories taking a critical look at how the crisis was exacerbated by the local authorities’ reluctance to make information available promptly and a lack of resources such as testing kits in Wuhan in January. The critical reports published by Caixin and other investigative news outlets led to calls for the dismissal of senior members of the local government and health commission.

Because the first warning of the contagious nature of Covid-19 came from the respected figure of Zhong Nanshan, his words and those of other medical experts were regularly referenced in articles about the epidemic in China. Among the Chinese news items collected on the Factiva database between 20 January and 20 February, Zhong’s name alone appears 773 times, with 113 articles mentioning his name in the headline.

4. Social media as the main channel for publication

Almost all mainstream news media in China now have a “2W (WeChat & Weibo)+1A (App) model” for content distribution, with priority being given to mobile portals. This virtual network with more than 1.1 billion users prompted news organisations to respond to the growing demand for reliable information. It also prompted them to offer fact-checking services to counter the various kinds of coronavirus-related misinformation that began to circulate.

In addition, it provided both opinion leaders and private individuals with a platform on which they could share their views and personal stories. A good example of this is the “Wuhan Dairy” written by Fang Fang, a female writer who lived in the city throughout the lockdown. Fang’s diary, which is much more personal in tone than the reports carried by the mainstream media, attracted a daily readership of over 20 million on her WeChat public account.

At the same time, it stirred up a heated debate between liberal and nationalistic elements in Chinese society.

After the epicentre of Covid-19 shifted to Europe following confirmation of a cluster of cases in northern Italy on 21 February, Chinese news coverage of the disease also moved into a new phase. In addition to daily updates on and data analysis of the situation in various European countries, several other trends emerged in the coverage of the Chinese media:

1. Comparing China favourably with the West

The first thing about European countries’ handling of the pandemic that attracted criticism in the Chinese media was the fact that the wearing of face-masks was not universally adopted as a preventive measure. The Chinese media then went on to compare other differences in politics, constitutions and societies.

Experts giving their views on why it was not possible for Europe to apply the lessons learned from China’s “successful” experience in tackling the virus were widely quoted. Reasons put forward included the cumbersome nature of European policy making (as more time has to be allowed for negotiations and coordination), the fact that in Europe there is a greater emphasis on individual freedom than on the needs of society as a whole, etc.

There was even more scathing criticism of the US administration’s handling of the arrival of Covid-19 in the States. The Paper quoted one expert as saying that President Trump wasted valuable time by at first branding the outbreak as a strategy used by the Democrats to further their own political agenda.

Reporting on the situation of Chinese people living abroad was initially mostly sympathetic. But after members of the Chinese community in Europe began to return home in March and many of them tested positive for Covid-19, sympathy for them began to wane and concerns that they could trigger a second wave of virus transmission began to take precedence.

3. Does the world owe China a debt of gratitude?

On 4 March, Xinhua published an article from a financial expert’s WeChat public account headlined “The world owes China gratitude.” This was not the first article to hail the exemplary role played by the Chinese government in the global fight against Covid-19, but it appeals strongly to Chinese patriotic sentiments as part of a media campaign to overturn the perception that the coronavirus originated in China.

According to this interpretation of events, China made a great sacrifice (in January and February) and gained precious time to allow the rest of the world to prepare itself to combat the virus. This narrative also emphasizes that China continues to play an important part by providing support to other countries that have been severely affected by the virus.

This is an abridged version of a longer article by Zhan Zhang, the full text of which can be found here.

Zhan Zhang is a research fellow at the China Media Observatory, Institute of Media and Journalism (IMeG), Università della Svizzera italiana (USI). She is also the coordinator of USI's MSc in Media Management programme and the co-founder and international director of Europe-China Dialogue: Media and Communication Studies Summer School. Her key research and teaching areas include comparative media analysis, strategic communication, and the presence of China's hard-soft power in Europe.
» Ethics and Quality, Media and Politics, Recent » China: Coronavirus and the media