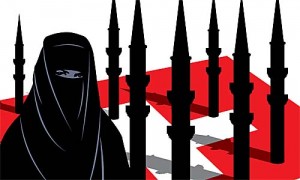 Austrians are all too familiar with the unfavorable media attention focused on their Swiss neighbors, for as the Austrians learned, once the electorate sheers obstreperously from the consensus of “political correctness“ on which political elites tend to agree, all hell breaks loose.

Larger neighboring countries descend on small ones, and the media’s buzz climbs to a roar. Reporters immediately become “experts” on the psyche and internal functions of adjacent nations, speculating wildly. As serious, comprehensive investigation costs time and money, many journalists opt  to recycle or plagiarize material published elsewhere.

This situation engulfed the Swiss after a large majority voted against the construction of minarets. Suddenly a problem, which, at core, is a question of building legislation and perhaps the aesthetics of urban architecture, is doctored into a question of human rights and religious freedom, as if Muslims in Switzerland were seriously prevented from practicing their religion, and as if in Mecca muezzins and ringing church bells would call in peaceful competition for the attention of believers.

A similar episode arose in Austria a few years ago, when Jörg Haider achieved surprising success in the federal election. At the time, Putin waged his war in Chechnya, laying waste to the entire country with hardly a disturbance. Meanwhile, members of the mass media were preoccupied with discrediting Austria. Today, Putin is still in power. And in Italy, EU-Europe is tolerating a prime minister who controls all major television channels and the majority of media outlets, reigns like a post-fascist, denigrates the supreme court and the president of the republic, and decrees laws which either protect him from prosecution or directly serve the interests of his media empire. Leaders of the European media aren’t necessarily suppressing such news stories, but they’re managing to acquiesce to them. At the very least, Italy’s government is escaping the scrutiny it should be enduring while instead, the mainstream media mobs Switzerland, the oldest, most direct democracy in Europe.