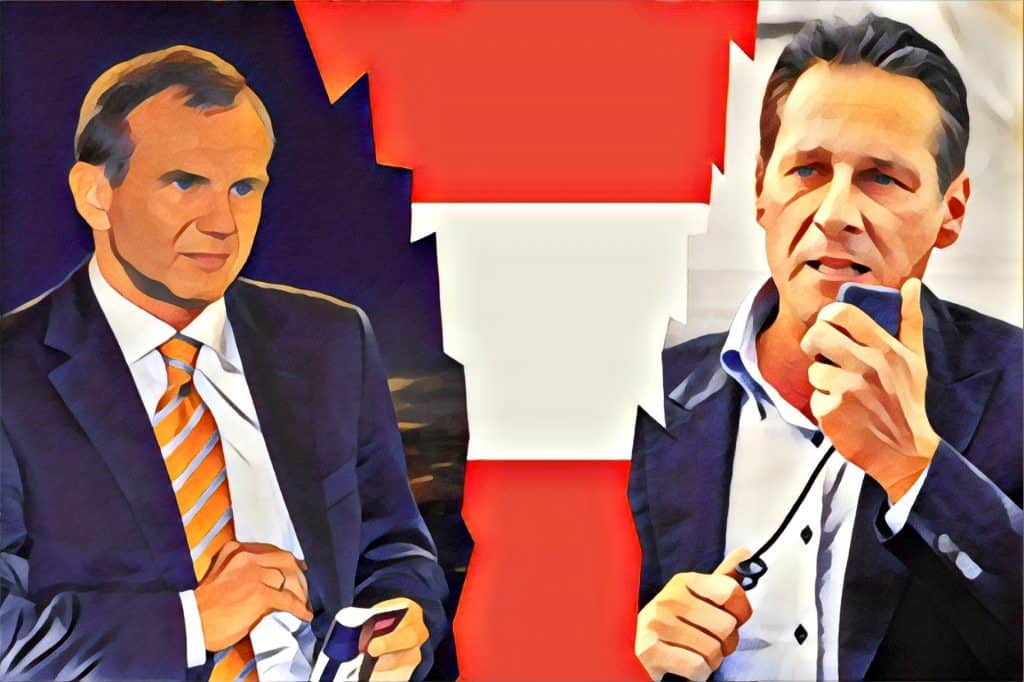 Austria’s far-right Freedom Party FPÖ has long had a fraught relationship with the press. Following the party’s rise to power as part of a right-wing conservative coalition after the Austrian election, this conflict has only intensified. Is the party waging a war against the press and independent journalism?

Judging from recent events, it wouldn’t be hard to get this impression. A few weeks ago, Austria’s public broadcaster ORF filed a lawsuit against the deputy head of the government, the FPÖ’s Heinz-Christian Strache. A couple of days earlier ORF news presenter Armin Wolf – one of the best-known faces on Austrian television – had brought his own lawsuit against Strache.

Satire? – How To Disguise Attacks On The Press

The reason? A Facebook post by the vice-chancellor in which he had posted a picture of Wolf with the words: “There is a place where lies become news. It’s the ORF”, mimicking an advertisement for the broadcaster. The post continues with the line: “The best of fake news, lies and propaganda, pseudo-culture and forced licensing fees. Regional and international. On TV, radio and the Facebook profile of Armin Wolf.” It was a brazen attack on the broadcaster and one of its most prominent figureheads. Unsurprisingly, the ORF immediately demanded an apology and issued a stern rebuttal.

“Vice-chancellor Strache accused ORF, by doctoring ORF advertising material, of spreading fake news, lies and propaganda in all its media,” ORF director general Alexander Wrabetz said in a brief statement, adding that the post “discredited the journalistic work of 800 ORF journalists” and was “libellous and damaging to [ORF’s] reputation”.

While Strache – who has since taken down the post, agreed on an out-of-court settlement with Wolf and apologised — has argued that his post was meant as satire and also labelled as such (with the one-word caption “Satire!”), the ORF is determined to uphold its suit against the country’s deputy head of government.

A War Against Austria’s Free Press

Strache’s post fits into a larger picture of continued attacks on the broadcaster and the press which the FPÖ accuses of having a left-wing bias – a claim which mirrors those of other right-wing populist parties in the rest of Europe. The FPÖ also wants to scrap the licensing fee which funds the ORF – a move which would most likely amount to a closure of the broadcaster. A similar initiative against the Swiss public broadcaster SRF recently collapsed after the country overwhelmingly voted in support of the licensing fee. In Switzerland, the campaign against the SRF was heavily supported by the SVP, the country’s right-wing populist FPÖ-equivalent.

Strache’s favourite medium for attacks on the press are his social media accounts. His Facebook site, as Austrian journalist Alexander Fanta has noted, is key to the Freedom Party’s influence as it allows Strache to sideline legacy media and reach supporters directly. A range of “independent” blogs and websites such as Unzensuriert.at (“Uncensored”) – often co-run by FPÖ staff or supporters – deliver further ammunition in the form of ideologically conform articles and commentary. Very much like in the case of Donald Trump, social media aids Strache in getting his and his party’s agenda into Austria’s mainstream media – leading to somewhat ironic situations whenever his complaints about legacy media and the ORF are reported on in the very same.

Yet, not all outlets are “at war” with Austria’s right-wing populists. As Bettina Figl and I have written in the past, Austria’s notorious tabloid press – most famously the Kronen Zeitung, Heute and Österreich – are powerful players in the national media landscape and have long developed strong ties to the Freedom Party. Especially the Kronen Zeitung, a tabloid with a strong right-wing nationalist stance, has benefitted from Strache (and vice versa) whose sharing of the tabloid’s articles has driven up the their traffic.

While legacy media and the public broadcaster are increasingly under fire from the right, some outlets clearly needn’t worry. As long as they publish pieces which fall in line with the FPÖ’s positions and help to push their populist agenda they can be sure of the benevolence of the new rulers in the Austrian parliament.

You may also be interested in Martina Topinkova’s “The Risks of Being An Investigative Journalist in Central Europe”.

Felix Simon is a journalist and researcher and a graduate of the University of Oxford’s Internet Institute (OII). He is the former acting editor of the European Journalism Observatory and works as a research assistant at the Reuters Institute for the Study of Journalism. His writing on tech, politics, and the media has appeared, amongst others, in the “Frankfurter Allgemeine Zeitung”, “Die Welt” and “Der Freitag”, the Swiss “NZZ” as well as in the “Telegraph” and “The New European”. He has published in journals such as “Journalism Studies” and “Transformative Works and Cultures”. His research focuses on political communication in the digital age, big data in politics and the entertainment industry, as well as the changing nature of journalism and the media in the 21st century. He also takes a side interest in populism and the future of disinformation. He tweets under @_FelixSimon_.
» Comment, Media and Politics, Press Freedom » Undermining Austria’s Press, One Post At...