Quiz: Could You Manage a Russian Media Company? 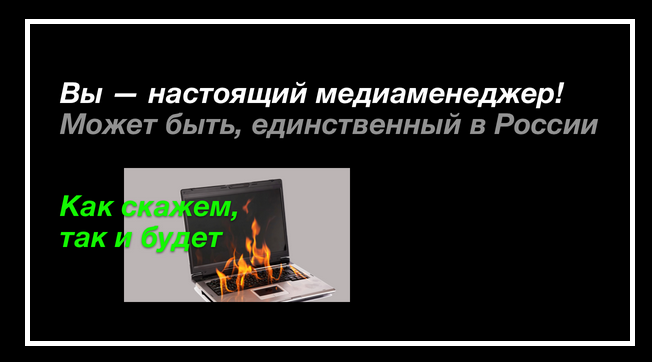 Lead the Media to Success: an interactive media management game on the Meduza news site.

Meduza, a Russian news website based in Latvia, is pioneering a new way to advertise.  Audiences are challenged to participate in a game in which they manage a hypothetical Russian media company. When players (almost inevitably) fail they are invited to a media management conference in Moscow, taking place at the end of this month.

Lead the media to success asks readers 11 questions about how they would launch, fund and manage a news site in Russia. The first is:

“Finally, you have a clear concept and minimal funding to open a news site. You can go ahead with the implementation and need journalists. What will you do?”

Multiple-choice answers include: a) hire journalism students and b) hire an experienced editor and let him build a team.

There is no correct answer. One reason the game is so challenging is that players compete with an algorithm, which recreates chance, good or bad. The algorithm decides whether, if you choose option b), you are lucky with the editor who builds a strong team, or whether you end up with an editor who only hires their friends, thereby risking the entire venture. 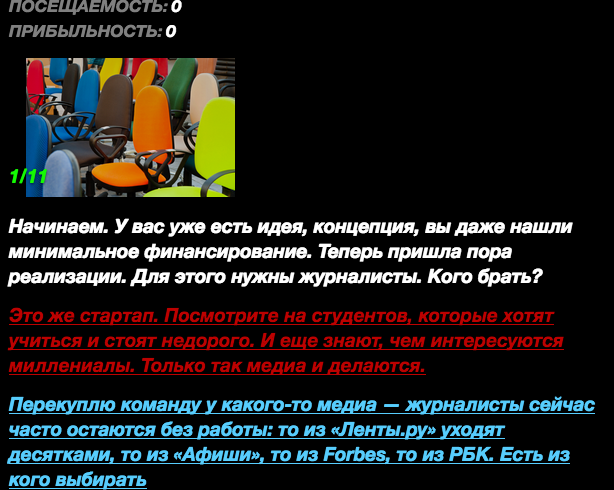 No answer is correct – players compete with an algorithm.

More complex questions include the topics of funding and politics, both sensitive areas in Russia’s media market. For example, if your hypothetical news site publishes material about a prominent anti-government figure you risk being viewed as supporting the opposition and fired from your job; immediately losing the game.

At the end of the game (which this writer failed miserably four times) Meduza informs the players that they are eligible to – and apparently need to – buy a ticket to the Storm conference, to be held in Moscow on 27 May.  Organised by Meduza’s parent company, SIA Meduza, and attended by speakers from the New York Times, Slate and Vox, Storm is aimed at Russian-speaking media professionals interested in the latest media trends.

Meduza, formed in 2014 by Galina Timchenko, the former editor of popular Moscow-based independent news site, Lenta.ru, after she was fired during a Russian government clampdown, has published games on its site for more than two years. Usually the games relate to news and are not connected to advertising. Their main goal appears to be to engage readers and publicise Meduza, through likes and shares.

The mayor of Moscow has announced plans to demolish more than 5000 of these buildings, which house thousands of Moscow residents. However, apartment owners object to plans to forcibly evict them. The plan recently provoked a mass protest in the city.

Other thematic games on Meduza’s site focus on a variety of topics, such as corruption (“How corrupt are you?”), knowledge of Russian language, journalistic ethics, fake news, Russian literature, etc.

What makes this particular game on media management unique is not only the effort to advertise an event, but also that it reflects Meduza’s early struggles.

To launch Meduza, Galina Timchenko moved her newly-formed editorial team from Moscow to Latvia, where they now operate from offices in Riga. In a 2015 interview with the EJO, Timchenko described some of the difficulties of starting a new site from scratch, from abroad. These included meeting the site’s financial goals, as well as audience expectations.

The media management game reflects these challenges. “We spent two weeks developing this game; 25 pages of plain text in Google doc are dedicated to it,” reads Meduza’s official Facebook page. “We input all our pain into this game, so that you understand the hopelessness of business.”

Nearly three years after its launch, Meduza now appears to have overcome the early challenges and, judging by audience figures, it is thriving. The site’s audience in the Russian language alone, according to its own reports, passed five million by the end of 2016. More than 200,000 follow the online news platform on Facebook.

2. O.K., so you have the editorial team, but that is not enough (surprise!). You need to develop and design the website. What should you do?
a) Hm, I will create it myself on WordPress.
b) Let’s hire a technical director and an art-director immediately.
c) Not a problem. I will go to Charmer Studio, they will prepare everything.
d) Levedev’s studio, of course!

3. Uff. Launched. But, somehow, no one is reading you!
a) So what? We will publish five or ten sensational news items, and everyone will start speaking about us. Traffic will follow.
b) Yeah, that’s a problem. But it’s fine, we will buy some traffic in the traffic-exchange systems. A bit embarrassing, but at least it will increase the number of visitors. Once it’s high enough, we will stop buying.
c) We need social media. We will actively post everywhere, starting from VKontakte to Odnoklassniki; We will buy traffic, if it is necessary.
d) We need to throw a party and invite the whole of Moscow to this party. Everyone will remember it.
e) We will start collaborating with other media on joint projects.

4. Now, you have traffic, but too little money. You approach advertisers, but they are a little cautious. That’s when an opposition politician comes to you (congratulations, you launched the website in a pre-election year). He even has a budget.
a) Great. Let him send the text. We will publish it with a note saying that it is advertising.
b) We can try. But we should be cautious…
c) No opposition on our platform. The investor will kill us.
d) The best option is to ban any political advertising at all.

5. Here comes the first scandal! Someone from your social media management team has offended a reader on your official Facebook page. A comment battle has started. The team has divided. Some think that you are being targeted on purpose and, even if you were wrong, you should never apologise. Others think it is the outlet’s mistake and you should apologise. While the team is arguing, the scandal is growing.
a) Whatever. People write all sorts of things.
b) This is an unpleasant scandal. We should apologise and forget about it.
c) Scandal is good! Finally everyone is talking about us! Of course, we won’t apologise.
d) Publicity is the most unpleasant thing of all. I don’t want to participate, but I will have to deal with it. So, we will respond to everyone, who is posting, in private messages.

6. Problems again. You have started to earn money. But soon you realise that you must pay your employees on time, while advertisers are making delays in money transactions. You have a payment gap – it’s time to pay your employees, but there is no money.
a) I will gather all my employees and tell them honestly what is happening. I will ask them to work a month without salary. Of course, we will pay them but not right now.
b) This is a catastrophe. We should change the business model. We should start a paywall, then money will arrive in time.
c) I should call the investor and convince him either to give more money or transfer next tranche.
d) We will have to lay people off. We are spending more than we can.

7. Finally you have published sensational material. A real investigation of real criminal acts of real politicians. The TV is silent, of course, but all internet outlets and newspapers are writing about it and referring to you. Alexei Navalnyy weighs in. This is success! There is only one problem. The investor calls you and in a fit of hysteria demands you take the publication down and fire the chief editor. When asked “why?” he says someone from Kremlin called him and he does not need any trouble.
a) O.K., calm down. Stop the hysteria. Now I will go to the investor and talk to him. Everything is solvable.
b) I will play confrontation. I will tell him that I am leaving if that is what he demands. The investor needs no more scandal at the moment.
c) Actually, there is a law about mass media, according to which the owner has no right to put pressure on the editorial team. Everything in the material we published is confirmed by documents.
d) I will tell the investor that this was a bummer and that next time we will not publish anything like this. Or at least we will inform him beforehand. I will talk to the chief editor, too. Very carefully. 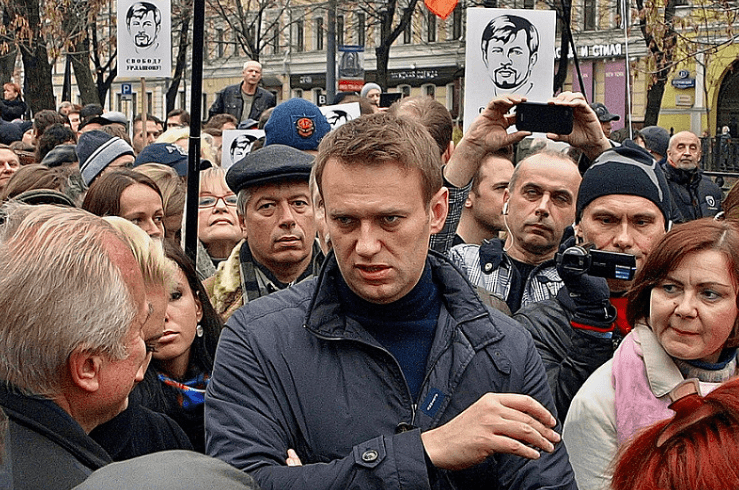 Everyone is talking about your site, including opposition politician, Alexei Navalny. What do you do next?

8. Looks like you are developing: You have readers, you have some advertising revenue, but still not as much as you would like. That’s when a new advertiser approached you. Not just a random one, but North Korea. That’s right! The Democratic People’s Republic of Korea! All of a sudden it has a lot of money (you wonder where it comes from). And they want to publish ten articles about the victorious Juche.
a) Advertising is advertising even in Korea. We are not responsible for this nonsense and we need money.
b) What?! No way! This is never going to be published in our outlet.
c) Look, there is always a solution. We will not glorify Juche in articles on our website, but we can put banner ads.

9. Look, what is this? A letter from Roskomnadzor! They demand you to delete a comment from your website within 24 hours. The comment, they claim, is extremist and states that Crimea is… Well, use your own logic to finish the thought of what Crimea is…
a) Damn, I am deleting it immediately and reporting the action to Roskomnadzor.
b) I will have to delete the comment, but, hell, I am going to outplay them in Twitter.
c) What the hell? What can they do? Ignore.

10. Looks like your team is tired. There are publications, and everything looks ok, but there are fewer ideas, the publications are boring, and everyone seems bored in general. Something needs to be done.
a) No need to do anything. Things like this happen. Sometimes they are tired, sometimes not.
b) Outrageous. Time to fire a couple of people demonstratively and everything will be back to normal.
c) We need team building. Let’s go out to nature or lock ourselves in with alcohol, and rethink the outlet.
d) I should act carefully. Talk to everyone eye-to-eye and create new goals and adventures for them. Things will start moving. 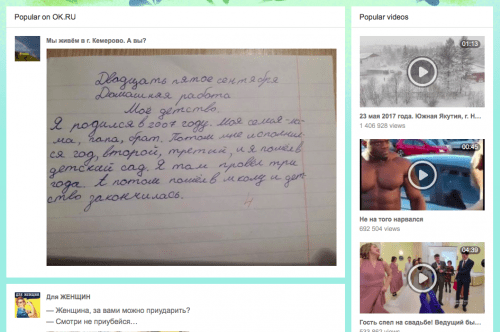 11. Well, you’ve reached question 11. That means that your outlet has been through a lot and survived – a rare case for Russia. Finally, you have an opportunity to expand. Where will you move?
a) Our tasks is to be everywhere. We will start our channels in Odnoklassniki, Viber, Telegram. We will develop apps for all platforms.
b) Video! In social media! Everyone is talking about this in America these days.
c) Podcasts. Radio is dying, and that’s when we enter the scene.
d) We will stand in the forefronts of the mobile revolution, like Sports.ru. We will launch tens of mobile apps for all possible occasions in life and turn into a digital outlet.
e) We will become an agency. We can create sites and write texts. We will find clients and do it for them for big money.
f) I am fed up with your media! I will sell my share and move to the sea. Good bye!

You may also like:  Reporting Russia: Censorship, Propaganda and Objectivity (EJO 2015)

Rukhshona Nazhmidinova's journalism experience includes working with as the Associated Press correspondent in Tajikistan (2003-2004) and assistant to the editor at the Central Asian Bureau of Agence France-Presse (2004-2006). Currently, she is working on her PhD dissertation at the Università della Svizzera Italiana. Her research interests include communication strategies via new media.
» Business Models, Ethics and Quality, Media and Politics, Media Economics, Short stories » Quiz: Could You Manage a Russian...