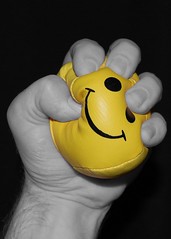 American cable television, with the exception of the Weather Channel, is stressful.

Venturing into U.S. cable news on a regular basis requires a certain level of mental preparation, at the very least a moderate yoga regime and a happy place. There’s a great deal of scoffing and shrieking, on occasion a blood vessel threatens to burst. It is, at times, not unlike watching a verbose precursor to a “meet me by the dumpsters” brawl.

When Democratic Congresswoman Gabrielle Giffords was shot in the head last Saturday in an Arizona shopping center, journalists far and wide linked the incident to America’s “toxic” political rhetoric. Sarah Palin’s tendency to employ gun imagery drew particular attention, largely in reference to a map placing crosshairs over Democratic districts on her Facebook page. MSNBC’s Keith Olbermann issued a warning on his show, saying, “We need to put the guns down. Just as importantly we need to put the gun metaphors away and permanently.” He then addressed Sarah Palin directly, explaining that if she did not “repudiate her own part, however tangential, in amplifying violence and violent imagery in American politics, she must be dismissed from politics.”

“Since the early days of 2009, I have warned your network and others in the media about the very real dangers of extreme anti-government rhetoric and the stoking of fear. I cautioned against Glenn Beck’s proclamation that he was a ‘progressive hunter’ and his statement that the government was full of vampires before he instructed his viewers to ‘drive a stake through the heart of the bloodsuckers.’ And against Palin revealing her 2010 ‘targets’ with a map showing gun sights over 20 congressional districts, including that of Rep. Gabrielle Giffords, urging followers to not ‘Retreat, Instead — RELOAD.’ I said on national television that inducing fear, anger, and the use of violent imagery creates a climate of fear, suspicion, and paranoia that could lead to another Oklahoma City.”

Brock goes on to urge Murdoch to either halt the use of violent rhetoric on Fox or to accept responsibility for the resultant climate and consequences. This notion of “accepting responsibility” expressed by Brock and other media figures seems only to serve as fodder for further argument, with some parties rushing to assign blame and others rushing to exonerate.

Given Fox’s track record, it’s unlikely that Murdoch would heed such a warning. Particularly because – let’s face it – media spats can be highly profitable. Caustic language and combative personas do wonders for ratings, and programs specializing in political theatrics and vitriolic confrontation draw the largest crowds. The contemporary media marketplace has no room for the Mr. Rogers and Bob Rosses of days past. They’ve been traded in for the likes of Bill O’Reilly.

While the Arizona tragedy may have ushered in calls to reduce irresponsible media behavior, to cool down language that effectively demonizes political opposition – and rightly so – it’s a leap to say these things caused a young man to shoot several people in front of a Tucson shopping mall.  A journalist’s function is to get at the “why” of a story. And that’s fine. But to insinuate knowledge or insight about motivation requires a level of intimacy no journalist shared with Jared Lee Loughner. Though inconvenient in a 24/7 news cycle, not every story wraps neatly into a news package. People are knotty, complicated creatures.

Still, if we could pin global warming, kidney stones, unemployment, H1N1, daylight savings time and stomach flu on Sarah Palin, that would be excellent. It just wouldn’t be journalism.

Kate Nacy is the first EJO Fellow to participate the European Journalism Fellowship program at the Freie Universität Berlin. Kate Nacy works as a journalist, writer and editor. Her work has appeared in news publications as well as in literary and arts journals. She served as the European Journalism Observatory’s English Web Editor from 2008 – 2012.
» Ethics and Quality » Everyone Breath