Could a stronger US public media system emerge in the wake of Covid-19?

In his latest book, Democracy Without Journalism: confronting the misinformation society, media scholar Victor Pickard argues that one solution for the crisis in journalism in the United States could be the creation of a government-supported but independent public broadcaster along the lines of various European models. He talked to Anya Schiffrin for EJO about how this might work.

Anya Schiffrin: Today journalists find themselves in a terrible position. They are essential workers but tens of thousands have been furloughed around the world. While news audiences have risen dramatically in 2020, the revenue crisis – particularly the shortage of advertising revenue that has plagued journalism since 2008 – has been transformed by Covid-19 into a possible “media extinction event”, as a recent study produced by BBC Media Action in cooperation with Luminate has warned.

The revenue crisis is hitting journalism very hard and killing off media outlets around the world. Botswanan journalist Ntibinyane Ntibinyane warned in April that all African newspapers are at risk of closure in the wake of Covid-19 and in early May there were layoffs at several major South African houses and a collapse in advertising in countries as diverse as Bolivia, UK, Philippines, Brazil, India, and Liberia, to name just a few. In this time of urgency, fresh thinking and large-scale solutions on how to save independent journalism and media diversity and pluralism are badly needed, even if there may not be the political will to implement them. 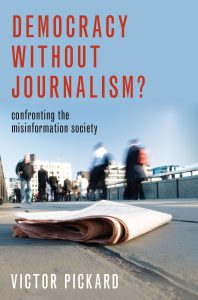 For these reasons, Democracy Without Journalism: confronting the misinformation society, the latest book by media scholar and historian Victor Pickard, is essential. In this thorough and authoritative book, Pickard proposes for the US something more along the lines of a European model with a government-supported but independent public broadcaster, taxes on the tech giants which would be used to support news, and subsidies for media outlets.

He also sees an important role for small communities to create their own outlets and for local news co-ops, and stresses the importance of journalists engaging with their audiences in under-covered areas. The hope is that by reducing commercial pressures on the media, quality will improve, which will ultimately help citizens be not just better informed but perhaps less politically polarized than they are today. Pickard is on the board of US media activism group Free Press and has been involved in policy debates in the US and other countries.

AS: In your book you talk about the importance of the public option for media and I wonder if the Covid-19 pandemic has given you any hope. It’s showed how important quality information is to societies but do you think it’s made the public option in the US more or less likely?

VP: In the short term the pandemic has raised awareness about journalism’s vital importance for society, especially during moments like now. Pre-pandemic polling data suggested that most Americans were unaware that local journalism was struggling, but now there’s a growing understanding that journalism is in crisis. New polling data shows that Americans are even willing to have the government subsidize journalism.

I don’t think these recent shifts will immediately lead to creating a “public option” for journalism, but already they’ve led to a modestly increased budget for public broadcasting. I think it’s likely that we’ll continue to move toward emergency funding for journalism. But it’s journalism’s post-pandemic future that we all need to consider – for there to be a future for most forms of local journalism will require structural reform and permanent public investments.

“The ongoing journalism crisis… could help set the stage for creating a stronger US public media system.”

In the long term, the ongoing journalism crisis – and the shifts in how we think about journalism – could help set the stage for creating a stronger US public media system, especially as local journalism continues to disappear. We also might see experiments at the local level such as municipal newspapers or state-level subsidies, which we already saw in New Jersey.

But a national system-wide public option will be required, which invariably raises several questions. First, how will we pay for it? I address this question in detail in my new book, but there are actually many ways: from taxing media and platform monopolies, to re-purposing already existing media subsidies, to deploying individual tax vouchers. I suggest the ballpark figure of a $30 billion annual public media fund is necessary. This is fairly modest compared to recent expenditures such as the stimulus bill or the earlier Trump tax cut.

A second question is how do we ensure it remains independent. Many democratic countries around the world have figured this out; I think we can too. Obviously, we need structural safeguards and firewalls between governments and media outlets. We need to democratize the system by devolving power from the federal level to state governments and on to local communities. And we should rely on independent advisory boards to help dictate resource allocation to the areas of greatest need such as news deserts and under-served communities.

Finally, how do we make sure that people will come to these media institutions once we build them? This is a daunting challenge, but there are early signs that suggest that if local communities are engaged – if they are involved with all levels of designing, governing, and producing their own media – they will trust and rely on their local media.

AS: Would it be possible to simply expand NPR [National Public Radio] or PBS [Public Broadcasting Service] instead of setting up a whole new structure?

VP: Expanding and re-purposing NPR and PBS is certainly one viable option. We’d have to clarify that these networks were no longer primarily broadcasting – that public broadcasting stations would become multimedia centers. This is already happening to some degree, but it still requires a psychological shift among Americans – especially policymakers – to erase the artificial distinctions between public broadcasting and other kinds of journalism.

What this transition would mean for incumbent newspapers is open-ended. Newspapers could be subsumed into a national network of public media outlets or they could remain outside of it as nonprofit or low-profit entities that collaborate with or mutually complement local public media. As much as I love newspapers, the concern has never been about saving them per se. It’s more about preserving journalism, and it just so happens that in most areas of the country newspapers are the last bastion of actual reporting.

“We will need to be creative in coming up with nonprofit options.”

There are clear advantages to building on the public broadcasting network instead of creating something new from scratch. We also could leverage other already-existing public infrastructures such as libraries, universities, and even post offices to provide spaces for local news production. Ultimately, we will need to be creative in coming up with nonprofit options, because commercial options alone cannot provide the local journalism that we need.

AS: What can we learn from other countries’ experiences as to the nuts and bolts of setting up something new? 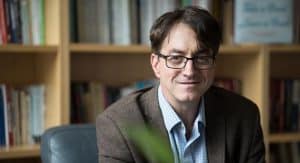 US media scholar Victor Pickard has written extensively on the future of journalism and global media activism.

VP: There are not a lot of new institutions being created anywhere at the moment, but many small-scale activist experiments are beginning to emerge. More generally, other democratic countries tend to be less in thrall to market fundamentalism, and therefore more likely to identify and respond to systemic market failures. This is one way we can learn from international best practices.

Other countries are moving more quickly towards subsidy models, especially for local journalism. They also are beginning to take on how platform monopolies such as Google and Facebook are depriving news outlets of their fair share of advertising revenue.

We also can learn from other countries’ experiences that this is a global journalism crisis. Sure, the crisis hit earlier and harder in the US for structural reasons, especially our over-reliance on advertising revenue compared to other countries’ newspaper industries. But commercial media systems around the world are grappling with many of the same structural problems. This tells us that systemic, structural reform is necessary.

AS: How would you deal with Facebook and WhatsApp and Twitter? I’ve been proposing voluntary guidelines so the tech companies could commit to providing newsfeeds of high-quality, diverse information. Are there other things they should be doing? Any thoughts on the copyright decisions in Australia and France? They seem like a ray of hope. Should other countries follow suit?

VP: I think that those recent decisions are generally good signs that democratic societies are beginning to rein in the platform monopolies for a number of social harms. However, I think it’s important that we don’t simply re-distribute advertising revenue back to the same incumbent commercial publishers that helped exacerbate the journalism crisis in the first place by disinvesting in their newsrooms and privileging profit over principle.

“It is about us, the broader public. It is about our ongoing struggle to achieve a democratic society.”

Instead of propping up failing commercial models or protecting the profit imperatives of threatened industries, I’ve advocated that we redistribute that money back to a public media fund that can focus on news deserts and other pressing social problems. Otherwise, we risk socializing costs and privatizing the wealth generated by what should be seen as public goods. In other words, this shouldn’t be about the poor Rupert Murdochs of the world. Rather, it is about us, the broader public. It is about our ongoing struggle to achieve a democratic society.

Media Capture: how money, digital platforms and governments control the news, edited by Anya Schiffrin, is due to be published next spring by Columbia University Press.

If you liked this story, you may also be interested in Six Simple Things Your Newsroom Can Do For Democracy.

Anya Schiffrin is a senior lecturer at Columbia University’s School of International and Public Affairs and director of the Technology, Media and Communications Specialization.
» Ethics and Quality, Media and Politics, Media Economics, Recent » Could a stronger US public media...