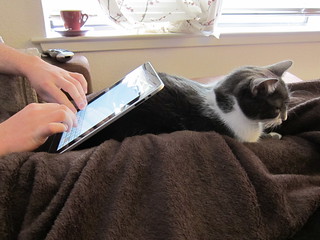 Could tablets be the long-awaited solution to the newspaper revenue crisis?

With new statistics showing that tablet usage promotes news consumption, establishing revenue streams via pay-per-view content is proving to be a difficult task for newspapers and publishing houses.

As part of a new study performed by The Pew Center’s Project for Excellence in Journalism (PEJ) in collaboration with The Economist Group, Amy Mitchell, Leah Christian, and Tom Rosenstiel analyzed news application users in an attempt to find solutions to recent industry decline.

The report, titled “The tablet revolution and what it means for the future of news,” is of interest to media managers due to the recent success of the iPad and its role in helping to increase news consumption. Tablets have enjoyed enthusiastic feedback from users, reaching a market penetration of 11 percent of the U.S. population in 2011.  As for the iPad’s most common uses, news consumption landed in second place, behind general Internet browsing.

Typically, tablet users are 30 to 40 years old, live in a higher income bracket, work full-time, and reported an increase in news consumption after acquiring a tablet device. Additionally, tablet users prefer reading and listening to news rather than watching, and are equally interested in headlines as they are in long articles.

Although tablet users are of interest to newspaper media managers, the most important consumers to study are those who pay for their news content. Of the 11 percent who own a tablet in the U.S., 53 percent consume news daily, 14 percent pay directly for news on tablets, and 23 percent pay indirectly via subscription to print newspapers. However, even as willingness to pay increases, payment amounts remain low and 83 percent of tablet users still cite gratuity as their primary reason for downloading applications.

Customers who pay for news applications are very similar to common tablet users. Referred to as power news consumers, these users are more politically liberal, have above average incomes and education, and are eager to learn and explore new media outlets. What makes these consumers so unique and attractive to media managers is their willingness to pay for applications and subscriptions.

The diffusion of innovation describes the market distribution of innovative products in a bell shaped curve (also called normal distribution), and divides the process into five distinct categories, each defined by a different type of consumer. Considering the recent introduction of the iPad and by taking a closer look at the “tablet power news consumers” described above, the latter corresponds very much to the early adopters profile with about 13.5 percent of individuals. This category consists mostly of individuals between the age of 30 and 40 with high education and income levels, as well as high leadership traits that often predict a product’s success while influencing consumers from the subsequent category. From the early adopters, follows the early majority, with about 34 percent of individuals.

This observation is of interest as it predicts an increase in diffusion and consumption of tablets and therefore an increase in paying news applications. Yet while early adopters are considered leaders and are willing to take risks, early majority consumers only invest in products they know, with reduced risk and lower prices.

While free distribution news has had a devastating impact on the market, the time has come for the industry to re-educate their readers about the value of quality journalism. By providing incentives for consumers to pay for something that has never before been free, branding and corporate communication strategies must cater to paying consumers.

The PEJ study was based on seven surveys compiled in the summer of 2011.  Five surveys were conducted by telephone with a sample of  5,014 adults over the age of 18, including 504 tablet users. For a better understanding of tablet usage at the level of news consumption and habits, two additional surveys were conducted via phone and an online panel extracted from a previous general public survey (40,000 adults), all in possession of a tablet.

Gladwell, Malcolm. 2000. The Tipping Point: How Little Things Can Make a Big Difference.