The Guardian: A 200-year old startup? 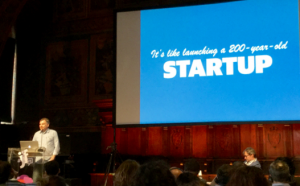 Even a major newspaper such as The Guardian has to struggle with the challenges of digital transformation, according to Aron Pilhofer, the newspaper’s recently-appointed Executive Editor of Digital.

It may be 200 years old, but Pilhofer said The Guardian now faces many of the same dilemmas as a startup. He described how the newspaper is completing its own transition into a completely digital-driven organisation, dealing with both economic and structural issues. “We’re not a media company which only does the news, we have to look ahead,” he said.

Pilhofer believes keeping “an open mind” is the key to solving many of the current problems facing journalism. A flexible approach will help to overcome old barriers and limitations, which no longer make sense in contemporary journalism, he added.

The Guardian’s London newsroom was reorganised in January, into four identifiable operational sectors covering the entire range of the newspaper’s activities: the “news desk” manages business, national and international news; “live desk” covers breaking news and live events; “visuals” deals with data projects, infographics and anything with a visual angle, while “audience” works to engage the readers and to manage social activities and interaction with the public – including data analysis. Paper and digital work closely together.

“We wanted a vertical structure which could also enable multidisciplinary approaches,” Pilhofer told an audience at this month’s International Journalism Festival in Perugia, Italy. In a talk, entitled, ‘It’s like launching a 200-year old start-up’ Philhofer said: “The idea of this reorganisation is to deliver every possible journalistic ambition we have.” He described multimedia and interactive projects, such as “Guantanamo Diary” or the motion graphic explanatory guide to Scotland’s independence referendum as examples.

Pilhofer believes the visual component of journalism is now a crucial factor in attracting and keeping readers’ attention. Video, in particular, is one of the most interesting fields of experimentation, he said.

Readers are crucial to the future of journalism

Readers are increasingly crucial to the journalism process too. “Journalism should be a conversation”, Pilhofer said. “We shouldn’t be shy in regards to our readers.”

GuardianWitness is a platform that allows readers to interact with the newsroom and where readers are invited to collaborate in journalistic projects: “we should do our journalism together with our readers,” said Pilhofer.

Another fundamental aspect of The Guardian’s digital development is analysing content consumption and reader behaviour.

“To put content on the homepage and pray for the best doesn’t work anymore,” Pilhofer said. Instead the newspaper studies the metrics of how readers move through content, to understand their behavior. Such data has helped the newspaper build a picture about what readers want to read, and what they ignore.

The newspaper uses Ophan, a software which enables journalists to receive information about traffic data for each story published on its site. Pilhofer said that these figures have not meant an endless diet of kitten stories at the paper, instead such data can spark “interesting conversations in your newsroom.”

“The future of journalism is a team sport”

Article translated from the original Italian by the author

Philip Di Salvo is a post-doctoral researcher based at the Institute of Media and Journalism of the Università della Svizzera italiana (USI) in Lugano. His main areas of research are whistleblowing, investigative journalism, internet surveillance and the relationship between journalism and hacking. At USI, he also teaches journalism at both the bachelor's and master's levels. Philip received his PhD in Communication Sciences from USI in 2018 with a dissertation on encrypted whistleblowing platforms in journalism. He is also a lecturer at Milan's Nuova Accademia di Belle Arti (NABA). As a freelance journalist, he writes about the social impact of technology for Wired, Motherboard/Vice, Esquire and other publications. Philip obtained a master's degree in Media Management from USI in 2012 and a bachelor's degree in Literature from Milan's Università degli Studi in 2010. He is the Italian editor of the European Journalism Observatory, based at the USI in Lugano.
» Digital News, Latest stories » The Guardian: A 200-year old startup?