Television is Dead: The Future Belongs to Social Media 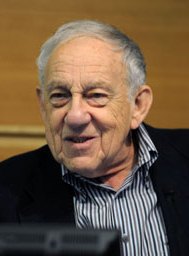 Q. Right now we are experiencing a very special and difficult time, from an economic point of view, and globally from a political point of view. What do you think are the major challenges for mass media and public communication?

Well, we are now at a time when new media have entered the scene so some combination of old media and new media are now cooking together. We see in country after country a scenario which we have seen before for example in Eastern Europe in 1989 with the fall of communism. We began to see this pattern of people coming out of their homes to mount major protests and fighting over control of the television station. And now it is more complicated.


I think the major effect of the media of mass communication, TV and newspaper was to move politics inside the home and thus to neutralize politics. Because you live with your furniture, with your wife and it is not a very political situation and people don’t tend to leave the TV set to get up, go outside to protest. But now with the new combination of new and old media I think people are being pushed outside by these new media. So that it is more like commuting between the home and the streets, the homes and the coffee shops where politics used to be.

Actually, there is a famous paper about the difference between Americans and Italians by two guys called Hallin and Paolo Mancini. They say Americans watch the news, even people who are addicted to the news drink a beer and go to sleep. They don’t do anything. Whereas Italian get angry, put on their coats, go to the piazza and from the piazza they go to the trade union headquarters or to the political party headquarters and say we have to do something. That’s sort of a story and maybe it is true.

But what I’m saying is that this combination of old media and new media now seems to be pushing people outside. So in the Middle East the pattern seems to be in Tunis where it started. Somebody puts himself on fire and then people get angry, then it’s on television, it’s on Al-Jazeera and then people begin to realize that they are not the only ones who are fed up with the regime. We have a concept in sociology that we call the “pluralistic ignorance” which means that I think I’m the only one and I can’t talk about it. It’s like ‘The Emporer’s New Clothes.’  I know that the Emperor is naked but I can’t say it, I know I’m homosexual but I think I’m the only one. And then something happens like the Kinsey report, and it makes people aware that there are lots of other people out there that think what they do, and then they feel empowered and try to do something. Where this ‘something’ will go is totally unclear. I mean, where it will go? Will there be this connection between the street and the political party and the parliament and the government or will they throw out the government and reintroduce some other regime which is equally no good and oppressive – this is a question.

Q: Do you think that this combination of old and new media that we are experiencing right now is a positive change?


Well I think it looks positive, at the beginning. But it is basically not so civilized. It returns to the pre-situation…of crowds, and crowds are not anybody’s ideal of democracy, certainly not violent crowds. So while we have some sympathies that finally somebody is rebelling, this is not the society I want to live in, not in the beginning, not in the middle and maybe not in the end.

Q: So this concept that the Web is a tool of democratization is exaggerated?

Probably it is exaggerated. We don’t know, but probably. It depends who controls it. What will happen afterward even if they can express their demands as they are doing now with the Occupy Wall Street movement which is pretty civilized, and it’s also that these crowds, these demonstrations are contagious. We see how it moved from Tunis to Egypt to Syria to Bahrain to Wall Street  or to Tel Aviv as well, and in each case people protesting are suspicious once the government has been convinced that it is serious, which takes some time because the government tends to dismiss it. And they think that they control the media, the weather will change and it will be over, But once the government tries to treat it seriously then the people who are protesting are very suspicious of the appointment of the committee to look into their demands. So it is not clear.

Q: Is it a must today for politicians to communicate through Internet and social media? Are they important tools for involving people and persuading them or does TV still play the major role?

I don’t think it is a good way in social media to get a serious message across, to get a slogan across. But Miss Merkel or Mr. Sarkozy are not going to succeed on social media.

Q: Going back to traditional political communication, isn’t there the risk somehow that when communication is so good, so persuasive, the expectations grow so much that sometimes we have the feeling that communication goes beyond the real content and substance or what a politician is really able to do and to be.

That’s always been true. A message is more sophisticated. Whether the message is as persuasive as you suggest is another question. I’m not a big believer in advertising. But some of my colleagues are. The claim is always beyond the ability of these politicians to deliver. Look at Obama, now he’s in big trouble even with his own supporters because he has not succeeded in anything except maybe foreign relations. But he has not succeeded economically, in the health plan, he has bad luck, let’s say…

Q: From the point of view of the people, of the public opinion, what do you think in this respect? We are increasingly bombarded with news and communication – will they learn to handle all this information, are they happy with this situation?

I don’t know if they are happy. Personally I think that television is dead or dying in the sense of the shared experience. It used to be the family sat down together and watched TV and they knew that their neighbors were doing the same and all of the world was doing the same. Media events were the main ceremonial events of the society, broadcast live, and everybody was watching. Now that it’s almost over, what we have are disruptive events like terror or disaster, like tsunami and war. So there are the things that bring people together. TV has become so decentralized that not everybody is watching the same thing at the same time. And I’m sure people are more cynical about media…

Q: Given all these big, big changes, what do you think are the major challenges right now in communication research? Are there some major topics that have not been investigated so far?

Yes, I think so. I think that the main emphasis will be on social networks. Through the media… it’s the generic problem I call diffusion, it is how things spread and how things spread in these messages, like the Obama social movements and so on,  but also what’s called data mining. Which is if I find that people are sending messages that include the word ‘flu’ in, let’s say, South Africa. So we see that the social media have the word flu in higher proportion than usual and if we know that South Africans are connected with Australians we can predict that the flu will next come to Australia. So that all business of social networks I think is the future and it might or might not contribute to democratization.

Natascha Fioretti is a research assistant at the University of Lugano. She's the EJO’s Italian Web Editor and coordinates and promotes EJO events. Bilingual in Italian and German, she earned a degree in Foreign Languages and Literature Studies at the Università Cattolica del Sacro Cuore di Milano and a Master’s degree in New Technology Enhanced Communication for Cultural Heritage obtained at the Università della Svizzera italiana. As a freelance journalist Natascha writes for a variety of print publications.
» Digital News » Television is Dead: The Future Belongs...