Attacks On The Press: How Technology Is Changing Censorship 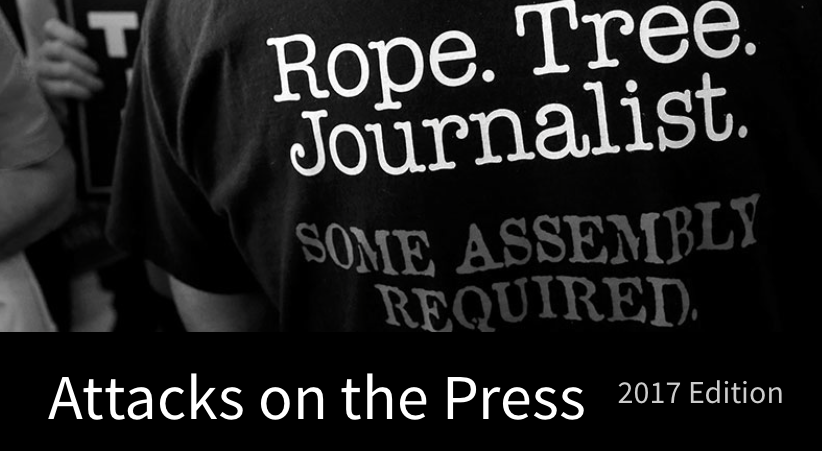 Attacks on the Press, 2017: 20 essays from around the world outlining the impact of technology on censorship.

Technology is transforming the way journalists work, but it is also changing the way governments are able to censor the media, according to Joel Simon, executive director of the Committee to Protect Journalists (CPJ).

Launching the 2017 edition of the CPJ’s annual publication, Attacks on the Press, in Oxford this week, Simon said that technology has enabled governments and non-state actors to “innovate around censorship”. This has led to the development of increasingly insidious and subtle methods of controlling media.

“New information technologies – the global, interconnected internet, ubiquitous social media platforms; smartphones with cameras were supposed to make censorship obsolete. Instead, they have just made it more complicated,” Simon argues in the book’s introduction.

Attacks on the Press, 2017, is a collection of articles subtitled: ‘The New Face of Censorship’. Its 20 chapters cover issues such as fiscal blackmail in Kenya, where the government uses advertising revenue to ensure newspapers remain uncritical; collusion between elements of Turkish media and the country’s authoritarian government; and the use of twitter bots and copyright laws to curb criticism on social media in Ecuador.

Controlling the internet and journalists

One article details how Russia has been inspired by the Chinese model of internet control. It describes how, until six years ago, Russia’s internet was an open and relatively uncontrolled space. However following 2011 anti-government protests, partly driven by social media, the Kremlin introduced new laws designed to block online content.

Another chapter, Discredited, examines the latest attempt to intimidate journalists by the Chinese government. It has drawn up plans to link journalists’ financial credibility to their online posts. This means a journalist whose posts are considered inflammatory or critical could face financial repercussions.

“A journalist whose social media post is deemed a ‘rumour’ by the government could see her credit score lowered, resulting in her being denied a loan or saddled with a high interest rate.”

The impact of ‘technology capture’

The book highlights a number of new threats to press freedom created by ‘technology capture’ – where technology that allows information to circulate is also used to stifle free expression. These include online harassment, the monitoring and surveilling of critics and deliberately sowing confusion and mistrust through propaganda and false news.

Other concerns include the gradual erosion of established protections, the targeting of journalists by terrorists to limit news coverage, the imprisonment of reporters and photographers who refuse to toe the official line, withholding access to officials and public documents and the wielding of financial leverage such as advertising and credit scores.

Twenty journalists and experts from around the world contributed to the book, including Christiane Amanpour, Karen Coates, Alexandra Ellerbeck, David Kaye and Alan Rusbridger. The writers expose nations that violate press freedom with impunity, provide potential guidance on how to ensure the safety of journalists and their sources, and also on how to fight against the powers that seek to silence criticism and call into question the media’s credibility.

Caroline Lees is the Head of Communications at the Reuters Institute for the Study of Journalism. She is the former editor of the European Journalism Observatory’s English language site. She is a British journalist and has worked for The Sunday Times, London, for seven years including time spent in Delhi as South Asia Correspondent and as a news reporter and arts correspondent. She has also worked as foreign editor and assistant editor of The Scotsman, and for the Economist and Telegraph Media Group.
» Censorship, Digital News, Short stories » Attacks On The Press: How Technology...