Ukrainian journalists are harnessing the techniques of gamification and visualisation and putting them to good use in their storytelling. 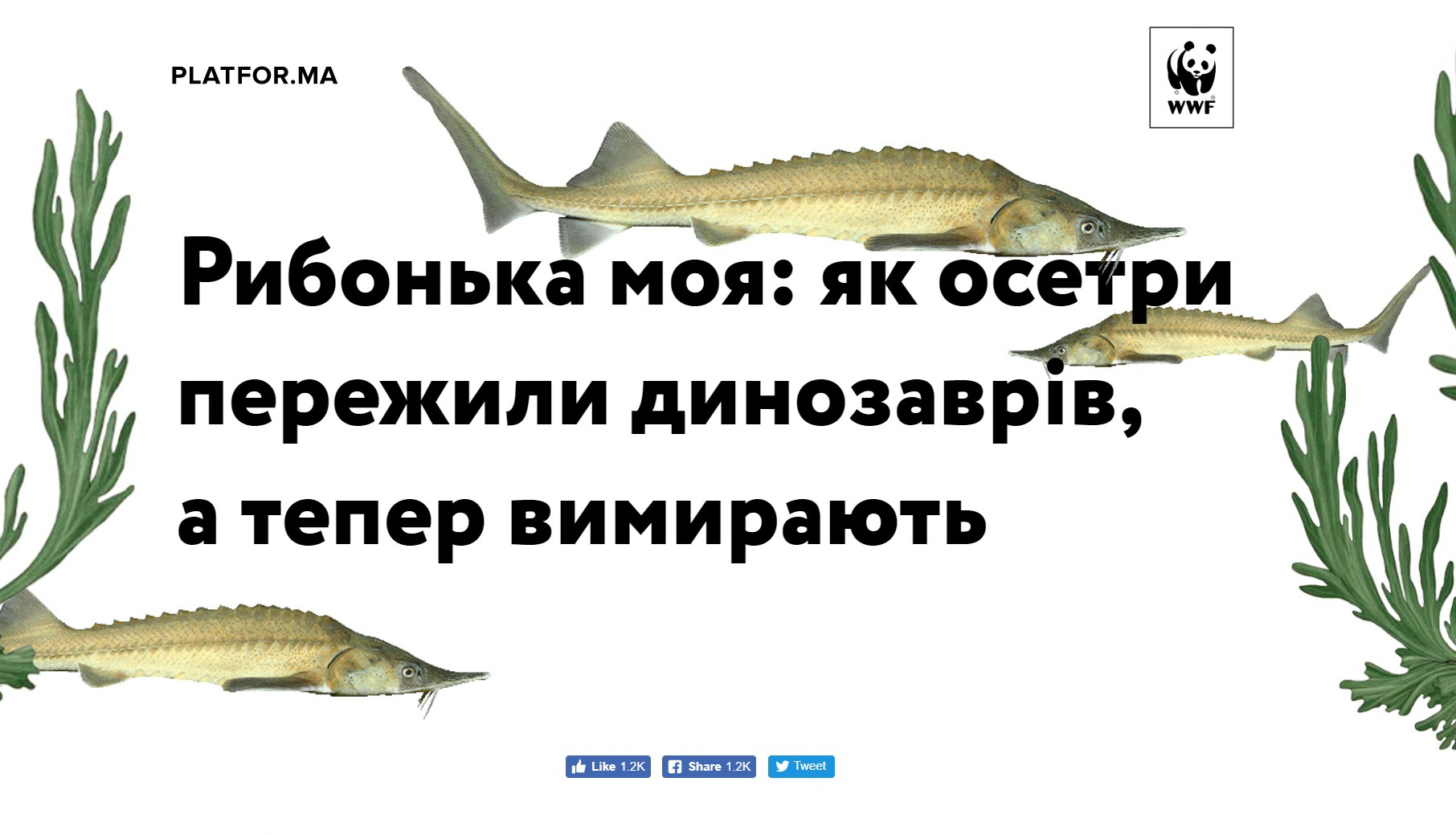 The creative use of images helps this Platfor.ma feature about sturgeon facing extinction make a strong impact

Journalists these days are faced with a bewildering choice of formats and multimedia tools: mobile journalism, longform journalism incorporating interactive elements and various audio formats are just a few of the special storytelling techniques available to us. But there can be a downside, as exemplified by the “shiny things syndrome,” in which an obsession with format and technological innovation leads us to lose sight of the meaning of the story itself.

However, some projects launched recently by Ukrainian media outlets show that drawing on techniques such as gamification and visualisation does not necessarily have to be a mere distraction but can also be an integral part of effective storytelling.

Gamification has become increasingly popular worldwide because it can be a useful tool that helps us to convey the subtleties of a story and present complicated things in a way that makes them easier to grasp.

Julia Salizhenko, Creative Director at the Ukrainian online magazine Platfor.ma, which seeks to inform its users on a wide range of topics, says that she and her colleagues started working with gamification techniques in 2014. Julia says that one of their first challenges was to get their readers to engage with complex issues such as the turbulent political events that were then taking place in the country. “We began experimenting with formats in storytelling… These days, most media incorporate GIFs into their articles, and offer games, quizzes and an unusual layout. We were among the pioneers then,” she told EJO. 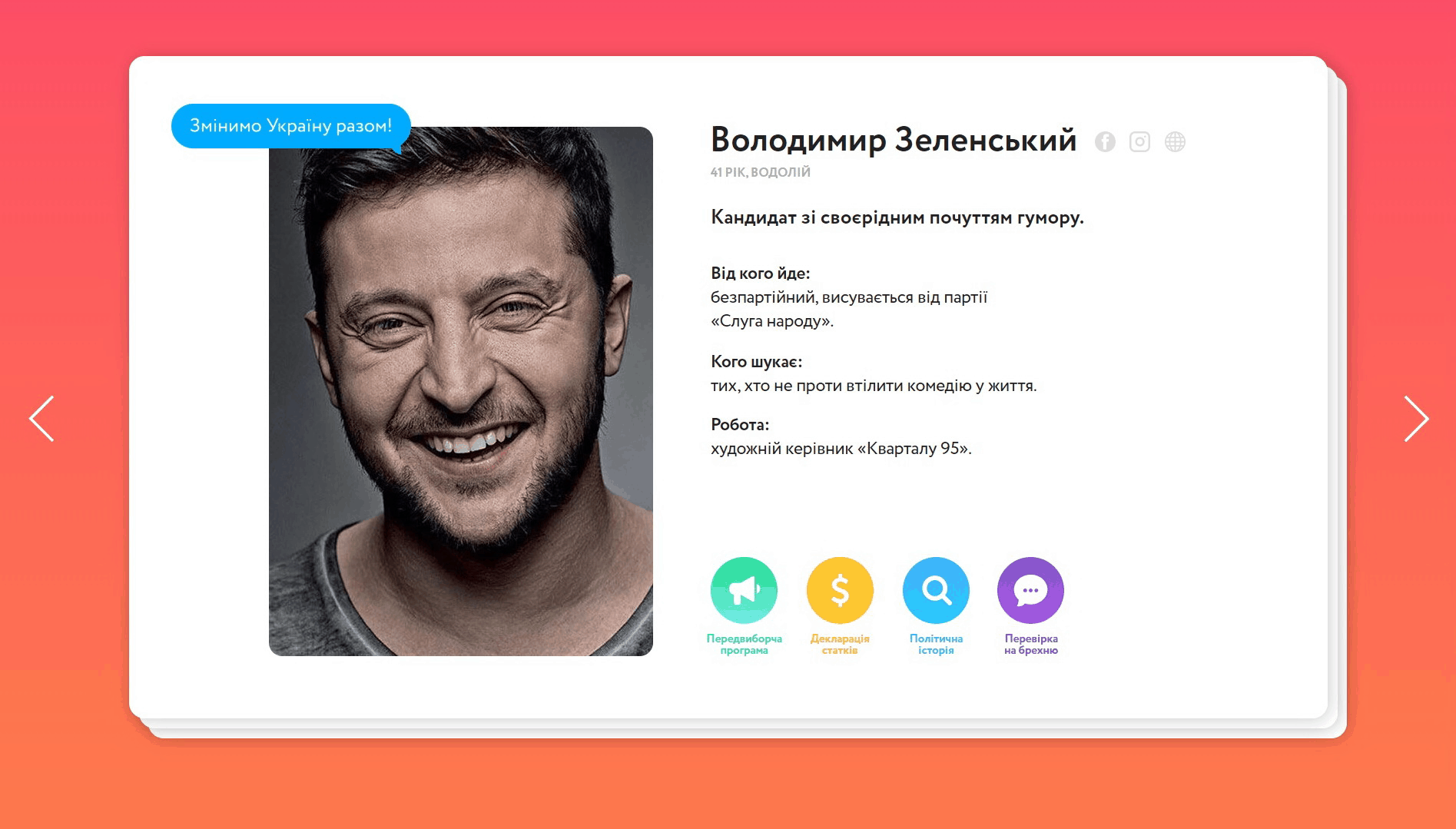 Platfor.ma created profiles of the presidential election candidates in the style of the dating app Tinder

In the run-up to this year’s presidential election, Platfor.ma launched a special feature under the heading “Politinder”, whose aim was to raise awareness of the candidates and what they claimed to offer the electorate. The feature aped the popular dating app Tinder, but instead of offering the user potential partners, it presented them with profiles of the main candidates.

Platfor.ma also aims to increase its users’ awareness of Ukrainian culture. The foremost Ukrainian poet, Taras Shevchenko, is seen by younger readers as a remote historical figure, and so the magazine decided to counter this image by creating “Shevchenkobot” — a chatbot that answers users’ questions in a witty manner, in the style of the poet himself.

Another Platfor.ma project presents the history of the country in the style of a Facebook newsfeed.

Salizhenko warns against the overuse of gamification techniques, arguing that interactive games and quizzes should not be included purely as clickbait. “Think about which medium and format are best for telling the story. Some examples of the use of certain techniques are good, but many of them look like a wig stuck on a cow,” she says.

She advises journalists who are considering incorporating gamification elements to put themselves in the readers’ shoes first. “How they will respond to your story?” she asks.

“The job of a journalist is to deliver an important message, not just to admire the ability to embed gifs or games,” she adds.

The visual aspect of a story is also becoming increasingly important, and Ukrainian journalists are finding new ways to make images an essential part of telling the story.

Marichka Paplauskaite, the editor-in-chief and co-founder of the photo-reportage outlet Reporters, insists that in this genre, the images are just as important as text. Paplauskaite told EJO that what sets Reporters apart is its emphasis on what could be described as “literary reporting” — marrying journalism with a more literary style of storytelling. She adds that this kind of reporting is already well established in Poland, but is just beginning to take root in Ukraine, where its emergence has been like a breath of fresh air. 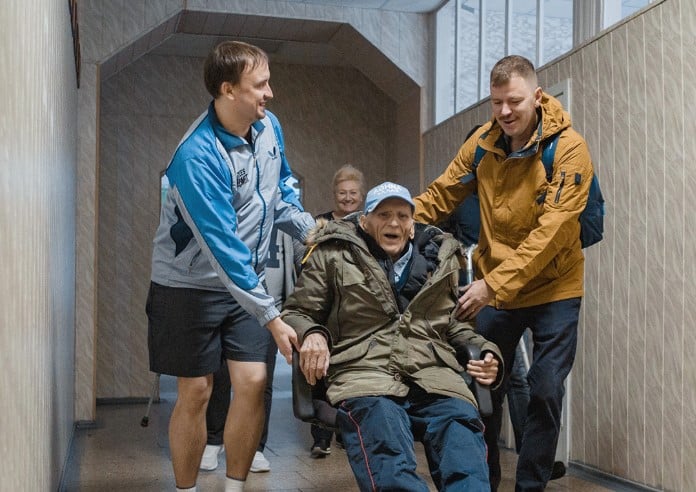 “From the very beginning we didn’t want the images to be just an illustration. We wanted them to be stories in their own right. We never just lift photos from social media or from open-source online picture libraries. They are all created specifically for this purpose,” Paplauskaite says.

She gives as an example a recent feature about a 85-year-old retired physical education teacher, Andriy Bykov, who has been an inspiration to generations of students. When Reporters photo editor Danylo Pavlov went to see Bykov, some of his former students were wheeling him around their old school in an office chair. “The text itself was strong and expressive,” Paplauskaite says. “But the photos convey emotion and form the backbone of the plot.” The Reporters approach is to ensure that all stories feature the three “Cs” (character, challenge, change) and clear plotting helps these elements to complement each other. 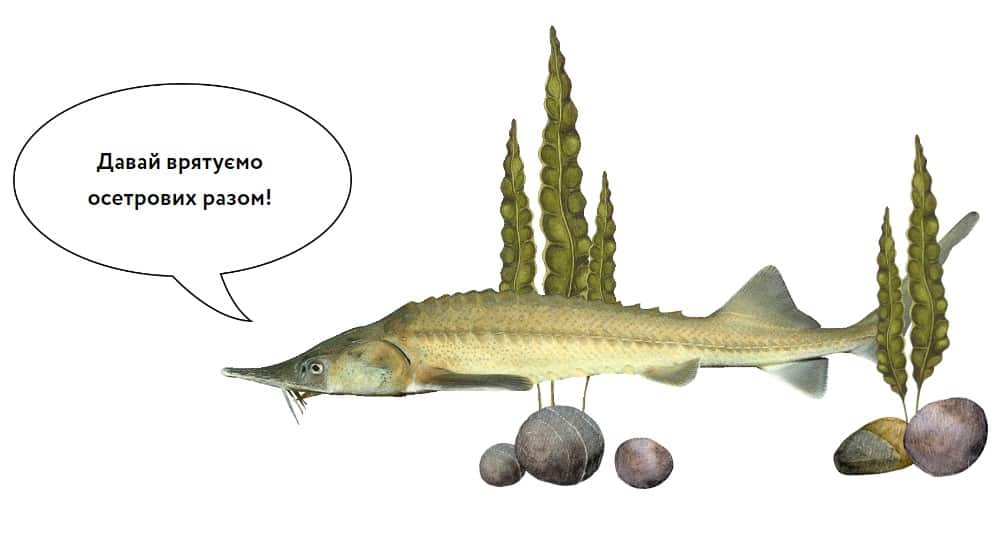 “Let’s save the sturgeon!” – Platfor.ma’s images may be playful, but they still deliver a powerful message

Another example of the creative use of the visual element is provided by an interactive feature produced by Platfor.ma about the threat to the survival of the sturgeon and what people can do to save this species of fish from extinction. In this feature, created in collaboration with the World Wide Fund for Nature, the Platfor.ma team produced a set of unique illustrations and animated collages that tell the story of the sturgeon and its habitat and explain why the fish is facing extinction.

Images: Screengrabs from features by the Ukrainian websites Platfor.ma and Reporters. Reproduced with permission.

If you liked this story, you may also be interested in Gamification: Should Journalism Be More Playful?

Tanya Gordiienko is a Ukrainian journalist and photographer. She is a PhD student at the School of Journalism, National University of Kyiv-Mohyla Academy. After working in a number of Ukrainian news media outlets, she joined the nonprofit organisations, Detector Media and Media Development Foundation. Tanya's main interests include new media, digital tools and storytelling.
» Photography and Video, Recent, Specialist Journalism » How Ukrainian media avoid “shiny things...