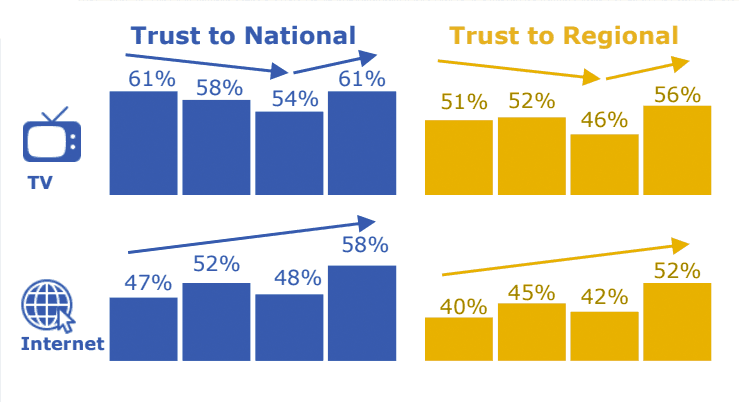 Since 2013, Ukraine has seen the EuroMaidan revolution, the annexation of Crimea, and a lasting armed conflict in the East with thousands of soldiers killed and more than a million people forced to leave their homes. These developments also had an effect on the country’s media sphere. A new study now shows how news consumption and views of the media have changed in Ukraine over the last few years.

Ukrainian TV Remains The Most Used And Trusted News Source

The national Media consumption survey 2018, conducted by InMind and Internews, takes place annually since 2015 and makes it possible to look at the situation over time. InMind representatives surveyed around 4,000 people between May and June 2018.

The study shows that the level of trust in Ukrainian television has increased for the first time since 2015. In general, trust in the media increased on both the national and local level. “Ukrainians have become more active news consumers and tend to compare more sources to verify the information they receive,” the director of Internews Ukraine, Wayne Sharpe, commented on the results of the survey.

Still, a closer look at the actual numbers shows that Ukrainian print and radio are trusted by less than 40%, and their overall audience share remains low. Since 2015, the radio audience declined by 9 percentage points (35% in 2015 vs. 26% in 2018). TV, on the contrary, keeps its leading position in terms of both consumer confidence and audience share. According to the survey, 77% of the interviewed participants had watched TV for news in the last month. As to the level of trust, nationwide TV is trusted by 61% of the population, while local TV is trusted by 56% of the respondents. According to the survey, especially older audiences trust TV a lot.

The Internet Audience Continues To Grow

The study also shows that more people used the internet for news this year. Both the websites of news organizations (60% in 2018 comparison to 54% in the previous year) and social media (53% in 2018, 45% in 2017) saw an increase in users. News websites are particularly popular among those aged 18 to 45, while social media are mostly by the under-35s.

When it comes to social media, Facebook is the most popular platform. Its share increased by 11 percentage points in comparison to the previous year (42% vs. 31%), which can be explained by the government blocking Russian social networking websites in 2017. The share of those using Twitter for news continues to remain very low (2% this year; 1% in 2015).

What’s New With The Russian Media?

The aggression and sustained disinformation campaigns coming from Russia have affected the news habits of Ukrainian media consumers, too.

According to a survey conducted by TNS and the Agency for Legislative Initiatives in 2011, around 37% of Ukrainians mostly trusted Russian media back then, in comparison to approximately 46% putting their trust in Ukrainian media and 36% in Western outlets.

The situation has changed much since the annexation of Crimea and the beginning of the armed conflict in the Donbass region in 2014. According to the Media consumption survey, the level of trust in Russian TV, print and radio remains low and makes 3-4% in 2018. Only Russian online media have 10% of trust among the Ukrainian audience, the study shows.

The audience of Russian media in Ukraine has been decreasing gradually for the last four years. While 12% of Ukrainians regularly watched Russian TV and 25% regularly visited Russian websites in 2015, these numbers have halved in the meantime. The situation is similar when it comes to Russian radio and print media. They, too, saw a steep decline.

The full presentation of the Media Consumption Survey 2018 results can be found here.

Halyna Budivska is a PhD student at the Mohyla School of Journalism, National University of Kyiv-Mohyla Academy. She is also the editor of the Ukrainian website of the EJO.
» Research » News Consumption And Media Trust In...