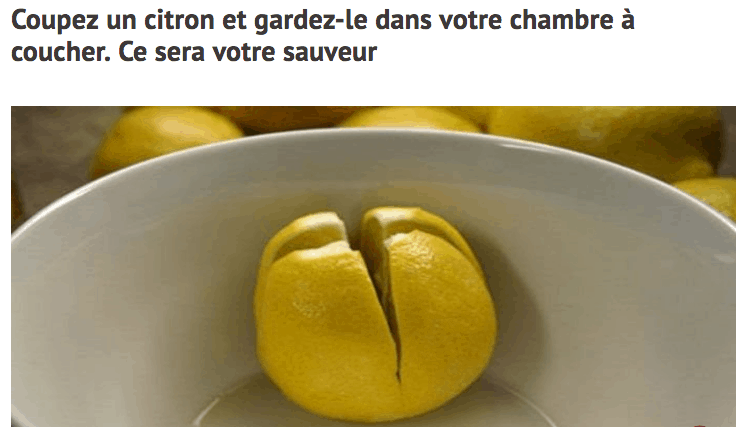 Lemons? Sante+ the most popular ‘false news’ site in France has limited reach, despite a high number of interactions on social media.

The first research into false news sites in Europe reveals that fake news sites in France and Italy  have a far more limited reach than is often assumed. Engagement with these websites is also very low compared to most established news outlets. A few sites draw many interactions on Facebook, but most do not.

The study, by the Reuters Institute for the Study of Journalism, finds that:

3. Despite clear differences in terms of website access, the level of Facebook interaction (defined as the total number of likes, comments, shares, and reactions) generated by a small number of false news outlets matched or exceeded that produced by the most popular news brands. In France, one false news outlet generated an average of over 11 million interactions per month—five times greater than more established news brands.

“A handful of false news outlets in our sample generated more or as many interactions as established news brands,” the report states. “La Gauche m’a Tuer, a right-wing blog, produced an average of around 1.5 million interactions each month, a figure broadly comparable to FranceInfo (1.35 million) and Le HuffPost (1.34 million). Le Top de L’Humour et de l’Info (a site that publishes humour, but also what others have identified as false information) generated just under 6 million monthly interactions similar to 20 Minutés—the most interacted-with news brand of the five. Santé+ Magazine—the most popular false news outlet in France by this and every other measure—received nearly as many interactions (11.3 million) as the five news sites combined.”

However, these outlets are the exception to the rule, according to the report’s authors. “In both France and Italy, false news outlets do not generate as many interactions as established news brands.”

Russian state-backed organisations like Russia Today (RT) and Sputnik are clearly different from sites that engage in for-profit fabrication of false news, but are often discussed as part of the problem of online disinformation. The study found these sites also have limited reach, engagement, and number of interactions in Italy and France, compared to established news sites.

Co-author of the report Dr. Richard Fletcher said “online disinformation is an important issue…but our analysis of the available evidence suggests that false news has more limited reach than is sometimes assumed.”

The public debate around false news and disinformation is ongoing across Europe, but so far the discussion has not been evidence-based. This is the first academic research aimed at measuring the scale of the problem in major European countries. It focuses on France and Italy where independent fact-checkers have identified a large number of sites that publish false news, and measures the reach of, engagement with, and interactions generated by these sites.

Caroline Lees is the Head of Communications at the Reuters Institute for the Study of Journalism. She is the former editor of the European Journalism Observatory’s English language site. She is a British journalist and has worked for The Sunday Times, London, for seven years including time spent in Delhi as South Asia Correspondent and as a news reporter and arts correspondent. She has also worked as foreign editor and assistant editor of The Scotsman, and for the Economist and Telegraph Media Group.
» Ethics and Quality, Recent, Research » Europe’s False News Sites ‘Have Limited...